END_OF_DOCUMENT_TOKEN_TO_BE_REPLACED

Historic site supervisors are a varied lot. We have backgrounds not only in history but also in museums, construction, art, and science to name a few. We tend to be quite attached to our historic sites, putting our heart and soul into educating the public about them and ensuring their preservation for future generations. It is not uncommon for visitors to the Former Governors’ Mansion State Historic Site, where I am the site supervisor, to ask if I live in the house since I seem so attached to it. No, I do not live in the house, though I live so close I can see my 1890 Victorian house from my office window.

Our hobbies and other occupations tend to intermingle and impact the work we do for our various sites and for the State Historical Society of North Dakota more generally. For instance, multiple state historic site staffers are also teachers and bring the skill of working with young people to their State Historical Society roles. Many staff also have hobbies that benefit their state historic sites with skills in carpentry, model making and textile arts to name a few.

When I’m not at the Former Governors’ Mansion or Camp Hancock State Historic Site, where I am also supervisor, I spend time honing my craft as a professional artist creating light paintings and capturing the night sky with my many cameras. You may have seen my photographs on the web or in publications of the State Historical Society, North Dakota Parks and Recreation Department, and North Dakota Tourism.

Our state historic sites are a great place for photography. Two sites I often visit once the sun goes down are Menoken Indian Village and Double Ditch Indian Village not far from Bismarck. Both sites offer great views of the night sky and both have 1930s Depression-era fieldstone shelters that make excellent foregrounds for photography. Of course, I visit other places, too, such as state parks, rural churches, and abandoned buildings—all of these locations tied together by their connection to North Dakota’s history. The opportunity to see and learn about North Dakota through my photography, in turn, makes me a better state historic site supervisor. In “Starry Night on the Prairie,” I created star trails over Double Ditch Indian Village State Historic Site by taking a few hundred photographs and layering them using computer software. The center of the trails is Polaris (North Star) which sits directly over the axis of the Earth and from our point of view does not move. My light painting “Night Walkers” is set against the backdrop of the Menoken Indian Village State Historic Site. The stone shelter at Menoken Indian Village State Historic Site under a dome of clouds, stars, and the northern lights. 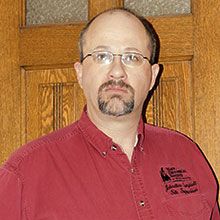 Guest Blogger: Johnathan Campbell
Johnathan Campbell has been around the SHSND for around a quarter of a century. He has been the site supervisor for both the Former Governors’ Mansion, and Camp Hancock State Historic Sites for over a decade, and previous to that was the fossil preparator for the North Dakota State Fossil collection.

Patience is a Virtue: Thompson Submachine Gun was Worth the Wait

Appearing in American cinema films from The Devil’s Brigade to Bonnie & Clyde, a Thompson submachine gun with a drum magazine has joined the mythos of America. Sold primarily to the military and law enforcement, “Tommy guns” were also purchased by private citizens. With the fictionalized and serialized tales of the “mob vs. G-men,” it became part of our collective conscience.

In the first part of March 1990, I joined the staff of the Museum Division of the State Historical Society of North Dakota. Within days, our senior curator, Norman C. Paulson, told me of a Thompson submachine gun at the North Dakota State Penitentiary that had been "promised" to the State Historical Society by the former and current warden when they decided to surplus or transfer the gun.

Paulson and James E. Sperry, State Historical Society superintendent, had been informed about the Thompson as early as 1968. Former prison guards had sporadically kept Paulson informed about the gun from 1973 into the 1980s. Since Norman was on the verge of retiring, it now fell to me to “keep my ears open” about that gun. The torch had been passed, and I continued to “keep my ears open” and wait. After 50 years, on Sept. 11, 2018, the submachine gun was transferred to the State Historical Society by the Penitentiary. Truly, good things had come to those who wait.

The “dope” on the gun
US Navy, Model 1928 Thompson submachine gun, .45 caliber, made by Colt's Patent Firearms Manufacturing Company for Auto-Ordnance Company. It was designed by John T. Thompson, a former US Army officer. This gun is fully automatic and uses either a 20-round stick magazine or a 50-round drum magazine.

It has three magazines:

Two XX-Type 20-shot stick magazines. These were preferred by law enforcement because they do not jam. One L-Type 50-round Thompson drum magazine. Popular in American fiction, this magazine can jam the action, rendering the gun useless.

Q: Was anyone shot by this gun?
A: Not to our knowledge.

Q: Can I buy a gun like this?
A: Not likely. The National Firearms Act of 1934 required that owners of this type of weapon must register them with the Bureau of Alcohol, Tobacco, & Firearms and follow the law regarding possession, transfer, and transport of this weapon. Mark Halvorson is the Curator of Collections Research.

North Dakota State Historic Site Staff Bring Diverse Skill Sets to Job
Patience is a Virtue: Thompson Submachine Gun was Worth the Wait
How Do I Love Thee: Valentine Ephemera Collection
State Historic Site Spotlight: Cannonball Stage Station
Securing Echoes of the Past: Safety at the State Museum
Archaeology Collections and the Science of Excavating Boxes
Solving Archives Puzzles: My Summer in the Stacks
Why Being a Custodian Is Like Being Batman
Civil War Reenactor, Living Historian, or Public Historian?
Understanding the Importance of Tinware Production throughout History