How do you fit 301 men, women, and children into 400 square feet of space? Very easily, if you are Rob Evans.

Rob Evans is the nationally and internationally known artist and muralist who was commissioned to paint the Double Ditch Village cyclorama[1], the focal point of the new Innovation Gallery: Early Peoples at the North Dakota Heritage Center & State Museum.

Mr. Evans and the concept team from the SHSND’s Archaeology & Historic Preservation Division spent months in preparation, researching and providing the documentation that would ensure an historically accurate depiction of a 16th-century Mandan village.

The village that was chosen for the mural is the Double Ditch Indian Village State Historic Site located 9.9 miles (as the eagle flies) northwest of the Heritage Center. 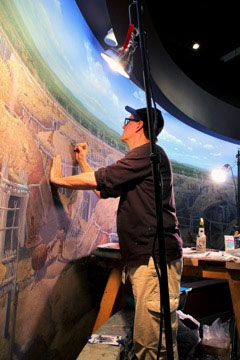 The hand-painted mural, crafted one small brushstroke at a time, shows one time in the life of the Mandan Indians. The date chosen was September of AD 1550. That very specific date was chosen by the concept team for a variety of reasons. Autumn would have been a bustling time in the thriving community, with the fall harvest and preparations for winter in full swing. The year AD 1550 would be historically accurate for the depiction of both the recognizable round earthlodge home of the Mandans in addition to its lesser known predecessor, the long, rectangular dwelling. The myriad of activities depicted include gardening, arrow-making, lodge and palisade repair, children playing, pottery making, and the preparation of corn, squash, and meat for winter storage. 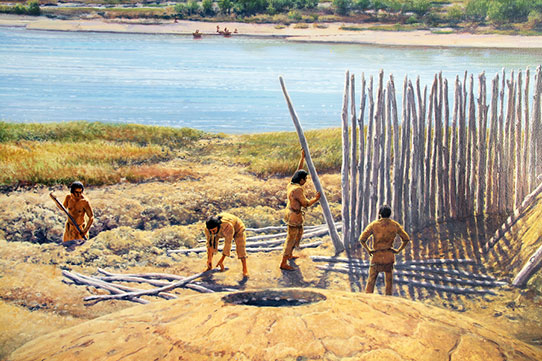 The cyclorama wall, 50 feet wide and 8 feet tall, provided Mr. Evans with 400 square feet of canvas for his original artwork. He didn’t paint on canvas, though. The cyclorama is a curved wall of sheetrock fastened to upright metal beams with many screws. The face of the sheetrock was covered with a coat of gesso, an artistic plaster medium, to provide a smooth, curved surface on which he could apply his depiction of the Mandan village. 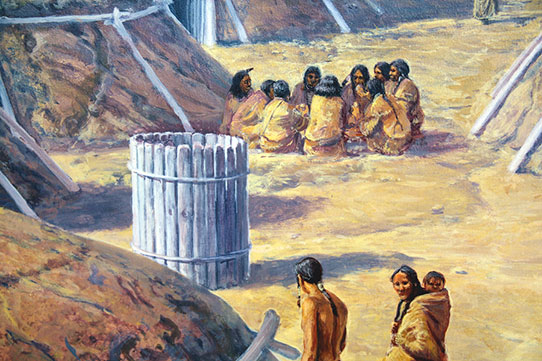 Three hundred (and one) acrylic men, women and children appeared over the three months Rob spent on the project. In addition, numerous bison skulls, earth lodge homes, herds of bison, and all of the fall activities of the village were carefully crafted. The images followed the prototype drawings and paintings that Rob had prepared in advance of the actual project. 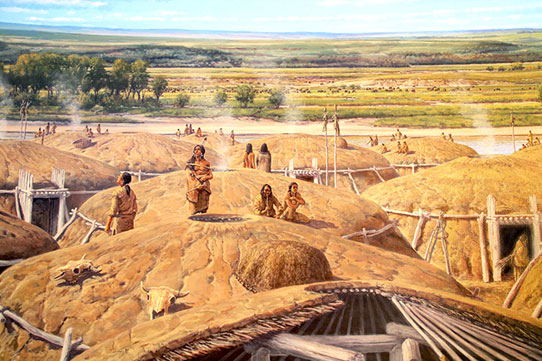 The concept team, as well as the Native American consultants to the project, deemed it very important to include the sounds of the village in the finished painting. Historical recordings were appraised and the sounds and conversations appropriate to the time and place were chosen to be included in the project. When no appropriate archived file was available, contemporary Mandan speakers and singers from Fort Berthold were recorded, along with the sounds of children playing, dogs barking, birds singing and other sounds. The audio is heard on eight individual speakers mounted above the cyclorama. Each of the eight sound files is specific to the scenes in the corresponding segment of the painting. The speakers provide a multi-channel soundscape that brings the original painting to life.

Lit from below by 96 feet of LED lights, adjustable for color and intensity, the cyclorama comes alive before the eyes of the Heritage Center visitor.

The SHSND, in partnership with the North Dakota Archaeological Association, will present a series of six lectures titled, “A Vision of the Village: The Making of the Double Ditch Cyclorama” on the second Saturday of each month at 2 p.m. The series began on Saturday, January 9 and will continue on the second Saturday of each month through the month of June. (Note: The one exception is May, when it will be held on the third Saturday.) All lectures will be held in the Russell Reid Auditorium at the North Dakota Heritage Center & State Museum.

The lectures are free and open to the public. If you would like to hear more about Rob Evans’ painting, the research that went into the 400 square feet of art and the many details of a 16th-century Mandan village, we encourage you to attend.

Oh, and we won’t confine you to 400 square feet of space.

[1] A cyclorama is a pictorial representation, in perspective, of a scene, event, or landscape on a cylindrical surface, viewed by spectators occupying a position in the center.