Clovis artifacts represent the earliest material evidence of human occupation in North Dakota. The Clovis tradition appeared on the Great Plains of North America about 12,000 to 13,500 years ago (Huckell 2014). The presence of unifacially or bifacially fluted stone spear points at an archaeological site is the primary distinctive marker of Clovis technology. However, not all Clovis sites contain fluted stone projectile points. 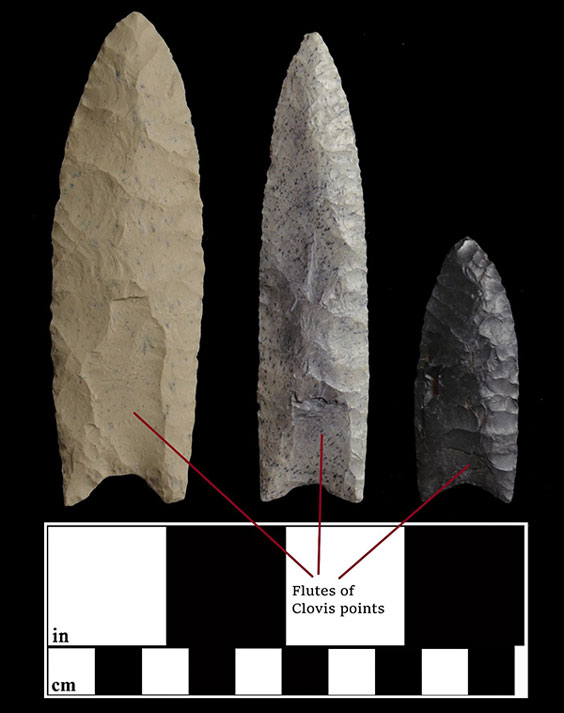 Casts of Clovis points from the Archaeology and Historic Preservation Education Collections. Clovis points are thin, fluted projectile points characterized by concave longitudinal shallow grooves that may have helped the points be inserted into spear shafts.

Various site types are associated with the Clovis tradition, including cache sites, encampments, quarry sites, and kill or butchering sites. Clovis artifacts found in caches more likely contain artifacts manufactured at quarry sites, then transported and placed into temporary storage. Caching behavior may indicate that individuals planned to set aside or hide artifacts for later use. Clovis sites are found all over North America and Central America, with caches often consisting of bifaces, projectile points, blades, flakes, and cores. One of the first caches discovered was named after the town of Clovis, New Mexico, where the ancient culture’s distinctive spear points were found together with mammoth bones.

In North Dakota, the Clovis artifacts were recovered from the Beach Cache site near the town of Beach in the western part of the state. About 103 artifacts (from a total of 135) were recovered from a dozen cache pits between 1970 and 1975, and most pits contained 8 to 10 stone tools. Some of the artifacts came from a disturbed plow zone. These blanks (partially worked/unfinished tools) were formed for easier transportation and could be made into a variety of stone tools. The Beach Cache site did not have Clovis points. It was dominated by bifaces. More than half of the Beach cached bifaces (58) were made of White River Group (WRG) silicates found at Sentinel Butte. Other bifaces were made from black chalcedony (12), quartzite (12), Rainy Buttes silicified wood (8), porcellanite (3), chert (4), and petrified wood (3) (Kilby and Huckell 2013; Huckell 2014). The sources of stone materials used in making the Beach Cache artifacts may indicate the movements of the Clovis hunter-gatherers. Although the Beach Cache lacks diagnostic Clovis projectile points, it is identified as Clovis based upon the presence of distinctive lithic technological attributes and radiocarbon dates (Kilby and Huckell 2013). 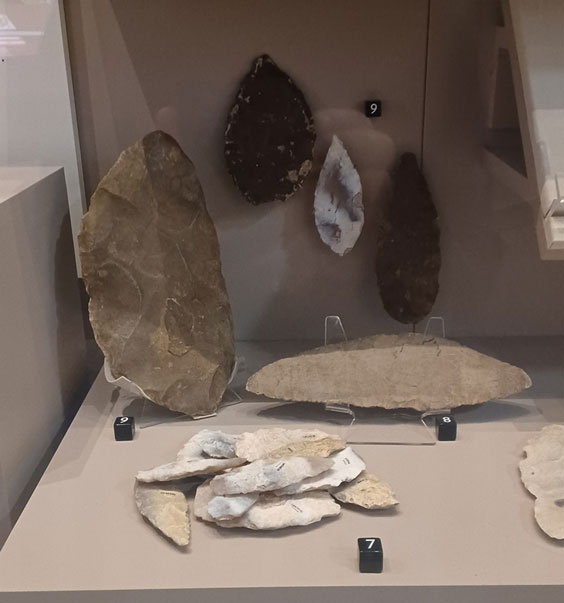 The Clovis hunter-gatherers were constantly on the move, following migrating game. They hunted mammoths (extinct elephantids), mastodons, Bison antiquus, and other smaller animals. “Consideration of the kinds of caches, their geographic distribution, and the source locations for some of the stone tools present in the caches can provide insights into the patterns of migration of Clovis groups more than 12,000 years ago and may, in turn, shed light on the geographic origins of Clovis technology” (Schroedl 2021: 121). More information on the Clovis Beach Cache artifacts and early peoples of North Dakota is available in “Traces: Early Peoples of North Dakota,” by Barbara Handy-Marchello and the late Archaeology and Historic Preservation Department Director Fern E. Swenson. The book, published in 2018, is available for purchase at the North Dakota Heritage Center & State Museum store in Bismarck. 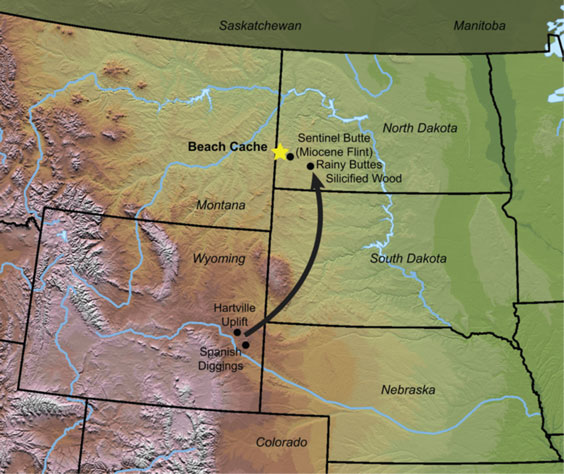 The small group of Clovis people that camped at the Beach Cache site may have come from the south and west, traveling from what is today eastern Wyoming via western South Dakota. Traces: Early Peoples of North Dakota, 2018

Huckell, Bruce B. 2014. “But How Do We Know If It’s Clovis? An Examination of Clovis Overshot Flaking
of Bifaces and a North Dakota Cache.” In Clovis Caches, Recent Discoveries and New Research, edited by Bruce B. Huckell and J. David Kilby, 133–52. Albuquerque: University of New Mexico Press.

The State Historical Society of North Dakota’s Audience Engagement & Museum Department has accepted several interesting donations to its collections over the past few months. Let me take you on an unintentionally all-dance and music tour of these.

For starters, we had a sudden run of offers, which included square dancing items. By “sudden run,” I mean two donations. Which doesn’t seem like a lot, but it’s weird that it happened twice.

The first donation was a collection of items from the Belles ‘N Beaux square dance club. 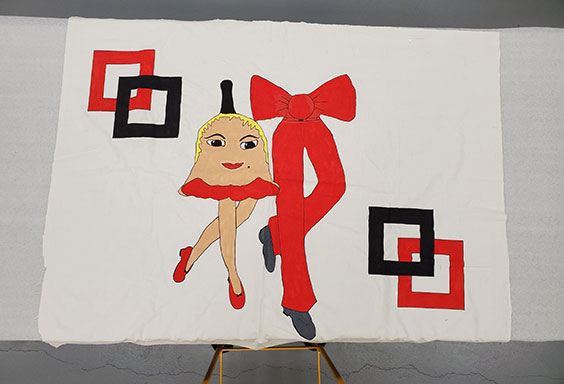 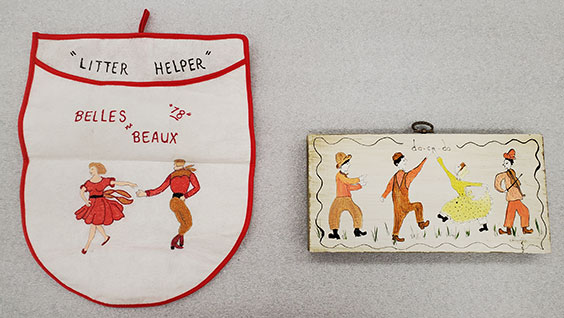 Delightful artifacts related to the square dancing tradition of Belles ‘N Beaux. I personally aspire to the energy of the dancers in the image above. SHSND 2022.00035.00001-.00003

The second donation from the wonderful world of North Dakota square dancing was a Squarenaders tapestry from the community of Shields. The donor’s mother, Alice Ternes, was one of the original Squarenaders when the club started in the 1960s. She recalls that the Catholic priest from St. Gabriel’s parish started a square dance club with and for the people of Shields, as there wasn't any type of entertainment in town at the time.

Alice and her husband, Aloys, scheduled their farm work to allow them to square dance as often as possible. She remembers how some club members went to friends’ houses (usually neighboring farmers), strongly encouraging them to join and learn the dance. Initially hesitant, many neighbors were surprised when they were able to learn the steps and really enjoyed the activity.

Unfortunately, the Shields dance hall where the Squarenaders hosted their events burned down in 2002. But Alice still recollects that the smooth wood floors in the hall, where this banner below also likely hung, were perfect for dancing. 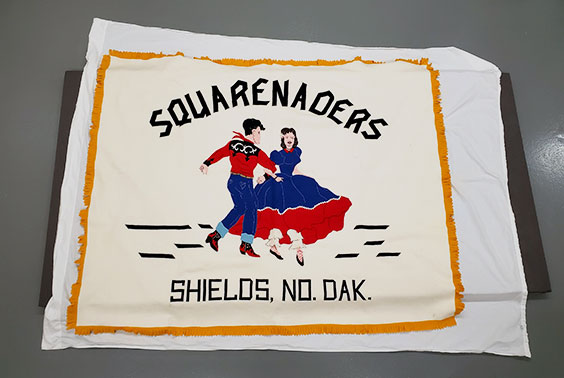 To help fill out our collection, the State Museum is now looking for donations of square dance dresses, skirts, and suits worn by people who kicked it up over the years with any of North Dakota’s square dance clubs. 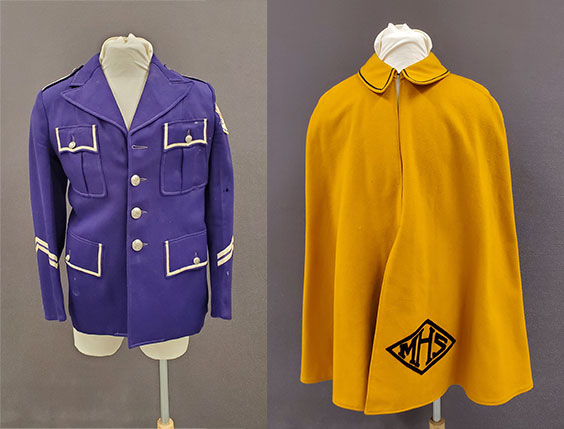 Evelyn Stastny’s uniforms from her days playing clarinet with both the Mandan Elks Band, left, and the Mandan High School Band. SHSND PA-2022.080

If you are interested in donating objects to the agency’s museum collection, please get in touch. You can fill out a donation questionnaire at this link: Potential Acquisition Donor Questionnaire - State Historical Society of North Dakota. We can’t wait to hear from you!