An archaeologist on our staff is researching Like-A-Fishhook as part of her dissertation work. So, part of the excitement is getting to look closely at the objects as she inventories and photographs them. Also, as an older collection, the objects are in need of being repacked. The rest of the excitement has to do with the site itself.

Into the 19th century, the Mandan, Hidatsa, and Arikara peoples were prosperous traders, hunters, and farmers who lived in earthlodge villages and grew corn, beans, squash, and sunflowers in large gardens along the Missouri River. But in 1837 a small pox epidemic took a large toll on native populations in North Dakota. The loss of so many people during the epidemic, combined with ongoing conflicts with nomadic groups, led the Mandan, Hidatsa, and Arikara peoples to settle together for mutual protection. By 1845 Hidatsa people and some Mandan people had settled at a new village site nestled in a large bend of the Missouri River. The large bend was shaped like a fish hook—which is why the village was called Like-A-Fishhook. The Hidatsa were later joined by more Mandan people, and by 1862 the Arikara people joined the village as well. Multiple cultures, languages, and traditions lived in close proximity in this village, making it very unique. Like-A-Fishhook was the last traditional earthlodge village settled in North Dakota. Situated next to Fort Berthold, it was a home and a hub of trade for people for more than forty years. The US government, however, began encouraging the people at the village to resettle, and by 1889 the village was mostly abandoned.

Most of the objects in our Like-A-Fishhook collection came from the River Basin Surveys. The River Basin Surveys were started as a series of archaeology projects in the mid-1940s sponsored by the National Park Service and coordinated by the Smithsonian Institution. After World War II dam building became a popular method for flood control, but many archaeology sites located on rivers were being destroyed as a result. In North Dakota, many of the early River Basin Surveys attempted to record important places along the Missouri River before they were flooded by the construction of the Garrison Dam. The location of Like-A-Fishhook is now underwater, but several excavations took place at the site before the river flooded it. The artifacts and records from the River Basin Surveys are part of the surviving record of the site. 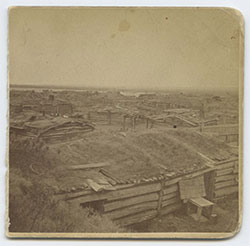 We are now are going through the objects in the archaeology collection to photograph, record, and repack the artifacts in archival materials (in bags and boxes that will not damage the artifacts over time). We have only just started this project, but here are a few of the things that we have seen so far.

I was excited to see some cloth fragments! Cloth does not survive very well in North Dakota’s climate, so it is not very often that we have any in our archaeology collections. What do you think was made from this cloth material?

There was a small child-sized leather shoe sole. I would like to know who this shoe belonged to and how old he or she was when it was worn.

The first few boxes contained a lot of plant materials. There were many charred corn cobs, plum pits, and squash seeds. Plant remains are interesting because they can show what types of food people were collecting or growing, harvesting, and using or eating.

There were also some fish scales, so I am assuming someone enjoyed a good fish dinner.

We have many more boxes of Like-A-Fishhook artifacts to go through, so hopefully I will be able to share some more of the objects that we find in the future!