The employee notified a Forest Service archaeologist so the finds could be documented, mapped, photographed.1

As an archaeologist myself, I can tell you that it is pretty unusual to find a map accompanying any artifacts you discover. But that is exactly what the Forest Service archaeologists found. The note inside the bottle included a hand-drawn map with instructions to a “grand burial” that “bears treasure.”2 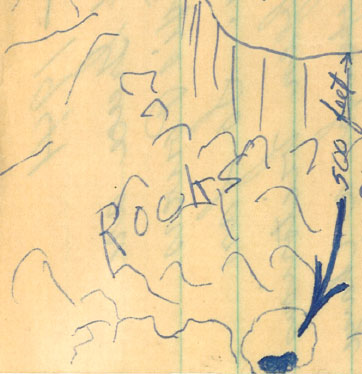 And the map did lead archaeologist to the “treasure”. But this wasn’t Hollywood-style pirate treasure—no silver, no gold, no pieces-of-eight. It was treasure of a different kind—an informal time capsule. The “grand burial” consisted of several bottles, a jar, and a metal lunch box that had been buried in the ground by a local man. 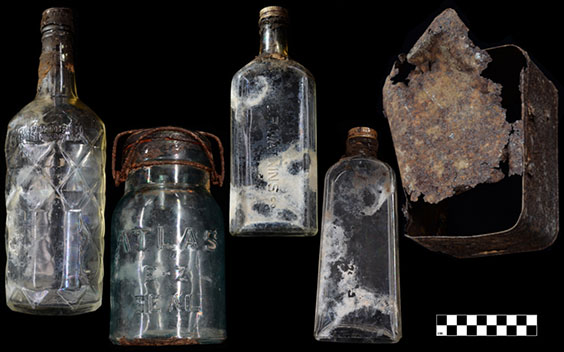 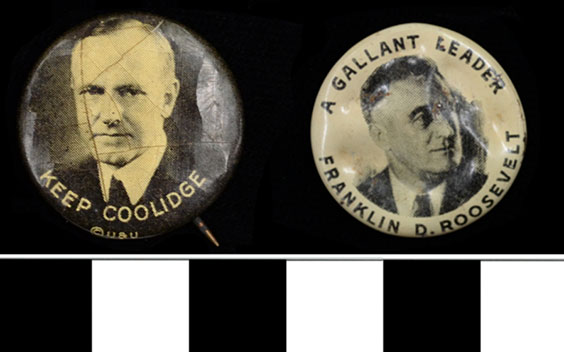 What would you want people who found your time capsule to know about you? Harold Foreman buried the time capsules between January and March, 1941.3 We know his personal details from the notes that he wrote and buried with the objects in the containers. Harold was twenty-seven years old when he buried the objects. He and his wife Pauline lived with his parents in Slope County, ND.4 Harold was the oldest of nine siblings.5

Would you write about current news? When Harold buried his capsules, the United States had not yet entered World War II. But the war was progressing elsewhere in the world, and Harold followed what was going on. He wrote about wondering who will win and hoped that the Lend-Lease bill proposed to send aid to Great Britain will pass U.S. Congress.6

Would you want people to know what technology is like? What transportation is like? Harold enclosed magazine clippings of cars, trucks, tractors, and trains. 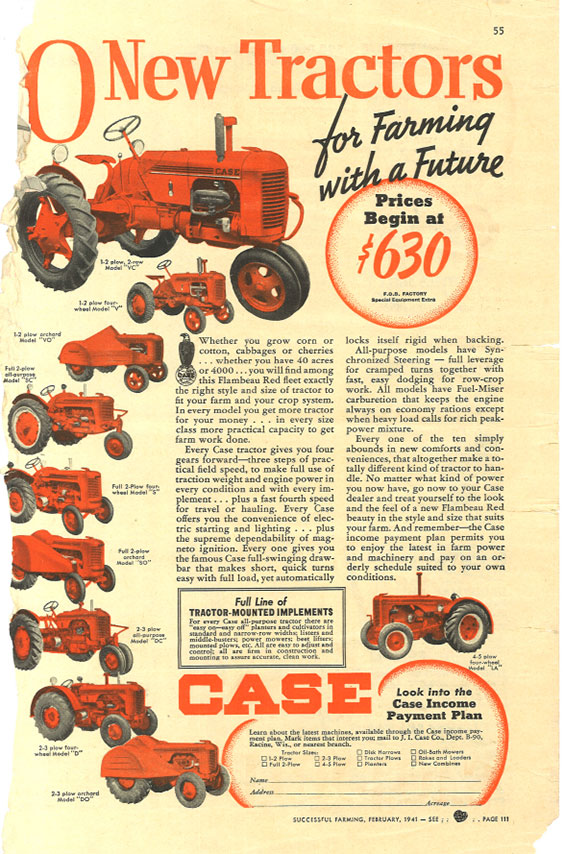 My favorite clipping is a glamorous full page color (complete with silver foil!) advertisement for a Streamliner railcar. 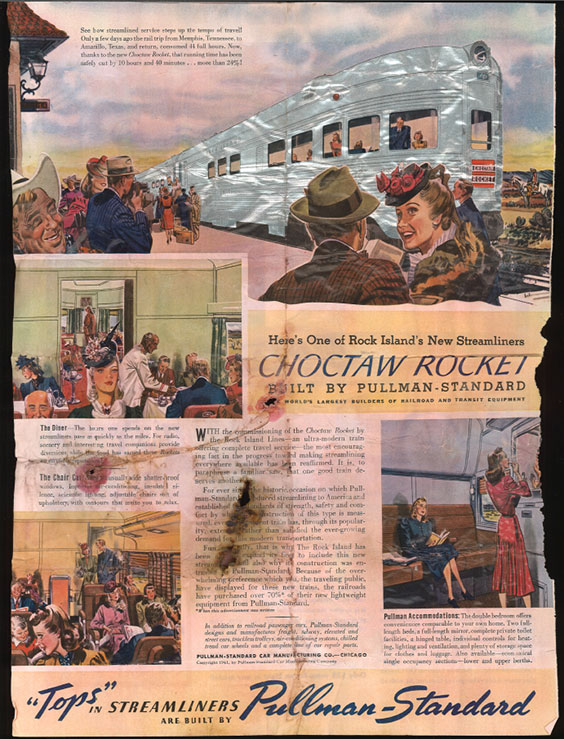 Advertisement for Pullman-Standard Streamliners (2012A.76.52) 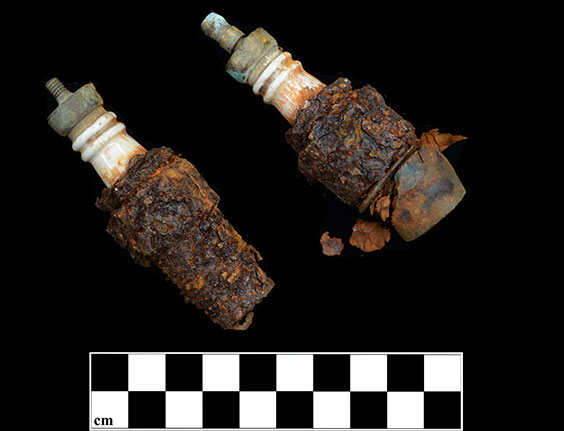 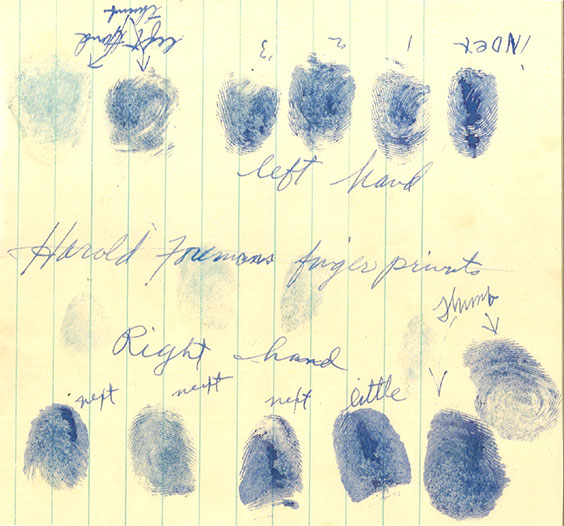 Another object is an “old pocket watch” that traveled with Harold “through the States”.10 On the back of the watch are visible fingerprints—do these belong to Harold? 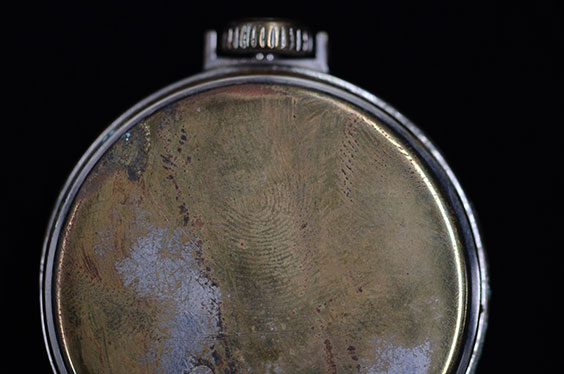 Close-up of pocket watch with visible finger prints. Do these fingerprints belong to Harold? Did this watch go with Harold on his trip to visit his grandmother in Missouri? (2012A.76.89)

He described a trip he and his wife took through several states to visit his grandmother in Missouri.11 He even included a letter written to him by his eighty two-year-old grandmother.12 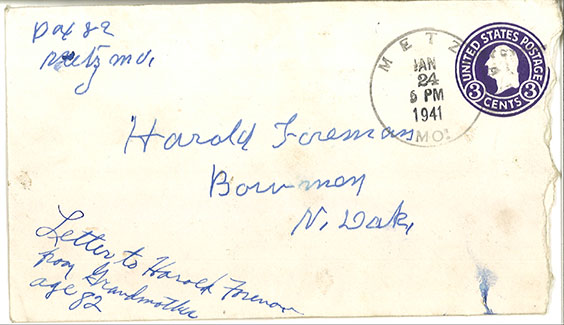 Envelope containing letter from Harold’s grandmother in Missouri (2012A.76.37)

Would you include pictures? Harold included photo negatives with scenes from North Dakota including badlands near Waterford City, a wheat field, and a burning coal mine near Ranger. 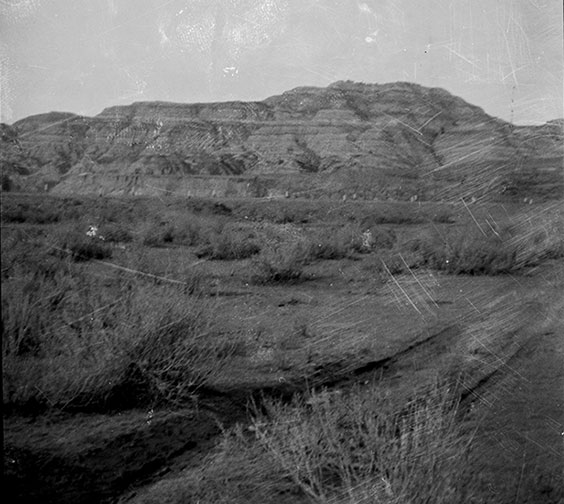 Would you include a photo of yourself? Would it be serious? An action shot? Or maybe a funny photo? Harold included a photo of himself making muscle arms and a funny face.

Would you want to know who finds your capsule? Harold wanted to know. He even offered a reward if the finder contacted him.13 But Harold wasn’t sure how long it would take for someone to find it, so just in case he was no longer living in North Dakota, he left a list of friends and relatives to contact.14 U.S. Forest Service archaeologist Mervin Floodman did look for Harold.

Unfortunately, Harold died in a car accident in the Pacific Northwest in 1972.15 However, Floodman was able to contact his youngest brother, Howard, in 2006. Howard did not know about the time capsule that his older brother had buried.16 But on one of Harold’s notes, there is a doodle Howard made when he was only six. 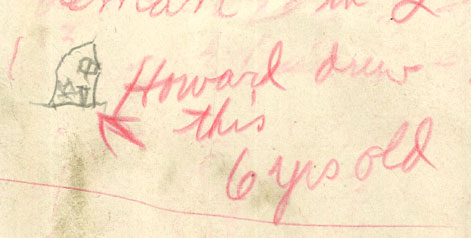 It is rare for an artifact collection to provide details about one individual’s life. That is what makes the Foreman time capsule so intriguing. What would you want someone in the future to know about you?

Special thanks to the U.S. Forest Service for permission to write about their collection. Special thanks as well to photo archivist Sharon Silengo and volunteer Robert Porter in Archives for their enthusiastic expertise in scanning the photos and negatives.