The State Historical Society of North Dakota's (SHSND) mission is to identify, preserve, interpret and promote the heritage of North Dakota and its people. These four objectives frequently co-align at our state historic sites, as we’ll see in this discussion about aerial photography at Double Ditch Indian Village State Historic Site.

The SHSND’s Archaeology & Historic Preservation Division, (among many other responsibilities) manages the 56 state historic sites in the state. These sites interpret many different stories about the history of North Dakota, and the people who call it home. Thousands of people from all over the world enjoy visiting these sites each year. As a research archaeologist working for the SHSND, part of my job is to assist with the identification, interpretation, and preservation of these sites. 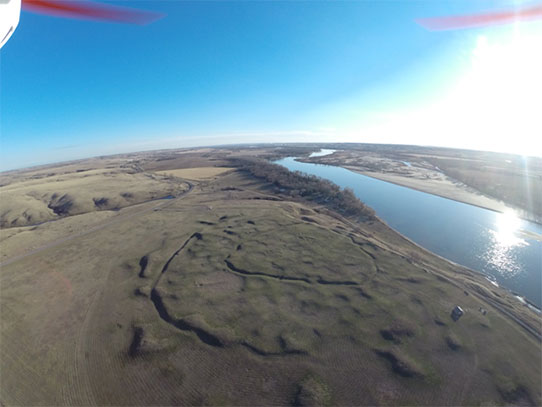 Double Ditch Village State Historic Site is located eight miles north of Bismarck. The site marks the location of a large earthlodge village inhabited by the Mandan people from the late 1400s to 1785, and is recognized as one of the best-preserved earthlodge villages on the Northern Plains. The site name refers to the presence of two fortification ditches visible on the site surface. We know through geophysical and archaeological investigations that there have actually been four fortification ditches over the course of the site’s occupation. Perhaps 2000 people lived there at its peak, making it larger than many small towns in the state of North Dakota today. On-site interpretation includes signs with information about the site from past and recent excavations. The site is open year-round, and thousands of people visit annually.

Archaeologists have used aerial photography for over 100 years to help us visualize and understand archaeological sites. Aerial images collected at the prehistoric monument of England’s Stonehenge in 1906 are recognized among the first uses of aerial photography to map and interpret an archaeological site. Many different technologies have been employed to capture aerial images since that time. Balloons and kites were some of the earliest platforms used to acquire the images, while fixed- and rotary-wing wing aircraft (helicopters) are most frequently used today. Some of the first examples of aerial images of archaeological sites in North Dakota were those acquired by the United States Department of Agriculture in 1938. 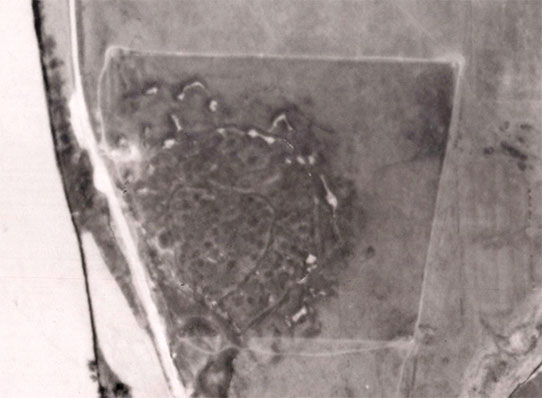 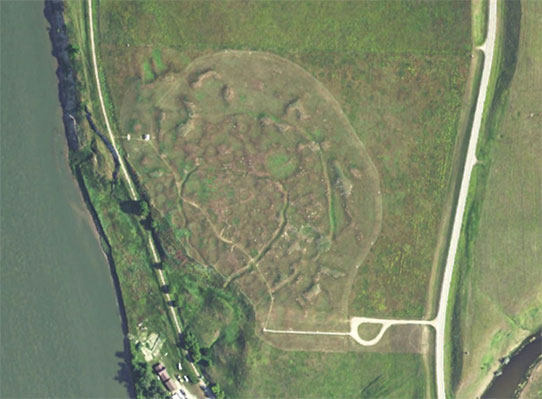 The U.S.D.A. still makes regular flights across the country for agricultural purposes. The two images above illustrate modern developments made in the vicinity of Double Ditch, among them the relocation of State Highway 1804 to the east side of the site and the creation of a visitor parking loop. Many site features can be seen in this image, including multiple earthlodge depressions, the two fortification ditches visible on the surface, and many of the large midden mounds present.

The technology associated with aerial photography continues to evolve. We’ve used a variety of aerial platforms to capture images of Double Ditch over the years. Planes, kites, and powered parachutes (sometimes called “parafoils”) have been used in recent years with a variety of film, digital, and thermal cameras. In 2010, an aerial remote sensing technology called LIDAR was used to acquire detailed elevation data on the ground surface.

I’ve recently used an unmanned aerial vehicle (or quadcopter) to monitor and document ongoing erosion issues at the site. Our quadcopter is a GPS-enabled, remote controlled vehicle that uses a small digital camera for taking images and video. This technology has allowed us to see the extent of the erosion at Double Ditch from multiple angles, and in greater detail than ever before. These images have also enabled engineers to identify specific erosional forces affecting the site and to propose solutions to the problem. Flights of the SHSND quadcopter occur only over property managed by the SHSND, and always observe guidelines established by the Federal Aviation Administration (FAA) for the use of this technology. 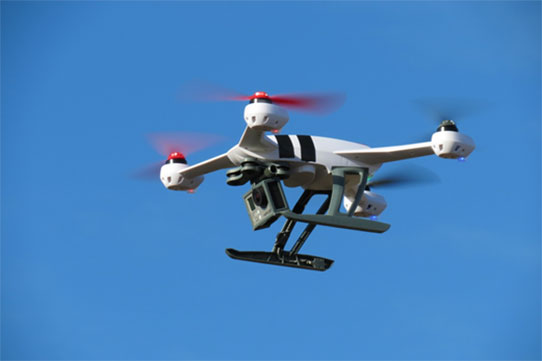 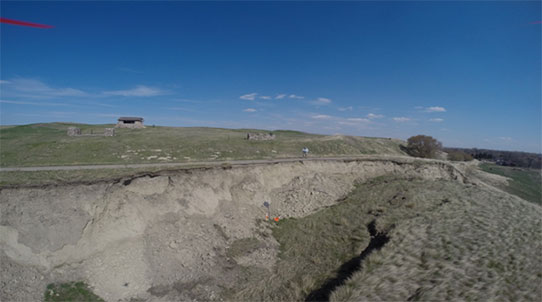 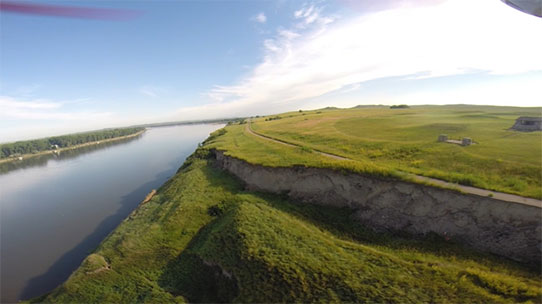 The ongoing erosion at Double Ditch represents a significant threat to the site’s integrity, and North Dakota’s Governor has asked the State Legislature to address the issue in the 2015 legislative session. The aerial images captured with the quadcopter at Double Ditch will continue to provide documentable evidence of both the scale of this erosion, and the speed at which it is occurring.