Susan is an architectural historian who loves old houses, barns and schools. She reviews projects that might impact cultural resources and researches earthen construction.

Archaeologists and architectural historians use initial processing labs or wet labs, containing sieves, to discover tiny bits of evidence that measure big changes in technology. We included one of these rooms in the recent expansion at the Heritage Center. It is used to sort and process artifacts in the Archaeology and Historic Preservation Division (A&HP). The sieve stack (also known as a size-grader) and sorting trays help scientists sort soil, artifacts, and organic material. Researchers are usually searching for objects or fragments of objects that someone made or modified at some time in the past.

In northern plains archaeology, detailed procedures set out in 1989 by Dr. Stanley Ahler outline how to quickly make sense out of hundreds of bags of cultural material by sorting and weighing according to size grades. Viewed as an especially useful way to analyze lithic debitage (the flakes of stone that are removed from a cobble or preform when someone makes a stone tool), archaeologists statistically analyze hundreds or thousands of flakes that have been sorted by size. By doing so, researchers can gain new insights into methods of stone tool production over thousands of years. 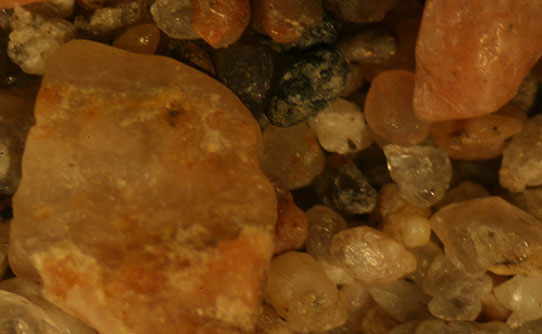 Architectural historians and masons also use such labs, equipped with sieves, microscopes, and Munsell color charts. They need the same tools to determine the best match for repairs or repointing between stones and bricks. These researchers try to match the mortar being used for restoration to the historic mortar. To match the sand in a mortar sample taken from an old brick or stone wall, you must first remove the binding element by digesting it in acid. If the original masons used a lime-based mortar, the lime will bubble away, leaving clean and rather attractive sands behind, as seen under the microscope. If the original mortar used a Portland cement, the acid digestion process will probably leave some hard chunks of cement with the sand.

Although Portland cements were known earlier, this technological change from lime mortars to Portland cement became widespread in the 1930s. Use of Portland cement was a fundamental change in building technology. Much of the art and science of lime-based mortars was nearly lost when mixes became far more standardized using Portland. Careful analysis of historic lime-based mortars and maintaining libraries of those recipes allows for nearly exact replicas in mortar when applied next to historic mortar. 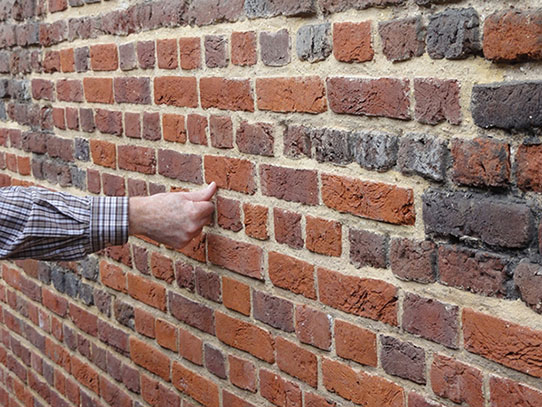 Here both new bricks and new mortar needed to match the originals on the left and right of the photo. The architectural historians decided to match both as they were originally made rather than try to match the currently worn brick through artificial antiquing. The mortar will weather out in a rainy season to wash away the fines and leave the sand more exposed. Photos by S. Quinnell

So the same laboratory equipment is used in different applications to discover more about our pasts. In northern plains archaeology the wet lab allows analysis of many minute pieces from our ancient past, from Paleoindian big game hunters through the days of military forts. Similarly, mortar analysis performed with this same equipment can be used to understand changes in building mortar technologies from the earliest stone and brick buildings to the structures of the recent past.

1989b Mass Analysis of Flaking Debris: Studying the Forest Rather Than the Trees. In Alternative Approaches to Lithic Analysis, edited by D. O. Henry and G. H. Odell, pp. 85-118. Archaeological Papers of the American Anthropological Association Number 1.