Double Ditch Indian Village State Historic Site is one of the most spectacular archaeological sites preserved on the northern plains. The earthlodge village was a regional trading center occupied for nearly 300 years (AD 1490-1785) by the Mandan people. Due to its archaeological significance, the site is listed on the National Register of Historic Places. 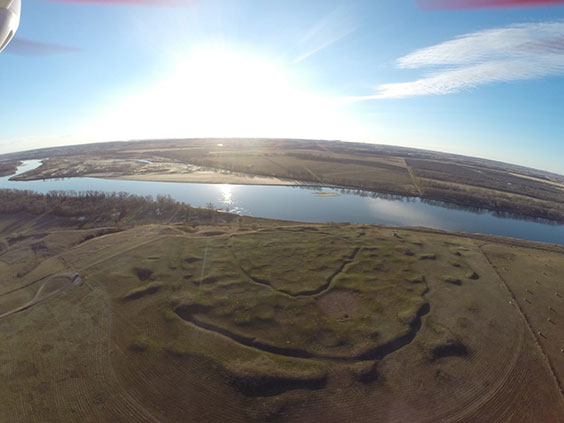 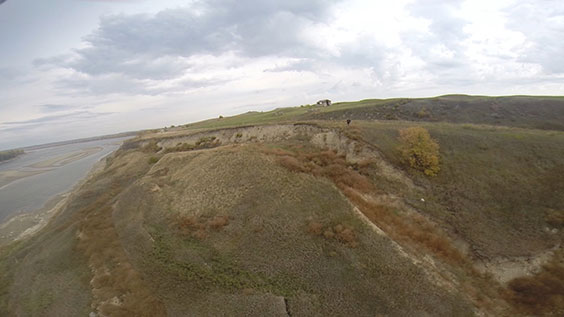 The State Historical Society of North Dakota, partnering with the Mandan, Hidatsa, and Arikara Nation, the North Dakota Legislative Assembly, and other groups and individuals supporting preservation efforts mobilized after the 2011 flood to address this critical threat to the site. Left unaddressed the rotational erosion would have continued, eroding deeply into the village and causing catastrophic damage to the site. 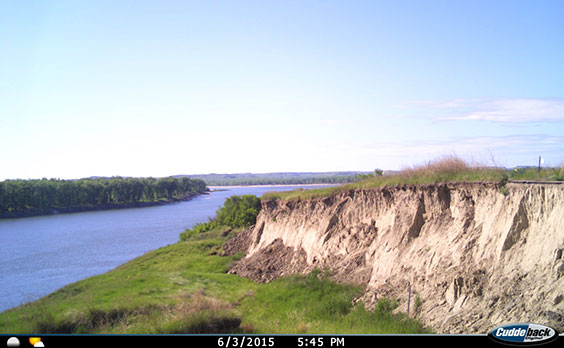 Image of rotational erosion front at Double Ditch from a trailcam that monitored the location from March 2015 - June 2017.

An engineering plan was developed to stabilize 2,200 linear feet of riverbank from the effects of rotational erosion exposing numerous burials at the site since the 2011 flood. The State Historical Society is grateful to the 2013, 2015 and 2017 North Dakota Legislative Assemblies for appropriation of the $3.5 million dollars necessary to move this important preservation project forward. 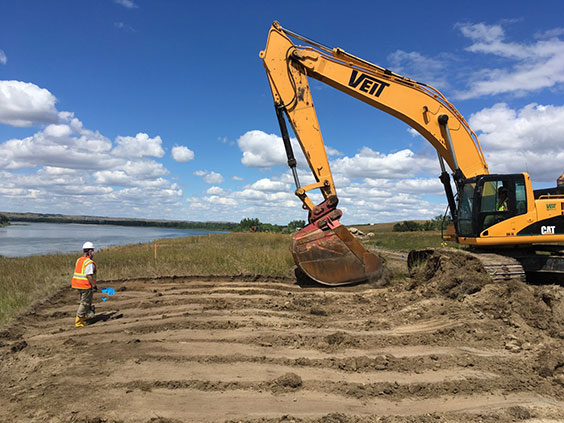 Bank stabilization began in July 2017, and was anticipated to last about five months. Prior to the start of construction, it was anticipated that additional burials would be identified. The State Historical Society and MHA leadership cooperated to follow state laws and the cultural practices of the Mandan to complete this sensitive work. Archaeologists from the State Historical Society were on hand daily throughout the construction period to monitor earth moving activities. All exposed burials were cared for according to proper protocol and will be interred in private ceremonies of the MHA nation after repatriation. 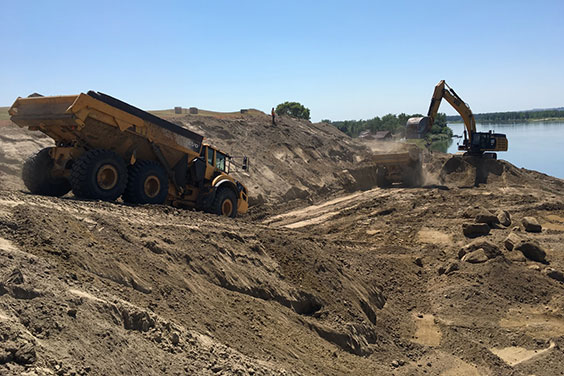 The engineering plan implemented to stabilize the riverbank involved removing many tons of soil to reduce the weight on the bank slopes at the site. Installation of a rock -filled trench and hundreds of steel pipes vertically driven parallel to the river bank provide mass and strength to further stabilize the slopes. 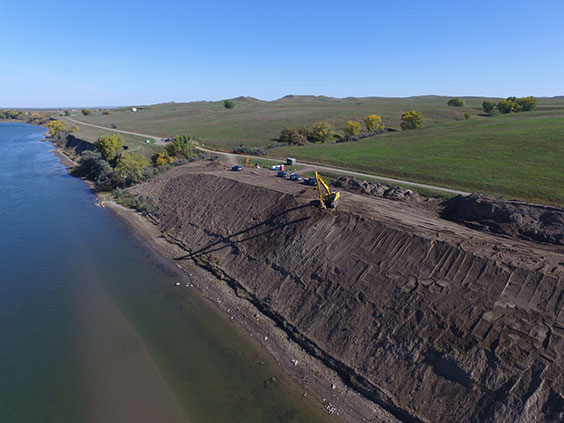 A trackhoe works to stabilize a slope during the Double Ditch bank stabilization project – August 2017. Quadcopter image by Dwayne Walker. 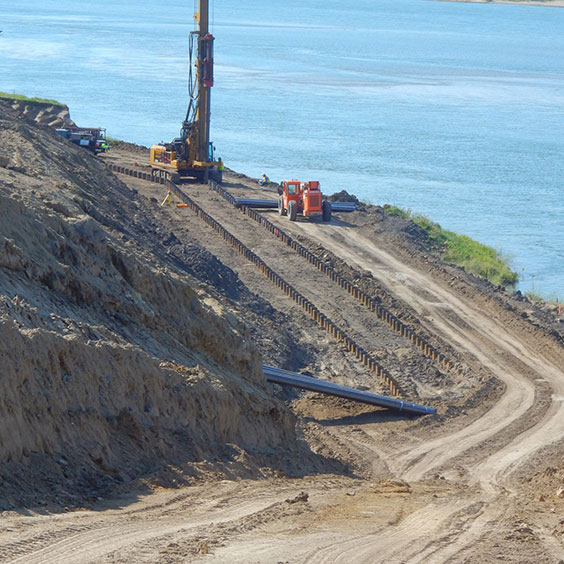 Heavy construction equipment was used to install steel pipe piles parallel to the Missouri river bank during the Double Ditch bank stabilization project – August 2017. The rock key trench is already installed in this image, buried between the pipe piles and the river bank. 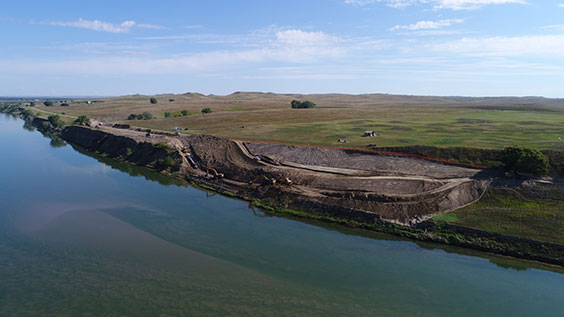 Aerial overview of the Double Ditch bank stabilization project – August 2017. The two trackhoes in this image are working to install a 20’ deep rock key trench as part of the stabilization plan. Quadcopter image by Dwayne Walker.

On a personal note, I’m humbled to have been involved with the bank stabilization activities at Double Ditch. Since 2002 I’ve been fortunate to be involved in archaeological research conducted at Double Ditch, and the site is very special to many people. It’s my belief that all those involved with the Double Ditch bank stabilization were part of a preservation project whose importance and sensitivity can hardly be overstated. Had the funding not been available and the project not been undertaken, the alternative would have been for the site to continue to be damaged and further eroded by the Missouri River. 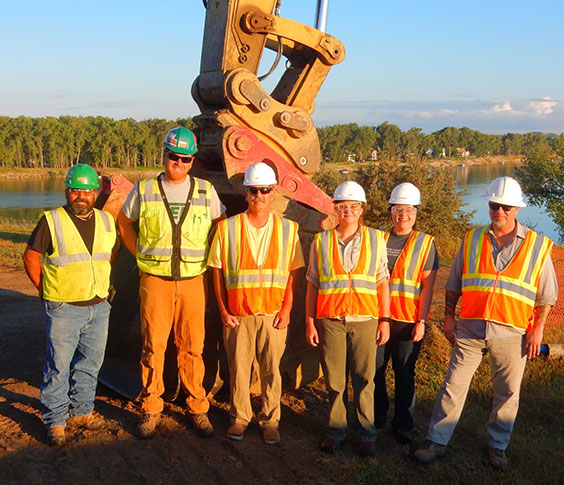 The bank has been reshaped and landscaping with native plants was installed in early November. Interpretive aspects will be developed over the winter and installed in early summer, after the vegetation has had a chance to develop. 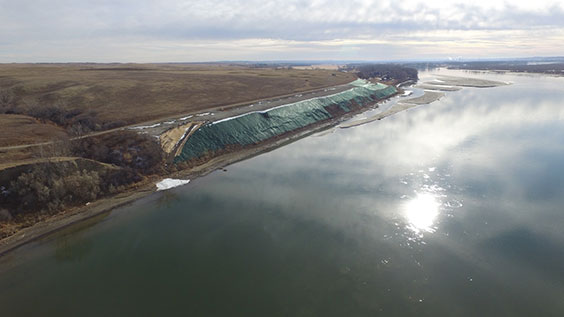 Aerial overview of the Double Ditch bank stabilization project – November 14, 2017. View is to the south. The dark patch on the landscaped slope marks the area covered with an erosion-control product called filter fabric. Filter fabric is used to help prevent erosion until the area develops heavier vegetation. Quadcopter image by Dwayne Walker. 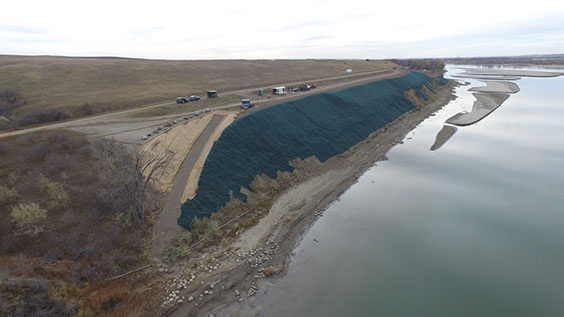 Aerial overview of the Double Ditch bank stabilization project – October 25, 2017. View is to the south. The dark patch on the landscaped slope is a portion of the area covered with an erosion-control product called filter fabric. The location of a non-motorized canoe and kayak access trail is also visible in this image. An erosion-control product called Geo Cell was used in the construction of the trail. Quadcopter image by Dwayne Walker.