Within the State Historical Society of North Dakota collections, we have lots of fragments. The archaeologists have fragments of stone that come from the manufacturing of tools. These flakes help them understand how the tools were made and used on the site where they were found Paleontologists have fragments of bones that help them better understand prehistoric life and the environment the animals lived in. But are fragments of buildings, ships, or other historic artifacts the best way to understand the times and the people who used or built them? Yes and no.

In the museum collections, we have rust scales, a splinter of wood, and a metal plaque that have a connected history. 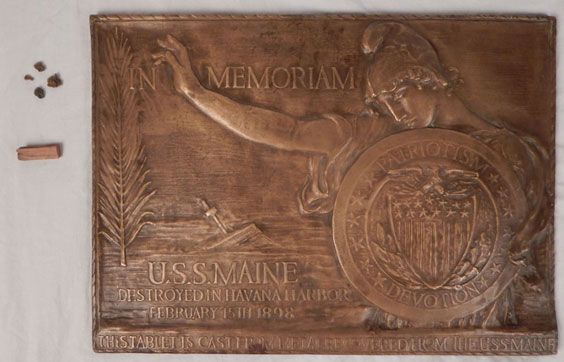 How are these objects connected?

Let’s take a closer look at these fragments of history to see what they can tell us about a time in our past. The rust scales are believed to be from the mast of the battleship USS Maine, the splinter of wood is said to be from the Spanish cruiser Reina Cristina, and the plaque is a memorial made of metal from the hull of the USS Maine.

To understand the connection these three pieces have, we will have to go back to the late 1890s when the United States was not the global power it is today. There were no new lands our country could claim, and we were looking to acquire more territory. The only option was to get the lands from a global power, one way or another. At that time, Cuba was controlled by the militarily weak Spain. Under the guise of helping the Cuban people revolt against the Spanish, the United States sailed the USS Maine into Havana Harbor in January 1898. On Feb. 15, there was an explosion that ripped a hole through the hull of the Maine, sinking the ship and killing 260 sailors. Of course, the Spanish were assumed to be responsible despite the lack of evidence. President McKinley tried to reach a compromise with the Spanish government, but publishers like William Randolph Hearst and Joseph Pulitzer whipped up American sentiment against the Spanish with slogans like “Remember the Maine, to Hell with Spain!” By April 21, McKinley succumbed to a variety of pressures from the press, the public, and politicians and signed a joint congressional resolution that authorized him to use force to supposedly help Cuba gain independence. Shortly thereafter war was declared, and we were now fighting the Spanish-American war.

A few years earlier, in 1896, Theodore Roosevelt, then the Assistant Secretary of the Navy, got his friend Commander George Dewey the post of Commander of the Asiatic Squadron. Shortly after the start of the Spanish-American War, Dewey was charged with either capturing or destroying the Spanish Pacific fleet that was near the Spanish-controlled Philippines. Dewey entered Manilla Bay on the night of April 30. The following morning, they began the attack. It took them six hours to defeat the Spanish Pacific Squadron. One of the ships sunk that day was Spanish Admiral Patricio Montojo’s flagship, the Reina Cristina.

By Aug. 13, 1898, Spain surrendered, and Cuba was a protectorate of the United States, which now also had control of Guam and Puerto Rico. By 1902, the U.S. also had control over the Philippine Islands after fighting and defeating the Filipino people. Our country had become a global power with territories in the Caribbean and in the Pacific.

In 1912 the United States raised the USS Maine, which was partially submerged in Havana Harbor. The mast was relocated to Arlington National Cemetery as a memorial to the USS Maine. Lt. C.L. Hansen, U.S. Navy, was a cadet at Annapolis and obtained these rust scales from the mast. He sent them to his father, Mr. C.L. Hansen of Bismarck, who presented them to the State Historical Society in 1921. 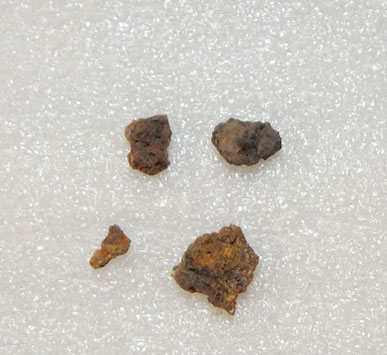 Rust scales from the mast of the USS Maine. SHSND 2075

Pieces of the hull of the USS Maine were salvaged and recast into over 1,000 memorial plaques in 1913. Each plaque is numbered; ours is 351. According to our files, it was given to a relative of a man who died aboard the Maine. We don’t know the name of the sailor or the relative who received the plaque. It went through many hands—some unnamed, others named—before coming to Sister Quintin at the St. Joseph School in Mandan, who donated it to the State Historical Society in 1945. 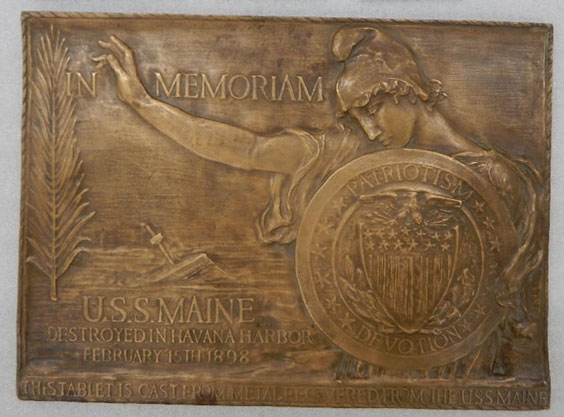 Memorial plaque made from metal salvaged from the USS Maine. SHSND 10116

As mentioned, the Spanish Admiral Montojo’s flagship, the Reina Cristina, was sunk in Manilla Bay by Dewey’s forces. Unfortunately, we don’t know who or under what circumstances the splinter of wood was collected, but in that kind of a battle, we must wonder how they knew that this piece of wood was even from the Reina Cristina. It reminds me of the multitude of pieces of the true cross that are in churches throughout the world. 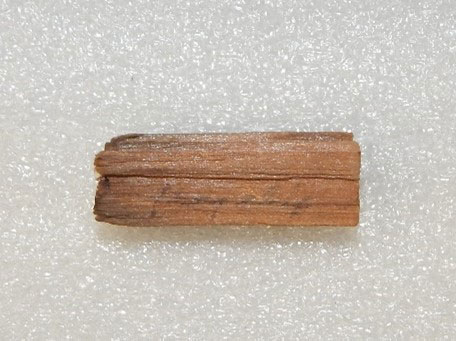 Splinter of wood from the Spanish ship Reina Cristina. SHSND 4434

Even knowing the history behind these “fragments of history,” one must wonder if it is the meaning that we imbibe into the artifact that is more important than the object itself.

These seemingly inconsequential “fragments of history” are related to an interesting time in our history. But are they meaningful artifacts on their own? The rust scales and splinter of wood came into our collection when most people still did remember the Maine, and it was a much different time in our collecting strategy. With the uncertain provenance of the wood and the fragmentary nature of the rust scales, it is unlikely that we would accept either if they were offered to us today. While we don’t have a full history of who was the original recipient of the plaque, it tells a complete story by itself, and we would probably accept it now if it were offered. While searches for records of which serial number went where have proven to be in vain, we can only hope that one day we will find that elusive piece of the puzzle. So yes, fragments of historic objects can help us understand the times and people who used and built them by showing us what others thought were important artifacts of history. I have to think: What items have we collected in the past 20 years that will cause people a hundred years in the future to scratch their heads and wonder why we accepted them into the collection?