In the Archaeology and Historic Preservation (A&HP) Division at the State Historical Society we help protect and study old and historic buildings in North Dakota. One of my favorite pastimes is to closely observe details of old structures and share what I’ve learned about them. The connections -the way old buildings are put together- are extremely important details of a building. If a building gets to be old and historic, it is only because the builder had a firm grasp of putting it together so that it would last. Here are some observations on treenails, wrought iron fasteners and rafter connections. Have you observed any structural connections that you thought were interesting?

Treenails, wrought iron fasteners, and rafters joined directly together at the ridge are three now- rare historic structural connections in North Dakota. Treenails are hardwood pins that look like, well, nails made out of trees. They are hammered into holes to secure wooden joints in barns and other buildings made with heavy timbers. The specific wrought iron fastener in today’s blog is the wrought iron loop used to connect a hanger assembly on the deck of the Viking Bridge (Traill County) to the bridge truss. The metal loop eye bar and cables were the only wrought iron used in the bridge, with the rest of the structure being manufactured of steel in Minnesota. The third rare historic connection consists of rafters joined together without the use of a ridge board at the top of a roof. The ridge board was generally adopted around 1900, presumably because nailing the rafters to a board was much faster than the alternative of crafting mortise and tenons for each pair of rafters.

Treenails were and are used in timber frame construction to connect heavy wooden posts and beams together. Also called trenails or trunnels, they are long hardwood pins that secure a joint tightly. 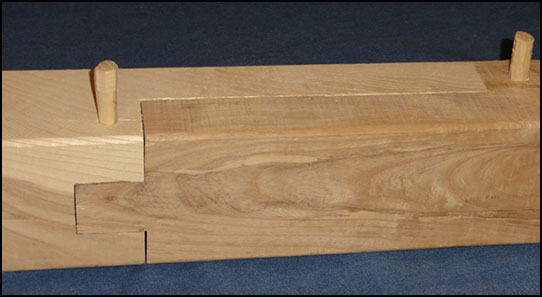 Treenails hammered in and cut off flush as typically found in timber frame structural members.

A blacksmith welded the top wrought iron loop found on the side of the Viking Bridge north of Portland in Traill County. He used wrought iron, which was superior to steel for welding purposes.[1] Viking Bridge was completed in 1885 at a time when metal bridges were quickly becoming popular with county road commissioners. The metal truss bridges were manufactured in other states and shipped to the closest railroad depot. Average local handymen under the supervision of a bridge engineer could quickly construct a metal truss bridge wherever one was most needed. The only construction specialist other than the bridge engineer was the blacksmith, who forged the wrought iron loops on the cable connections that fastened the truss to the bridge deck.

ND DOT completed the restoration of this oldest documented motor vehicle bridge in North Dakota in 2011.

Rafters joined directly together at the ridge, (no ridge board)

The details of a structure’s construction help us date the building and understand the evolution of building construction. Treenails are probably the least reliable of the three connections for dating purposes, because timber framers still use them today, but the wrought iron connection on the bridge was only favored for about 20 – 30 years and was rare after 1900. Tongue and groove rafters also fell off sharply after 1900, as the ridge board caught on very quickly.

No ridge board here, rafters secured directly together in this school house built in 1894.

Left: An example of a mortise and tenon joint used to connect rafters at the apex. Ridge boards replaced this construction technique about 1900.
Right: Today, if building a stick-built structure, a carpenter would probably choose to use a ridge board to connect rafters. The ridge board supplies additional rigidity and strength to the roof structure, and avoids many hours of crafting multiple mortise and tenon joints. Photo from Griffith Home Analysis’ See example.com http://seeexample.com/index.htm?http&&&seeexample.com/proper_ridge_board_depth.htm

If you have noticed any similar intriguing historic structural connections in your neighborhood buildings, you can share your photos and comments on our Facebook page: https://www.facebook.com/northdakotahistory