It was a morning of total frustration. I couldn’t read the caption beneath the photo in a seventh-grade geography book.

In hindsight, the reason is clear. I was six years old, a first grader at Hiddenwood School #2, and l hadn't yet learned to read. The photograph I was puzzling over was of South Dakota’s Mount Rushmore. The “big kids” were reading the geography text; I was stuck with Fun with Dick and Jane. 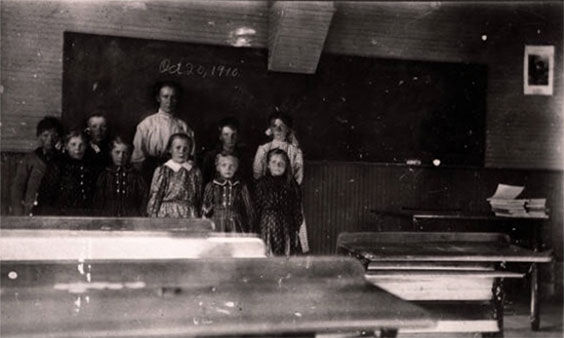 I was reminded of this experience during a recent visit to the Inspiration Gallery: Yesterday and Today in the North Dakota Heritage Center & State Museum. Next to the Nancy Hendrickson house is a photograph of a teacher and her nine students in a one-room country school. A date on the blackboard reads “October 20, 1910.”

One-room country schools were still prevalent in North Dakota in the mid-1950s. It is estimated 3,795 of these school buildings existed in 1955; 2,355 of those were actually in session.1 I attended the one-room Hiddenwood School #2. Hiddenwood #1 was three miles north; #3 was three miles south.

Even though I attended a one-room school decades later, my memories of Hiddenwood #2 are exactly as pictured in the 1910 photograph: the chalkboard (ours was green); the wooden desks; the stern, no-nonsense teacher; the self-conscious students; and the stack of books.

Even the number of students is the same: two of us in first grade, two in seventh grade, and one each in the grades between. The ratio of boys to girls was different, though; we only had one girl, Sylvia, who was in fifth grade. The rest were boys from farms as far as 2.5 miles away. 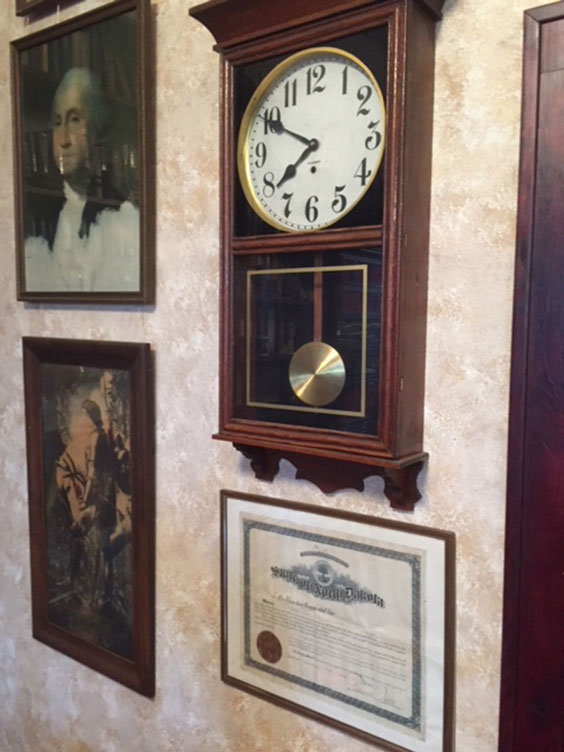 Nine wooden desks faced the front of the room. On the wall over the chalkboard was the wooden Regulator clock that our teacher wound every morning. On either side of the clock were two pictures: Gilbert Stuart’s George Washington on the right, George Frederick Watts’ Sir Galahad on the left. The meaning of the Stuart picture was evident. We weren’t so sure about the Sir Galahad picture.

Recent research in the State Archives revealed the reason for Sir Galahad’s placement next to the clock:

In any event the teacher should decree that nothing but beautiful things shall be hung upon the walls. Better bare walls than debased or debasing art; better nothing in the way of decoration than decoration which is worse than nothing. The following list may prove useful to the country teacher who wishes to be able to name one desirable work of art…2

As I wrote in my last blog post, I grew up in a slower, simpler time. I described my boyhood as one that could have taken place in the mythical community of Andy Griffith’s Mayberry. This simple country school was a big part of the mystique, and there was no “debasing” art in it.

I remember the smell of the green sweeping compound scattered and then swept up before leaving for the weekend, the long walk to school every day (460 feet, door to door), and the house flies we imprisoned in the ink wells on our desks.

My most vivid memory is of the McLean County bookmobile that stopped at our school once a month. We were each limited to borrowing 10 books per visit. We had read and reread the books in our country school library, many of them missing covers and pages. The traveling bookmobile opened up a world that satisfied my curiosity about Mount Rushmore and introduced me to many other wonders. 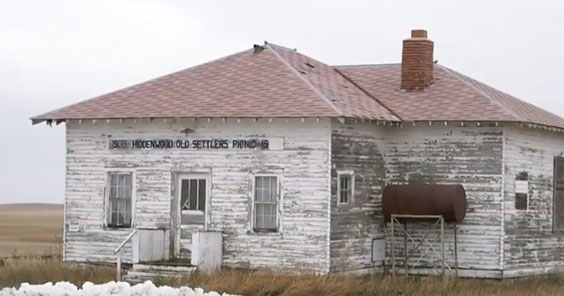 I was frustrated to read the 2014 news story of the burning of the old schoolhouse. The building was beyond repair and was becoming an eyesore. I was content, though, to be able to read the story of its end, an ability I owe to my five formative years at Hiddenwood #2. While we can’t go back in time, I’m delighted to be able to use the State Archives to research information, find photos, and learn more about my childhood school.