Every historic site has its own unique story. It may be colorful. It may be weighty. It may even cover events of a controversial nature. If a site falls into this last category, how best do you present and interpret its history?

The history of Fort Totten deals with the interactions and conflicts between two different cultures, the Dakota and American. The interpretation we present to site visitors has changed and expanded over the last fifty years. When first opened to the public in 1960, our interpretation focused on the site being a well-preserved frontier military outpost. The fort was built to protect early Euro-American settlers of the Devils Lake Basin area, as well as Dakota tribes who had been convinced by the US Government to settle nearby. The fort’s role as a boarding and industrial school for hundreds of Dakota and Chippewa children for more than sixty years (three times the length of its life as a military post) was not integrated much at all in the interpretation, except in passing. 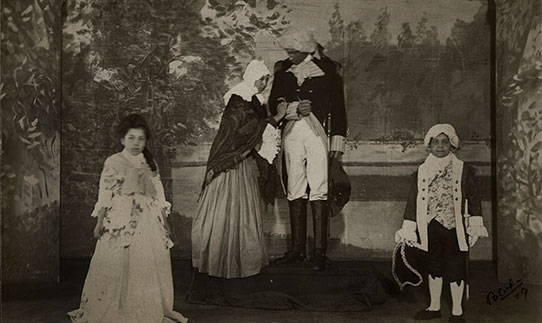 Children participate in a reenactment of a scene from the American Revolutionary War era, ca. 1908. (SHSND 0210-006)

Fast-forward fifty-five years and our interpretation of the site’s history now incorporates the military story, the school story, and the site’s role as a preventorium (a four-year program to teach about preventing the spread of tuberculosis). We also discuss the ways previous site staff have interpreted Fort Totten since we became a part of the State Historical Society of North Dakota in 1960. To help visitors connect to the often painful and difficult experiences of Dakota children when they first arrived at the industrial and boarding school, we utilize oral histories of former students. These histories indicate that for most of its existence, the school meted out harsh discipline and focused on teaching students how to do manual labor. This was believed to help native students leave school as good citizens, farmers, and homemakers. Strict rules of discipline assisted the teachers in ensuring the students would cease to use their native language, learn to speak English, and fully embrace American culture. The goal was to remove all prior connection to their Dakota past.

The exhibits we have designed and installed in several of our buildings put the visitor in the shoes of one of four composite characters of real people who lived, worked, or were stationed here. We present the history with this first-hand interaction and strategic use of the voices of former students and soldiers to ensure that when visitors leave Fort Totten they come away with a better understanding of this site’s unique history. More importantly, we hope we have interpreted the layered and nuanced history of the site in such a way that the visitor becomes an advocate for the site - to tell others of this significant place and bring new visitors here to learn about the complex history of Fort Totten; military fort and boarding school.