Documentation and housing are integral to museum collections work, and they make up a large part of my project as an intern at the State Historical Society of North Dakota. Last year during a storm, the roof was damaged at one of the State Museum’s offsite collections storage facilities, known as Storage East. During the recovery activities, the collections team noted that most of the objects in the facility had poor documentation, lacked current photographs, and were in need of cleaning and rehousing. That’s where I come in.

My job is to update the information we have about objects housed at Storage East. Most of the objects stored there are furniture: bookcases, desks, chairs, trunks, and the like. Big stuff. Stuff that’s mostly made of wood, glass, and metal, and used to furnish exhibits and tell stories. But the records we have for them are outdated or incomplete. For example, we have a large collection of trunks, and for a few of them their documentation has the word “trunk” with no further description. This sparse documentation doesn’t do us much good if we’re trying to find a specific trunk and have no idea what it looks like. My task is to write a more thorough description of the objects’ materials, color, dimensions, and style. 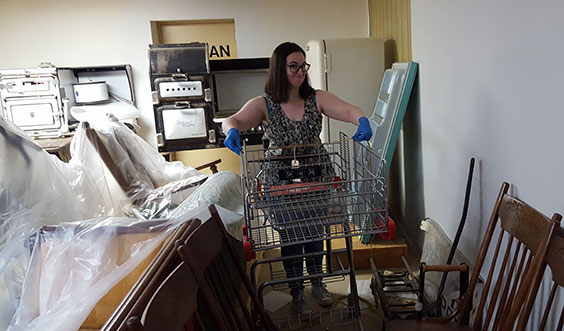 Measuring the dimensions of a shopping cart at Storage East.

I also need to conduct a thorough analysis of each object’s condition. Does it have any cracks? Any peeling varnish? Is the color faded? Or maybe the object is in great condition, almost as flawless as the day it was made. It’s my job to update this information, so we can track any future changes to the object, whether through another disaster or general deterioration. 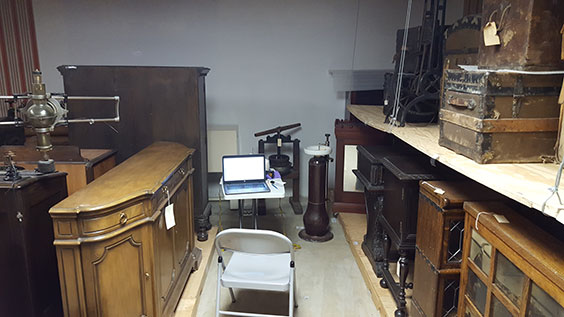 When the object has been described, photographed, and labeled, it is easier to track as it moves from storage to exhibit, or even from storage room to storage room. For example, while working my way through one of the rooms, I found a lampshade. The shade had no object number, and there were no shadeless lamps in that room. I made a note of it, and a few rooms later, I found a lamp without a shade. By checking the photo in the lamp’s file, I was able to verify that the shade belonged to it, and reunite them. Without the previous documentation of the lamp, the objects would have stayed separate, making it difficult to use the lamp for exhibits or research. 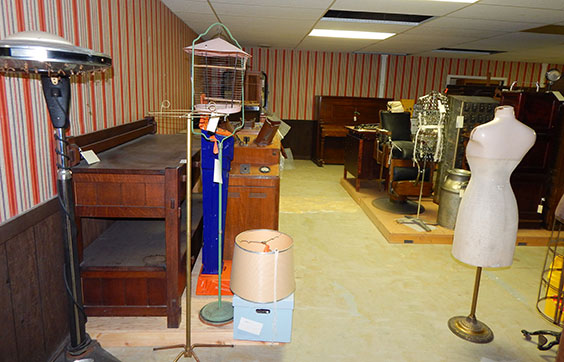 The separated lampshade is on the blue box, marked with orange flagging tape as a disassociated object. 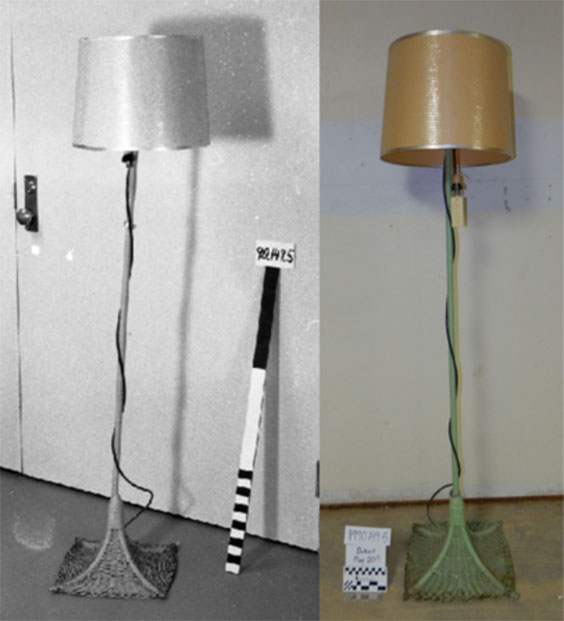 When I’m not describing the collections, I’m finding new ways to house them. Most of the objects have been stored on wood pallets, which is a good start. Museum objects should not sit directly on the floor, in case of flooding and to avoid any damage. Yet objects need additional protection from roof leaks and potential falling debris. Part of my project has been to research shelving options for the storage facility. I am using floor plans to measure how many shelving units we can fit into each room, using as much of our space as possible.

The progress on this project has been slow but significant. I’m always delighted when I locate a missing object or reunite pieces, and it’s a great feeling to do everything I can to make sure they will not be lost again. There’s a lot to do, but the project will help future collections staff, whether it’s through documentation, preparing for shelving, or dusting the objects. It all helps preserve these objects for the future.