The Audience Engagement & Museum staff is currently working in partnership with the North Dakota Council on the Arts (NDCA) to develop On the Edge of the Wind: Sacred Land, Mythic Tales, a 2023 exhibition to follow Fashion & Function: North Dakota Style in the Governors Gallery at the ND Heritage Center & State Museum. On the Edge of the Wind is a rare opportunity to gain understanding of sacred sites and oral traditions associated with tribal cultures in both North Dakota and South Dakota. 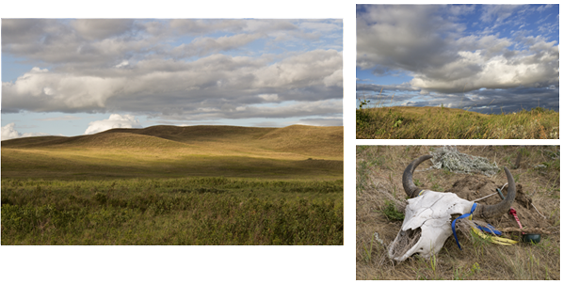 One site featured in the exhibition is Buffalo Lodge. In the early 19th century, it was the site of the largest Sun Dance in North America with more than 1,500 celebrants. Photographs by Barbara Hauser and Troyd Geist

The Navajo and Hopi tribes of the American Southwest celebrate the concept of “walking in beauty.” This same concept manifests itself among the tribes of the northern Plains in the idea that life is a ceremony, and one should seek balance through the integration of connectiveness and awareness. The concept of life as a ceremony is repeated throughout the stories explored in On the Edge of the Wind.

To recognize and honor the importance of the various sites, the exhibit focuses on traditional stories that establish the significance of place, rather than pinpointing actual sites. The narratives shared are told by respected storytellers who have been granted the right to tell the stories. Every effort is being made to respect both the cultures and the sanctity of the sites detailed. Stories were shared with appropriate permissions and in accordance with tribal guidelines.

An important organizing principle of the exhibition is the idea that there are no definitive stories in the oral tradition. Variations reveal themselves, and the same story may be told differently from family to family and from community to community. This exhibition captures each individual storyteller’s version of a particular tale.

On the Edge of the Wind has seven major thematic sections. Key to the exhibition are 118 large-format color photographs printed on aluminum. The photographs are primarily landscapes. Groupings of the photographs define the individual interpretive segments. Each section is also accompanied by objects supporting the narrative. Some of the objects were newly commissioned by NDCA for the exhibition. Several are from the collections of the State Historical Society of North Dakota. 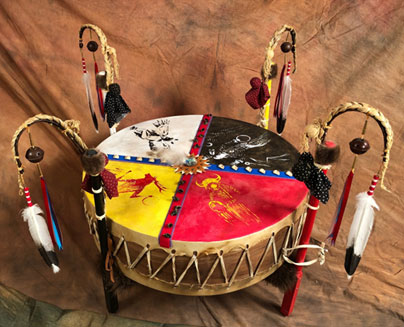 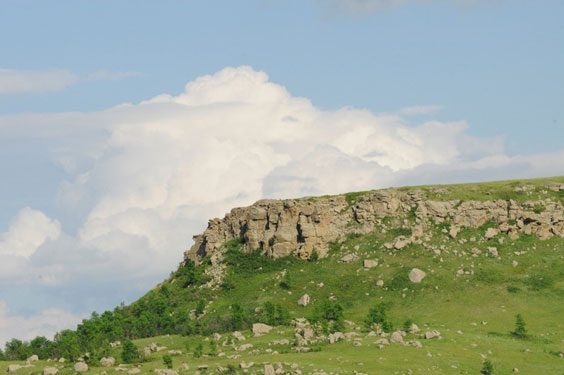 Thunder Butte is the site of a traditional story in which the hunter Packs Antelope fights a heroic battle on behalf of the thunderbirds. Photo by Barbara Hauser

Components of the exhibition have been in development since early 2019. North Dakota’s state folklorist Troyd Geist spent months in the field working with tribal elders and storytellers collecting their traditional stories along with background information and invaluable interpretive content.

Geist captured the recorded sessions in more than five hours of narrative videos. His intent is to share select stories with our museum audience but even more importantly to document the narratives of contemporary elders for future generations. They form a valuable archive. When the exhibition is complete, Geist intends for the NDCA to gift the recordings to the associated tribal communities.

The video recordings will be accessed at five touch screen kiosks located throughout the gallery and on the State Museum’s website after the exhibition opens. 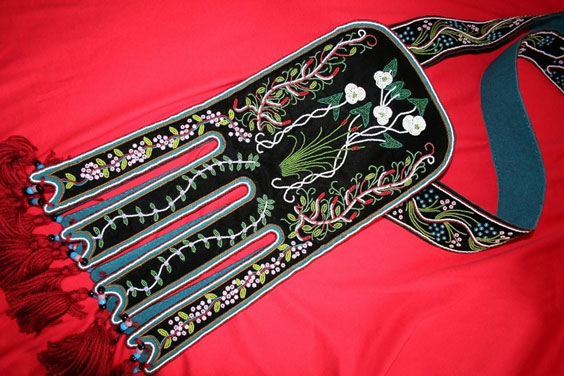 Beaded Ojibwe “octopus bag” crafted by Marvin Baldeagle Youngman. Despite its name, the shape of the bag represents a bison with four legs, the notched ends mimicking hooves. The bag is intended for carrying medicinal herbs and plants. Courtesy NDCA

Fashion & Function closes the Sunday following Thanksgiving 2022. After its deinstallation, we will begin installing On the Edge of the Wind. The new exhibit is scheduled to open in mid-March 2023 and run through November 2024.