Recently, a fellow blogger touched upon the important role that partnerships play within the SHSND mission to “identify, preserve, interpret and promote the heritage of North Dakota and its people” (see http://blog.statemuseum.nd.gov/blog/partnering-people-oh-possibilities). The SHSND is indeed fortunate to have many partners in this mission. I’d like to further elaborate on the benefits of our partnerships in support of heritage tourism, educational outreach and archaeological research via a couple recent examples from the Knife River region. 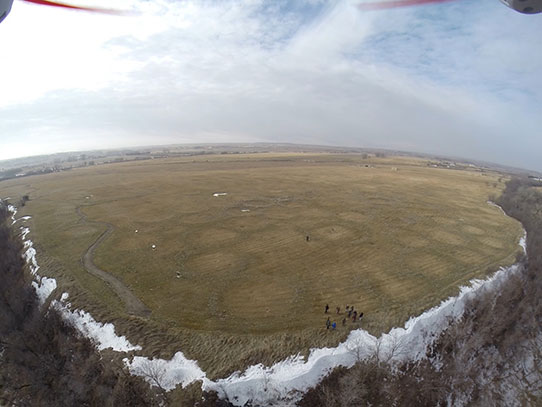 The Heritage Outbound program is a heritage tourism and educational program I’ve been fortunate to be involved with now for several years. The program engages participants in a day-long educational experience focused on the history and culture of the Mandan, Hidatsa and Arikara peoples at Fort Clark State Historic Site and Knife River Indian Villages National Historic Site. 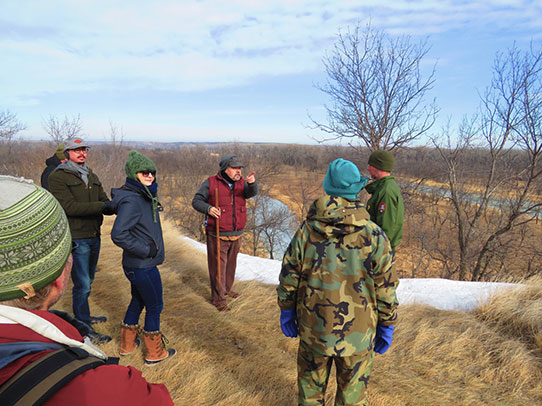 This program is a long-time favorite of mine. You just can’t beat spending a winter day talking about the archaeology, history, and natural history of the Knife River area with a group of people eager and excited to learn! This year’s program was held on February 20, and we had a great group of participants. The day included site visits and outdoor hikes at Fort Clark State Historic Site and Big Hidatsa Village within the Knife River Indian Villages National Historic Site. Both of these earthlodge village sites are wonderfully preserved and simply beautiful to visit. 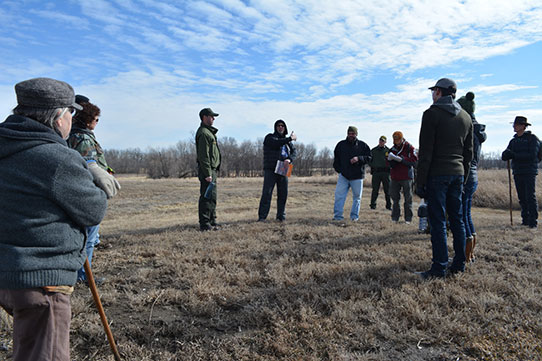 One of the highlights of the Heritage Outbound day is a fantastic traditional meal of roast bison, squash, corn, beans and fry bread, and a very special evening program of music and cultural exchange in the reconstructed earthlodge at Knife River. From the Mandan, Hidatsa, and Arikara Nation, we were fortunate to have Amy Mossett, Twyla Baker-Demaray, Allan Demaray, and the Demaray family with us this year for the sharing of oral history, traditional music, and song in the earthlodge. 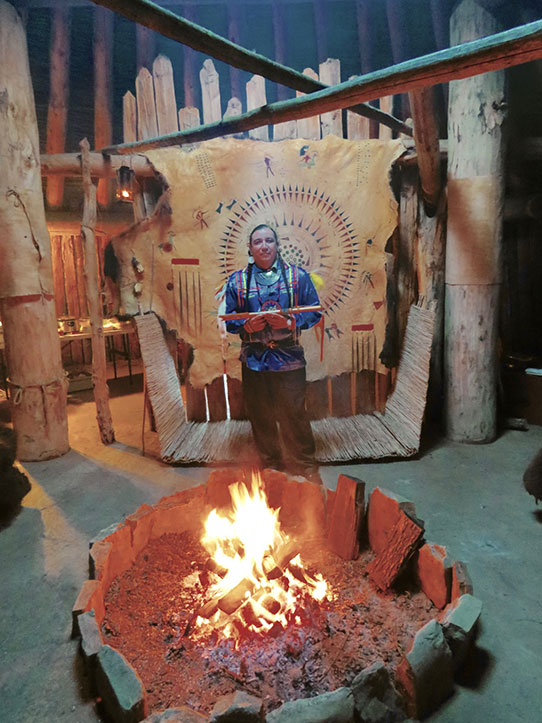 The SHSND partnered for this year’s event with the Knife River Indian Villages National Historic Site, the Knife River Indian Heritage Foundation, the Mandan, Hidatsa, and Arikara Nation, and the North Dakota Archaeological Association. The Heritage Outbound program is just one example of how partnering with people can bring about cultural exchange and a celebration of the diverse history of North Dakota.

I’m happy to announce that many of the groups involved with the Heritage Outbound program will also be partnering for an upcoming event in May 2016 called “ArcheoBlitz.” Major partners include the Knife River Indian Villages National Historic Site, the Midwest Archeological Center, the Nueta Hidatsa Sahnish College, the Mandan, Hidatsa, and Arikara Nation, the State Historical Society of North Dakota, the Northern Plains Heritage Foundation, the PaleoCultural Research Group, the North Dakota Geographic Alliance and researchers from across the nation. The ArcheoBlitz event will take place May 5-7 at the Knife River Indian Villages National Historic Site, and celebrates both the National Park Service centennial and the Hidatsa history preserved at the park. The first two days will give 7th and 8th grade students the opportunity to conduct supervised archaeological field research. The final day is open to the public and will include Native performing arts groups and research presentations, with other events planned throughout the day.

Further information on the ArcheoBlitz event can be found at http://www.nps.gov/knri/index.htm.