My phone rings, and it is a number I have never seen. Grabbing a notebook and pencil, I answer the call. The person on the other end of the line wants to discuss a small, remote state historic site that is missing a sign. Phone calls like this are a common occurrence. While I primarily manage staffed sites, there is nothing more rejuvenating than seeing people’s passion for their local state historic site.

Often when I get the chance to write a blog post for the agency, I tend to focus on our larger staffed sites, but we also manage numerous smaller properties that we regularly take care of, though do not have daily staff on site. Many of these are campsites relating to the punitive campaigns of Brig. Gen. Henry Sibley and Bvt. Brig. Gen. Alfred Sully, places where the army camped for a night or two before moving further west. While the punitive campaigns and their lingering wounds are an important North Dakota story, some of these campsites are not much more than a footnote in history. Some campsites are near local communities that have embraced them and assist with their care.

One of these is Lake Jessie State Historic Site near Binford in Griggs County. This spot marks campsites for several significant expeditions across northern Dakota Territory between 1839 and 1889. Located in the backyard of a family who has farmed the land for generations, the site is often overshadowed by the Ronald Reagan Minuteman Missile State Historic Site to the southeast. To access Lake Jessie, one must follow a designated path through the private property of the Helland family, who provides public access. Some people may hesitate to drive into the farmyard and through their hay corral to get there. But if you do, you will likely receive a friendly greeting from owner Lowell Helland

The Helland family developed a love of history from meeting with Dana Wright, a former State Historical Board member and chairman of the State Parks Committee. In 1953, Wright drove out to Rudy and Thelma Helland’s farmyard. He asked their permission to bring members of the Barnes County Historical Society to their farm as part of a tour on Sibley sites. The Hellands agreed and listened to Dana’s presentation that next Sunday.

Wright’s visit left a mark on the Hellands. Nearby sites came alive for Rudy, Thelma, their children, and Rudy’s brothers. Rudy’s brother Fritz would lead the creation of the Griggs County Historical Society and the Griggs County museum in response to a challenge from a local businessman who said he would donate a Case steam engine if these entities existed.

The Hellands are incredibly proud of the site, and their passion is noteworthy. Rudy and Thelma’s children (Arden, David, Lowell, and Karen) have continued to love and take care of the site. I have had the pleasure of meeting with them on several occasions to discuss how the site will be cared for in the future. It is clear that they have a love for history, the Lake Jessie State Historic Site, and Dana Wright. 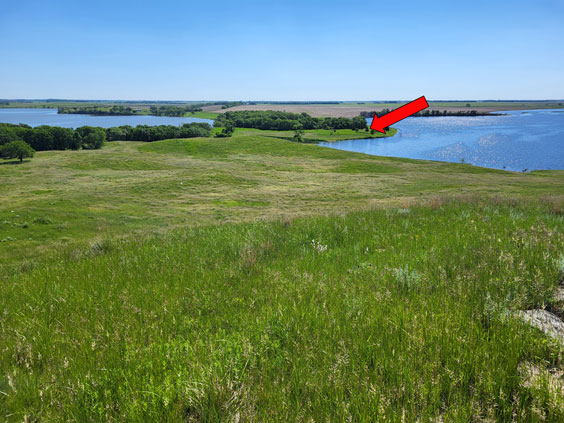 View of the isthmus between Lake Jessie and Lake Addie. Though barely visible in this photo, Lake Jessie State Historic Site is located on this thin strip of land with the red arrow pointing to its location. 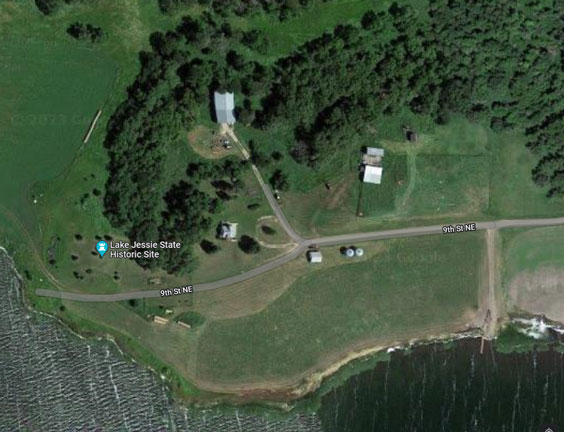 The Helland family has cared for the little state historic site in their backyard since its establishment in 1955. They even created a museum on the site out of an old rail car.

In the far southwest corner of the state sits Fort Dilts State Historic Site. This site marks the end of Capt. James Fisk’s failed wagon train to the gold fields of Montana. The site is recognized as the only documented place where a wagon train circled the wagons during an attack, but there is more to the story. Some accounts include the possibility that Fisk was using the wagon train as a cover for hauling a large load of whiskey to the gold fields for his private profit. The community of Bowman embraces this location as its historic site. It features within several of the exhibits at the Pioneer Trails Regional Museum in Bowman. For years, one local historian, Dean Pearson, has printed and posted his interpretive panels at the site to tell the story. His work helped inform our panels, which we hope to have up at the site this summer. 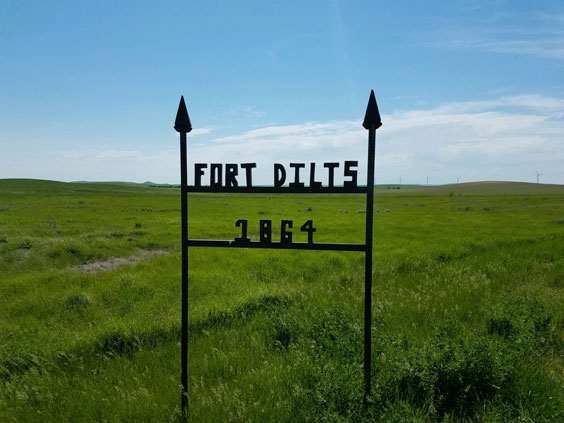 Fort Dilts State Historic Site near Rhame not only boasts an exciting story, but the local community often asks about opportunities to promote the site.

Local communities can also become protective of sites. In 1987, the county commissioners in Divide County tried to stop the Rough Riders Motorcycle Club from holding its annual bike rally at Writing Rock State Historic Site north of Grenora. The local community feared the bikers might cause damage to the site. In the end, the bikers were allowed to have their rally, but it did not diminish the community’s perceived sense of ownership. They continue to work with the State Historical Society to improve the site, including during our most recent project, which involved replacing old playground equipment. 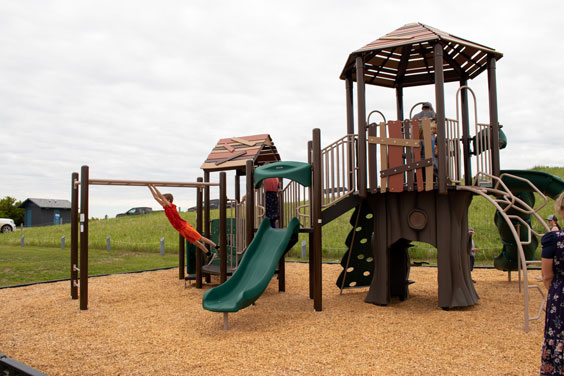 The new playground equipment at Writing Rock represented a partnership between Divide County and the State Historical Society of North Dakota. The June 2022 opening was well attended by the local community.

The passion communities have for their local state historic site is always encouraging. I get their passion. I feel the same way about all of the sites I manage. The worst part of my job is sometimes having to tell people that although the project they want is on our list, I can’t move theirs to the top. Our team of staff working primarily on state historic sites is pretty small. We have two historic site managers (including myself), one architecture project manager, a construction supervisor and his crew of four, 12 site supervisors and their teams, and seasonal staff. That is not a lot for nearly 60 sites. Luckily, we get a lot of help from other individuals around the agency. However, some of our biggest helpers are community volunteers and friends groups. If you are interested in assisting with your local state historic site, feel free to contact the State Historical Society, and we will let you know how you can help.