For more than 30 years I’ve used American Indian tipis as a tool to help students of all ages better appreciate the sophistication of the cultures that lived on the northern plains. 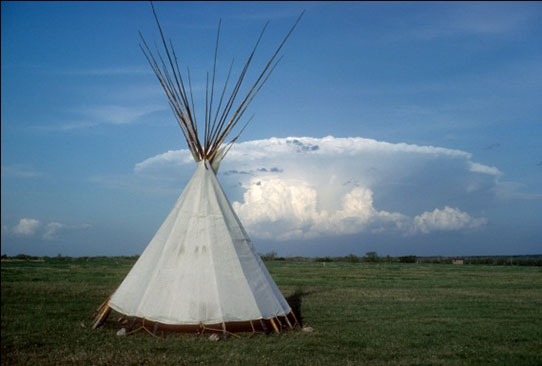 I have set up tipis in schoolyards, at Boy Scout camporees, on state and national historic sites, in public and private spaces, and in museums in Minnesota, Wisconsin, Virginia, and across North Dakota. 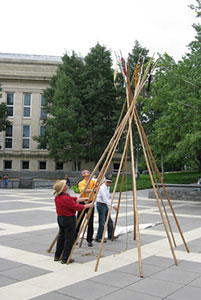 I’ve even helped staff understand the process of taking a buffalo hide tipi down as we de-installed the Main Gallery of the Heritage Center in 2013.

When I present a program about the building of a tipi, it usually is a hands-on learning experience. I carry on a conversation with the audience. I ask for their assistance with identifying poles, bringing them to me, and (with my direction) figuring out where to place them.

We tie the poles together, raise and fasten the cover, and then enter the tipi. There is always a sense of awe when one enters a tipi for the first time and raises one’s eyes to the sky.

The tipi is a dwelling created by stretching a cover of canvas or tanned bison hides over a framework of straight wooden poles. The poles are tied together in a specific pattern around a foundation made of three or four poles, depending upon tribal practices. The general form of the tipi is conical. Although the top of the cone of the tipi may be 16 or 18 feet off the ground, erecting it is a relatively easy process. 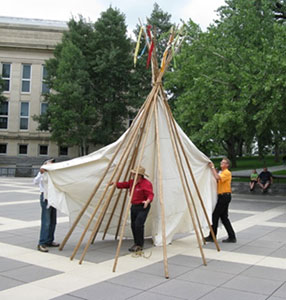 At the top there is an opening through which rising smoke from a small central fire can escape. Extensions in the cover on either side of this opening can be adjusted depending upon wind direction, creating a relatively pleasant environment inside the structure.

Doug Wurtz, a volunteer with the State Historical Society, has helped me several times as I’ve given tipi raising programs for students or the public. As Doug became more interested, he began to experiment with a 1-inch=1-foot scale model of a tipi. As Doug’s models got more sophisticated, he became interested in the physics and the aerodynamics of the tipi. This led Doug to create a kit called “Tipi in a Box” which has since developed into a prototype that could be used by a classroom teacher to offer learning to their students about the tipi. As Doug and I evaluated the “Tipi in a Box” project, we became aware that teachers would have difficulty using the kit without a narrative to direct them.

Doug and I began the process of developing the narrative by videotaping me describing the kit and its intended use. During that taping we realized that some of the detail, such as how the knots are tied, would be lost without additional video.

Although this project is still a work in progress, Doug and I have learned many lessons related to building a quality educational product. We look forward to continuing this and additional projects that can provide insights into the technologies and lifeways of native peoples.