The City of Robinson in Kidder County (about 30 minutes northeast of Steele), has a wonderful town hall that was constructed as a Works Progress Administration (WPA) project in 1935, the founding year of the WPA. I am writing a National Register of Historic Places nomination for this building. The WPA federal program had one mission – to put people back to work during a Depression that began in late 1929. 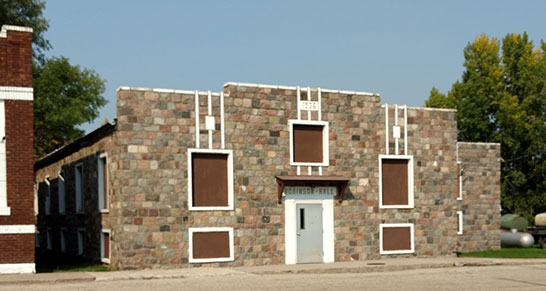 Even though they had just incorporated in 1929, the town leaders of Robinson were able to get a WPA construction project funded and completed quickly. This was because they had already had a special election in October 1934 and passed a $2000 bond to initiate construction of the town hall, which would also feature an auditorium. Constructing a multi-purpose town hall was common at the time. They discussed the design with a Bismarck architect Herman M. Leonard. He designed the building with a bowstring truss that allowed the auditorium portion to have a 40’ x 90’ clear span. This wide open space with beautiful maple flooring was much appreciated in the ensuing decades, as it allowed events to flow smoothly. Basketball games could proceed with high throws and predictable passing. In the 1930s, schools often had auditoriums in the basements with low ceilings, water-damaged, uneven wood flooring, and large pillars. Oftentimes they were simply too small to allow full court movement. Large weddings and other celebrations occurred inside as well. 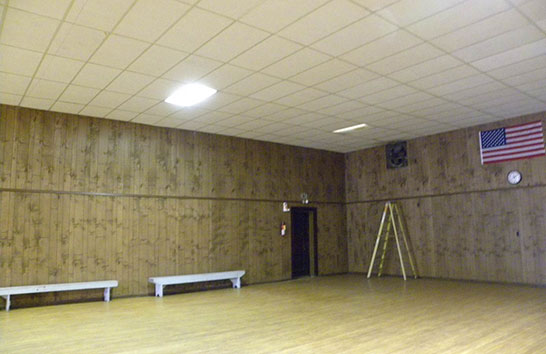 More than 600 people attended the dedication ceremony on September 11, 1937. During the course of my research, this event presented a little mystery. Movies were held in the auditorium that day, yet records from the Northern Plains Electric Cooperative show that electricity didn’t arrive until 1942. So I thought there must have been an alternative power source. Further research uncovered a gas-powered contraption in a museum in Georgia that could project movies at the time and didn’t need electricity, so that seemed plausible. However, the current mayor of Robinson, Bill Bender found old newspaper articles stating that a man by the name of Ole Saltness came to Robinson in 1929 and owned a Philco generator, which produced enough power to provide electricity to a few neighbors, businesses, and the Robinson Hall. At that time, the load probably would have been little more than one or two low-wattage light bulbs per building. Instead of choking on gas fumes, the movie audience would cry “Ole, Ole!” if a fuse blew. Robinson Hall provides a glimpse into the quirks of small-town life in North Dakota during the New Deal era.