Oops! We have found a few errors in North Dakota: People Living on the Land (ndstudies.gov/gr8) since it was published in October 2014. However, because it is an online curriculum, we can make changes quickly. Though there are good reasons to provide students with paper textbooks (there is nothing like the feel of a book in your hands), one of the great advantages of a web-based curriculum is the ease of correcting errors (typographical or factual) that nearly every textbook contains.

During our first introduction of this 8th grade curriculum to teachers, one of the participants noted that a sentence about the U.S. Constitution stated that it was written in 1889 (instead of 1789, as we all know). Well, that was embarrassing. After teaching U.S. History for 17 years, I should have seen that typo immediately. However, the error was quickly and easily corrected.

One day while thinking about nothing of importance, it struck me that in writing the introduction to the role of North Dakotans in World War II, I had failed to mention the outcome of the war. Adults of my age generally know that the Allies defeated Germany, Italy, and Japan in 1945. For eighth graders, that event is far in the distant past and the conclusion of the war needed to be clarified. And, it was – just one day later.

Differences of opinion are harder to resolve. Take for instance the photo of the Bakken oil region at night that was published by NASA a few years ago. The photo illustrated a section about how oil development had changed western North Dakota. (You can find the photo in Unit IV, Lesson 1, Topic 5, Section 3, Image 18.) 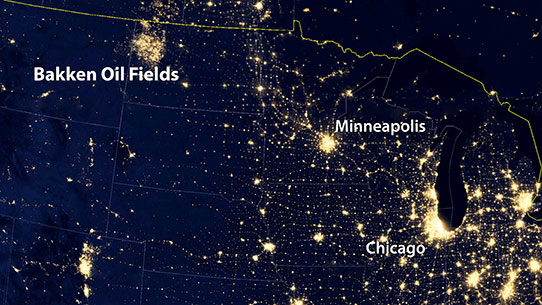 This NASA satellite photograph has state lines superimposed. The bright lights in the Bakken are caused by gas flares, drilling rig lights, and other night-time activity.

In the photo, the lights of the Bakken make it appear to be a city as large as Chicago. Recently, the Energy and Environmental Research Center at the University of North Dakota published a similar satellite image, but the lights (whether from flares, drilling rigs, or other activity) appear individually and do not make the Bakken look like a great new urban center. 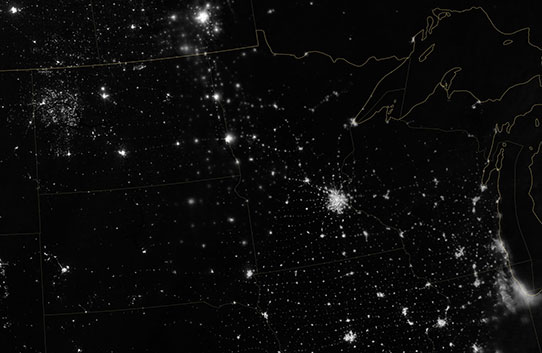 This satellite photograph of North Dakota shows the lights of the Bakken on the left side and the lights of Chicago in the lower right side. Minneapolis-St. Paul is the bright area just right of center. This photo was provided by the University of North Dakota-EERC. Technicians at the EERC adjusted the photo for atmospheric conditions that caused the Bakken lights to glare in the NASA photo. Photo courtesy EERC.

The problem is that NASA is a darn good resource and that image has strength. Nevertheless, driving through the Bakken at night is not like driving through Chicago. How to present the concept of major changes in western North Dakota without distortion? By presenting the problem to students.

If we publish both images along with some material about how the photos conflict, students can discuss whether to trust or to challenge resources. Through guided discussions with their teachers they can learn an important life skill of analyzing information before they decide to accept or reject what they read or hear. Part of what we learn in school is about “stuff.” The other part is about how to become a learning person. North Dakota: People Living on the Land is part of both processes.