As discussed in my last blog, What in the World is an Electronic Records Archivist?, management of digital records and their preservation is an extremely important and pressing issue in the world of archives. Archivists have been preserving paper and other resources for hundreds of years. Now records continue to shift to digital formats, and the shift is happening fast! This shift can be seen in the types of files in the different governors’ records.

From the territorial days and through the end of Governor Allen I. Olson’s time in office (1981-1984), all records were paper. We saw digital records begin with Governor George Sinner’s time in office (1985-1992), although it was actually only just a few floppy disks. The increase of digital files continues to be seen through the records of governors Ed Schafer (1992-2000), John Hoeven (2000-2010), and Jack Dalrymple (2010-2016).  As digital files increase, paper files decrease. Just 40 years ago, when Governor Art Link’s (1973-1981) records were transferred from his office to the State Archives, we received 334 cubic feet of paper records. Last year, when we received Governor Jack Dalrymple’s records, we only received 58 cubic feet of paper; however, we received thousands of digital files! With this trend, we might have more empty shelf space in our storage areas, but our digital shelf space will continue to fill and grow rapidly.

Researchers are able to visit the Orin G. Libby Reading Room at the North Dakota Heritage Center & State Museum to study the paper records, and in the future, online access will available for an increasing number of digital files.

These records are great for researching the state’s leaders and government happenings, but they also provide an interesting history of various technologies used throughout Dakota Territory and North Dakota.  The following images illustrate this well:

This first image is a Thanksgiving proclamation by Newton Edmonds, second governor of Dakota Territory, written in a beautiful, swooping handwriting. 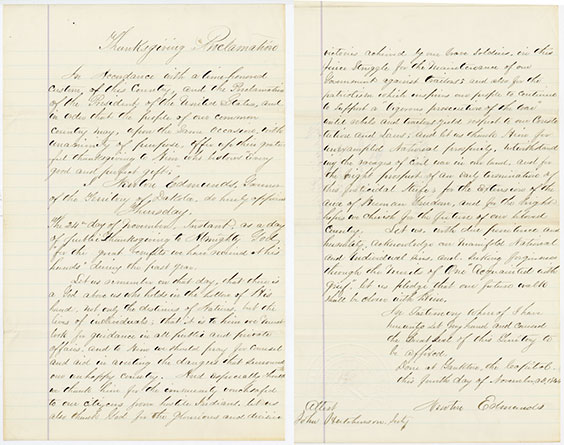 The second image is a Thanksgiving proclamation made by Governor Jack Dalrymple in 2013. This proclamation was created digitally, printed, signed by the Governor and Secretary of State, scanned, and then transferred to the North Dakota State Archives. 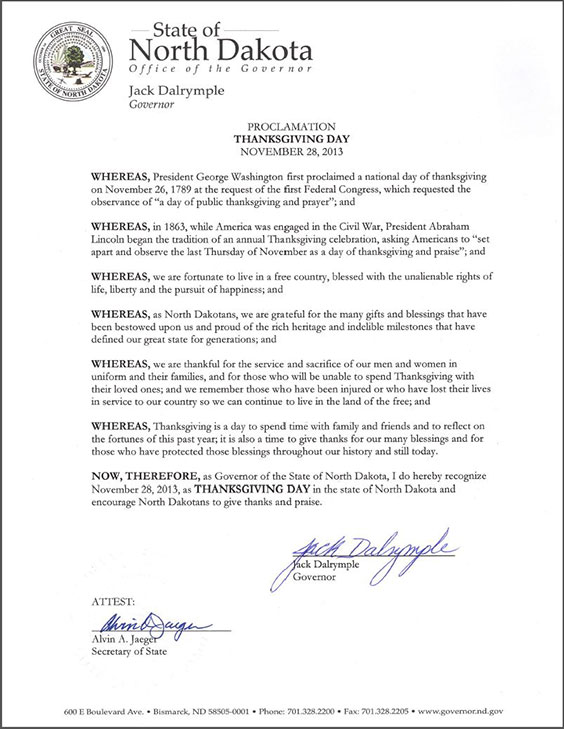 My, how times have changed! Although I love looking at the beautiful handwriting, I can’t imagine living without a computer to type documents! It will be interesting to see how technology continues to change and what steps archivists will take to ensure the records are available for future generations.