In June and July 2017, instructor Anna Andrzejewski of the University of Wisconsin-Madison held a four week, three-credit class in vernacular architecture, with a week in North Dakota’s Stark and Hettinger Counties, recording farmstead layout and buildings. (Vernacular architecture embodies the common building methods, materials, and decorative techniques used in a particular region during a specific period.) While in western North Dakota, students interviewed farmstead owners and photographed, drew, and made notes on the architectural features of the various buildings in their study. As review and compliance coordinator for the State Historic Preservation Office, I helped define the parameters of the field school. 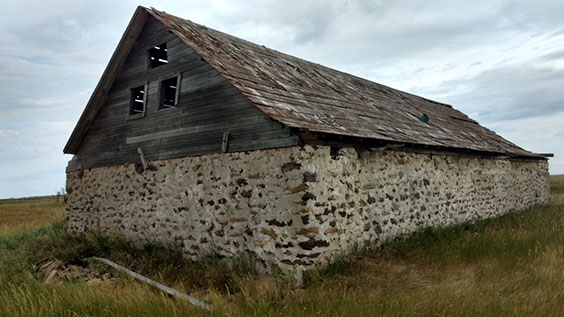 Old stone barn under study as part of the Farmsteads on the Frontier: German-Russian Immigrants in Western North Dakota field school, June 2017, photo by Susan Quinnell 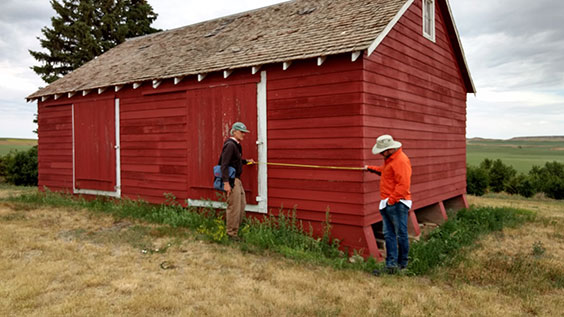 Small granary being measured as part of the Farmsteads on the Frontier: German-Russian Immigrants in Western North Dakota field school, June 2017, photo by Susan Quinnell 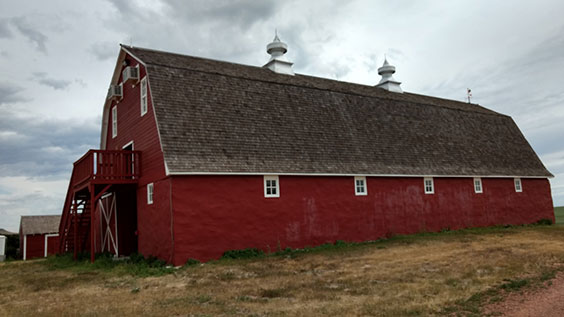 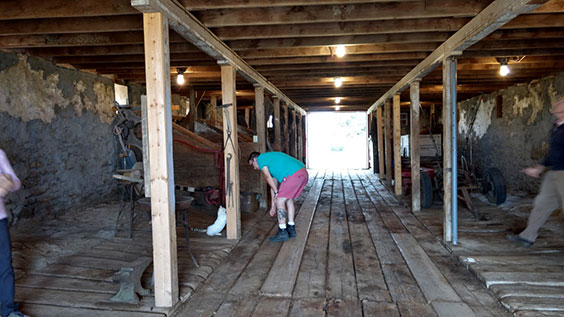 After recognizing the stone barns and farmhouses in this sub-area of Stark and Hettinger Counties as examples of American Western architecture, the second notable feature to the field school group was the date of settlement. The students asked the land owners when their farms were settled. The answer from everyone was 1910. Not 1909 or 1911, but 1910. And despite this specific date, the buildings we surveyed included traditional small stone barns, the most up-to-date dairy barns of the time, and plain residential homes. Normally one would expect to find that the small stone barns were built by the first generation, the dairy barns by the next, and a small home first followed by a larger and more stylish house later. Yet here all of these types sprang up the same year, depending on the cash resources available to the owners, and perhaps the size of the family. I hope the follow-up research is able to explain why there were both traditional and modern buildings built at the same time. I think this is an important juncture in the history of settlement that occurred after a specific point in time— is perhaps after the railroads passed through the area, making standard building materials more affordable.

The third impression Tom Carter had of the settlements he studied here was how clean they were. Many of the farms and ranches he studied further west, being more isolated and generally poorer, had a more difficult time taking away the trash. He found lots of historic trash where ever he went, but here trash piles were fewer.

The students are home now, where they will complete two more components of the field school. The first is a presentation by Anna Andrzejewski, who hopes to return to North Dakota and present her findings. The second is the development of an e-book by the students which should be completed this fall.