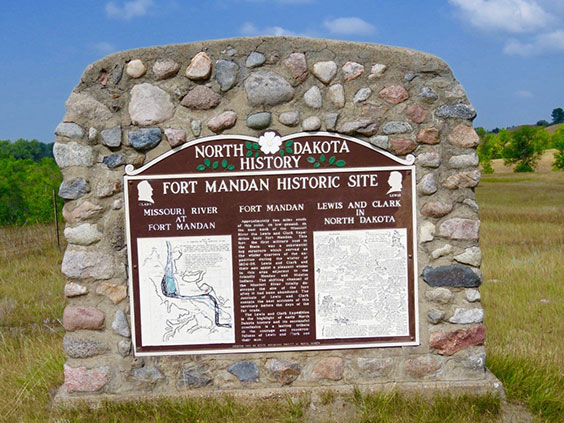 While investigating archaeological sites and collections managed by the Archaeology & Historic Preservation Division, a question will inevitably arise that requires a trip to the State Archives for more research. For the last three years, I have been researching the little-known story of the “Galvanized Yankees” (1st United States Volunteer Infantry, aka 1st USVI) at Fort Rice, Dakota Territory. Another story I have spent quite a lot of time researching is the 1804–1806 Lewis and Clark Expedition, the “Corps of Discovery.” Only recently, while I was putting some notes together about the Galvanized Yankees, did I notice the similarity between the two stories.

Both are about the westward expeditions of men whose homes were in the eastern United States, far from Dakota Territory. Men from Virginia, Kentucky, North Carolina, and other states would play key roles in both journeys.

Upon arriving in what is now North Dakota, the Corps would spend the winter of 1804–1805 at Fort Mandan, 60 miles (as the crow flies) northwest of the fort the Galvanized Yankees would occupy 60 years later at Fort Rice in 1864–1865.

Both expeditions traveled up the Missouri River to reach their first winter’s destination.
The Corps left St. Louis and traveled by keelboat, by pirogue, and by foot to Fort Mandan.
The 1st USVI traveled by train to St. Louis and then by steamboat and on foot to their winter home at Fort Rice. Both expeditions were under the orders of a U.S. president; the Corps under orders from President Thomas Jefferson, the 1st USVI from President Abraham Lincoln.
They both spent their first winters in crude accommodations built from cottonwood logs cut nearby.

Each expedition included one woman. Sakakawea, a Lemhi Shoshone living with the Hidatsas, accompanied the Corps of Discovery to the West Coast. Elizabeth Cardwell, the wife of Private Patrick Cardwell of the 1st USVI, accompanied her husband to Dakota Territory. Both women had babies who became a prominent character in each story. Sakakawea’s son, “Pomp” (Jean Baptiste Charbonneau), was born just prior to the expedition and traveled to the West Coast and back with his mother. Cardwell’s baby, a daughter, was born at Fort Rice and died seven days after her birth. Cardwell had been pregnant with the baby on the last 250-mile march to Fort Rice.

Both expeditions included at least one well-known encounter with Native Americans. Meriweather Lewis, co-commander of the Corps, killed a Blackfoot warrior in a skirmish in the Marias River country of present-day Montana on July 26, 1806. If not for the superior firepower of Lewis and his men, they could have been killed by the Blackfoot warriors, and the story of the Lewis and Clark Expedition would have ended much differently. The 1st USVI was attacked on July 28, 1865, at Fort Rice by Native American warriors under Hunkpapa Lakota leaders Sitting Bull and Gall. If not for superior firepower on the part of the military, the fort could have been overrun and destroyed that day, changing the story of the Galvanized Yankees and military forts on the Upper Missouri River. 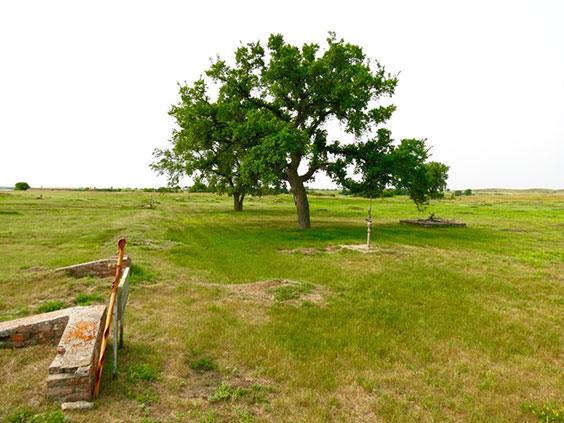 A portion of the parade ground (right) and corner markers of the post adjutant’s office at the Fort Rice State Historic Site, 27 miles south of Mandan, ND. The winter barracks of the 1st United States Volunteer Infantry would have been located behind the two trees at the center of the photograph. (Photo by Doug Wurtz, 2017)

The mission of each expedition also had some parallels. The Lewis and Clark Expedition was instructed to explore unknown territory, establish trade with Native Americans groups, affirm the sovereignty of the United States in the region, and find a waterway to the Pacific Ocean. The mission of the 1st USVI was to explore unknown territory, establish safe trade routes for immigrants to the gold fields of Montana and Idaho, proclaim the sovereignty of the United States (to the Native Americans), and monitor the waterway of the Missouri River.

When I began to research these topics, I viewed them as entirely separate stories. But anyone who has worked with archival records knows that it often leads to unexpected discoveries and insights. My archival research showed that though the stories of the Corps of Discovery and the Galvanized Yankees were 60 years and 60 miles apart, history was, in many ways, repeating itself.