One day in the fall of 2018 when I was the site supervisor of Chateau de Morès State Historic Site, my staff and I hosted a bus tour. It was the off-season, and we were short-staffed. Two of my team were at the Chateau, which left the store manager and myself to cover the Interpretive Center. After we greeted the group and showed them the orientation video, they were free to explore the galleries or visit the gift shop. I was in the primary gallery interacting with several of the participants when one walked up to me and said in a sly voice, "You know, when you get older, your aim gets worse."

At first, I wondered what he was talking about, but then he quickly added, "You may need to have somebody clean up your bathroom." All other staff were occupied with their assigned tasks, which left me to wield a mop and clean the sullied restroom stall. While being a site supervisor can be a dream job for some—I know it was for me when I started–it does come with an unglamorous side.

State historic site supervisors have a challenging job. Site supervisors are jacks-of-all-trades, and their positions can be broken down into many roles. For their sites they are the chief administrator, the human resources department, head of maintenance, event coordinator, program creator, lead interpreter, store manager, social media coordinator, marketing department, and even custodian. Some sites have large staff who help with these roles, but at other sites you might see the site supervisor get off the mower to collect admission, sell a souvenir, and then lead a tour.

On top of that, people expect you to be an expert and to speak with authority, especially on all topics of history and preservation. During my initial three months as the Chateau’s site supervisor, I was asked my first question about the historic preservation of a structure on the National Register of Historic Places (not my strongest area of expertise when I started). On the other hand, sometimes people also assume that your historical knowledge includes every aspect and minute detail of your site. While being considered a content expert in the ranching and meatpacking industries during the “Great Dakota Boom” and in the sophisticated home management practices of the aristocracy during the Gilded Age is an ego boost, there are plenty of humbling moments.

If there is a problem, for instance, site supervisors are the ones everybody looks to for answers and guidance. Sure, there are big, noteworthy things that site supervisors and staff do where they receive recognition. They create new programs that benefit tourists and local communities and deal with disasters like wildfires, runaway carriages, and roofs that have blown off historic buildings. 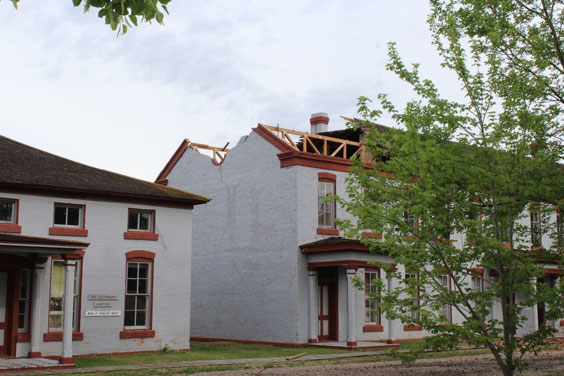 A windstorm in June blew the roof off the girl's dormitory at Fort Totten State Historic Site. Assistant Site Supervisor Lisa Rainbow led the cleanup efforts as Site Supervisor Kyle Nelson was away at the time.

But rarely are people aware of the less-than-glamorous, behind-the-scenes work that goes into the job, like the site supervisor at Fort Abercrombie State Historic Site cleaning bird feces off interpretive panels in the morning or the site supervisor at Fort Totten shoveling snow out of a building with a broken window or crawling under a historic building in the mud to diagnose a wiring problem. When a security alarm goes off at a state historic site at three in the morning, the site supervisor must get up and go check it out, even if it means driving 30 minutes there and 30 minutes back. I know of one site supervisor who even chose to spend his anniversary at a three-hour city council meeting in order to represent the agency on an issue. Site supervisors step up and tackle challenges as they arise because it is what needs to be done.

I’ll never forget the time I was visiting the Oscar-Zero facility at the Ronald Reagan Minuteman Missile State Historic Site last summer, and the site was hosting a large family group. The staff did a great job. However, while preparing to leave the facility for their next location, the visitors exposed a problem with the plumbing, which resulted in both the men and women's toilets clogging simultaneously. Site Supervisor Rob Branting tried his best to expel the clogs and restore proper flow. He called every plumber in the phone book looking for relief but finding a plumber on a Friday afternoon in a rural community can be a challenge. Rob went so far as to walk out into the nearly dried sewage lagoon to see if water was flowing out from the facility. Now that is truly going above and beyond. 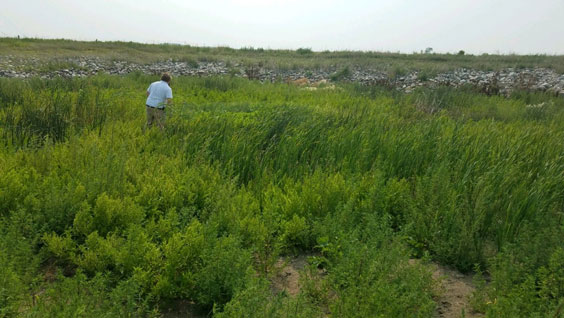 Site Supervisor Rob Branting walks to the center of a sewage lagoon at the Ronald Reagan Minuteman Missile State Historic Site to check on the water flow.

When I talk about my job, I often talk about how I get to work with fantastic colleagues. The agency and the people of North Dakota are lucky to have hardworking, knowledgeable, and passionate staff supervising our state historic sites. Our historic sites are in good hands, and I am proud of all our site staff's work, whether I hear about it or not. But for the record, I do prefer to hear about it.