While most of my internship at the State Historical Society was spent working with collections in the deep recesses of the museum, one of my projects was to create an exhibit commemorating the upcoming 100th anniversary of woman suffrage (right to vote). This meant my work was actually going to be seen by the public, as I was writing, designing, and compiling objects specifically for public viewing. It was an exciting change! While planning for this exhibit, I decided to expand upon the topic and include not only objects related to the early suffrage movement, but also highlight North Dakota women’s leadership and activism through the 20th century, showing how the ripples from the woman suffrage movement continue today.

To help illustrate the scope of these women’s work, I chose objects from international and national women’s rights events and the push for the Equal Rights Amendment (ERA) in the 1970s and ’80s. 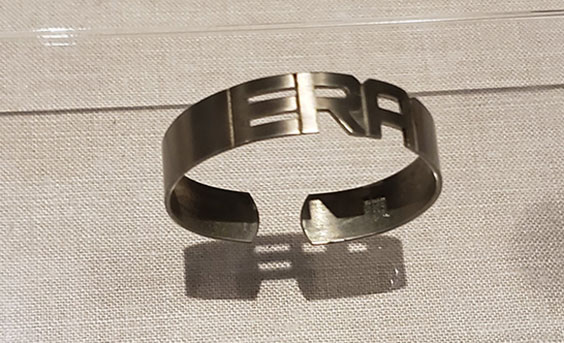 The museum collection holds many artifacts related to women’s rights activism, most of them being buttons, ribbons, and clothing. But there was one unusual item: this bracelet from the 1970s. It has a cutout reading ERA, referring to the Equal Rights Amendment, a proposed amendment to the US Constitution guaranteeing equal rights regardless of sex. This bracelet is the only piece of women’s activism jewelry in the collection, directly drawing attention to the ERA and the ongoing fight to ratify it. 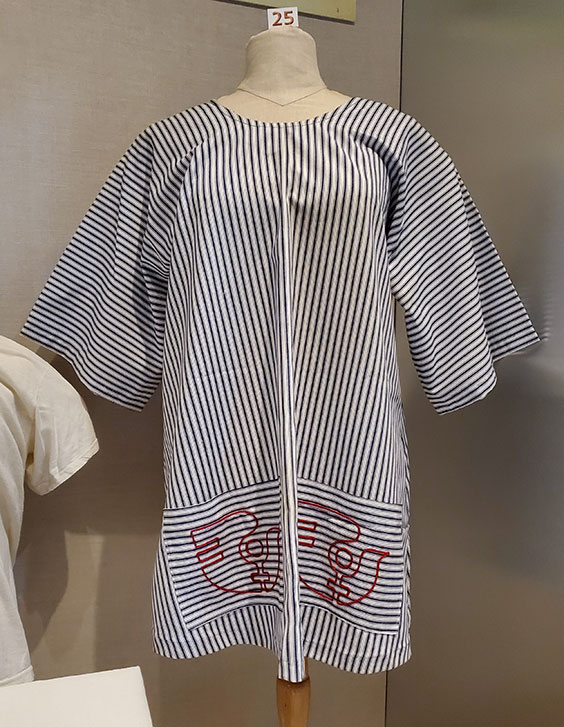 This smock is from International Women’s Year (1975). The garment is from the donor’s days as an activist working to gain ratification of the ERA. In choosing it for the exhibit, I hoped to put women’s activism in a global context, as International Women's Year was celebrated by the United Nations. So not only is the smock fashionable, it’s making a political statement and is a marker for a year in which women’s rights were recognized on a global scale. 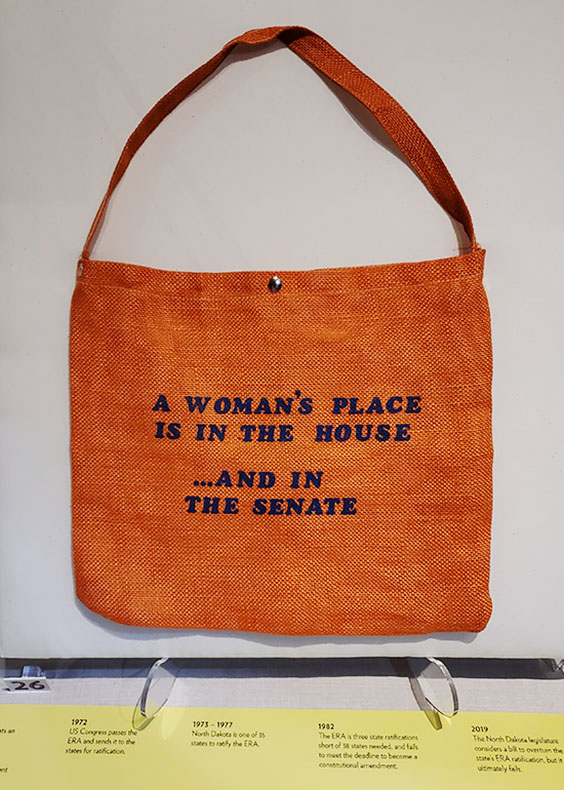 Finally, one of my favorite artifacts in the exhibit is this tote bag reading “A woman’s place is in the House . . . and in the Senate.” This object’s existence is a direct result of women becoming engaged in politics. It was purchased by the donor in 1981 during the 53rd Girls Nation held at Georgetown University in Washington, DC. I loved researching Girls Nation, an ongoing program introducing girls to the workings of government. This tote helps show the scope of organizations encouraging women to become leaders in their communities, while also proudly bearing a slogan I’d like to cross-stitch onto a pillow. 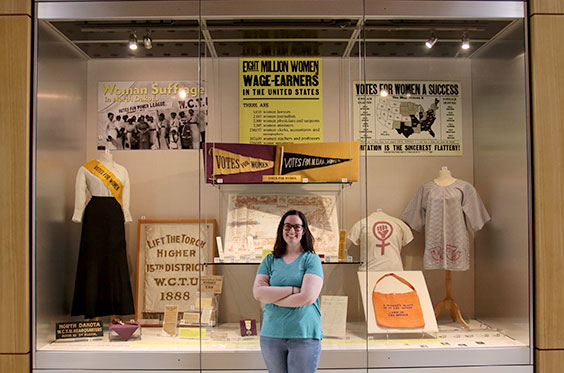 By expanding the scope of the exhibit using these objects, I hoped to draw a direct line from women gaining suffrage to activism continuing through the 20th century and today. Women’s direct participation in politics and activism helped pass the 1917 North Dakota Suffrage Bill, and continued activism by women in the decades following have strengthened support for advances in equality like the ERA. I love how the exhibit turned out, and it made me hopeful that the State Historical Society museum collection will continue to add artifacts symbolizing North Dakota’s history of women’s activism.