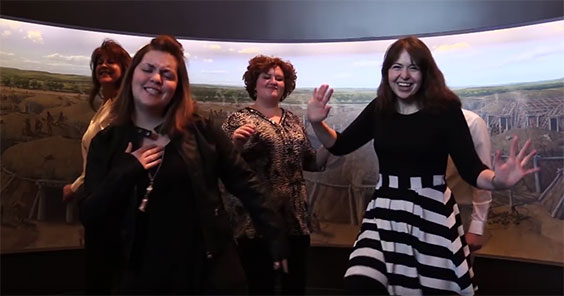 Museum staff Kiri Stone, museum intern Anna Killian, and museum docent Stephen Deutsch dance behind Lindsay and me during our museum dance off.

This is why we (occasionally) dance in museums.

Once upon a time, a blog was formed by a museum professional as an inside joke about things that happen in museums. The blog denoted the humor, joys, and frustrations of museum life, and became well-known to many individuals working and interested in museums. “When you work at a museum” continues to educate people in so many amusing ways that museums and their staff are not stodgy or static, but are vibrant and alive.

Through that blog, the official Museum Dance Off became a thing. It started with just a handful of videos of museum workers dancing. This year, we joined the 4th annual Museum Dance Off, along with 40 other museums from across the world (that’s right—this is an international competition)!

We didn’t make it out of the first round, but we still love our video. If you haven’t viewed it yet, you can take a peek on YouTube here.

We had so much fun making our submission that I thought the readers of our blog might enjoy a taste of the behind-the-scenes action that led to our beloved film. 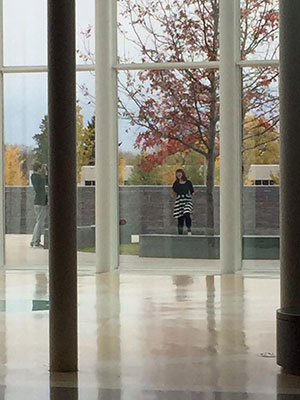 Taken by Geoff Woodcox, this photo shows Jessica Rockeman (on the left) filming me for the opening scenes in about October.

The song chosen for our video was Stereo Hearts by Gym Class Hero and Adam Levine. New Media Specialist Jessica Rockeman, our mastermind behind most of the Dance Off video, felt strongly that we needed a song that we (especially she) wouldn’t get sick of. This one fit the bill.

Many of us who work here have long been hoping that we might take part in it. I love dancing in all of its forms, and combining that passion with the idea of showcasing our awesome museum is just too exciting. Once I heard that we were going to try to submit for this year, I peppered Jess with questions as to where we were in the process. When she told me the song title, I exclaimed, “I love that song! I know it really well!”

There is a difference between knowing a song and performing it, though. Every clip was filmed multiple times, and sometimes it took a few takes until I had the right words.

“It’s always easy until the camera is on you,” Jess quipped.

We used this video to highlight the galleries and spaces available at our museum. Staff from all of our divisions joined in—in fact, Lindsay and I, the two “lead vocalists,” are both archives staff, and many others who participated or helped were from other divisions. It became a starting point for future endeavors of this type and more, the type of project that both promoted our place of work in many different ways and also showed what fun our jobs are. Claudia Berg, our agency director, even has a cameo in the video. How awesome to see leadership supporting a fun project that showcases our facility! 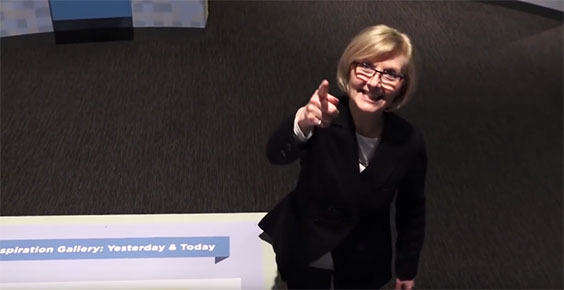 Jess made sure that we all wore black and white throughout the film. The reason for this, she said, is that the camera loves black and white. Since I was in so many scenes, I picked out one black and white number (a very comfortable dress that was easy to pull on) and changed into it when we were shooting. I was very concerned about maintaining continuity, to the point that I kept worrying about whether my shoes (which sometimes were boots rather than the shoes you see at the opening of the song) would show on camera, or whether people would notice that I wasn’t wearing my Fitbit Alta on my wrist, or that I was wearing an additional ring during the filming. Jess laughed at this.

“No one will notice,” she said.

It’s true. You have to look really closely to notice many of the things I was concerned about—including that my hair grew probably 1-2 inches from the beginning of the filming to the end. After all, we started in about September, grabbing time whenever we could. All of the outdoor scenes were shot in the fall. We ended the filming a week or two before our deadline in March. Thank goodness we started early! 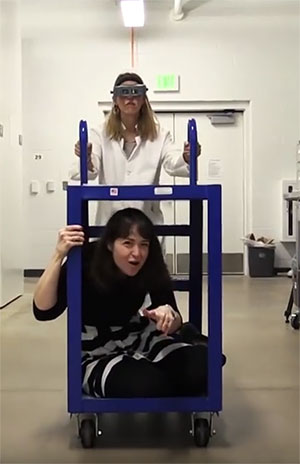 Wendi is pushing me through their collections area.

Oh. There is so much I can say about this video. I literally shed blood and sweat for this project (dancing around in the atrium got pretty warm that afternoon, and I cut my hands up at least once during the filming process). Probably tears, too, from laughing so hard. But it was SO MUCH FUN. From Wendi suggesting that she would push me through a collections area in the bottom of a cart to Becky letting us use the mosasaur puppet she crafted for use with children’s programs, we really took this little film to a level we could be proud of.

We didn’t win this year. (Congratulations, Herman Otto Muzeum of Miskolc, Hungary, for your success in the Museum Dance Off 4: A New Hope! You can watch their video here.) But we did come away with a great experience and ideas for the next dance off.

Next year will be our year!

Here, we are in Archaeology’s collections and work area, with Meagan Schoenfelder (right) and Brooke Morgan (left) making this scene amazing. They were so into this portion. It was hilarious and remains one of my favorite shots.