In the previous Corridor of Time exhibit, there was a 6 foot long skull that for the most part went unnoticed. How is that possible? I’m glad you asked! It shared a platform with two Dromaeosaurus, and sat about 4 feet off the ground. The jacket (the plaster & burlap surrounding the fossil) was placed flat into the surface. It was a view most people were unused to seeing such a large skull in, and so it was overlooked.

In the new Adaptation Gallery: Geologic Time, that problem has been solved. The skull now sits propped up, surrounded by rock, and extremely visible next to our full-size Triceratops skeleton cast. This is the story of how it got there.

When the original display was dismantled, we had two main goals. First we needed to do additional restoration of the skull. Second, we had to figure out how to better display it. In the time between the original skull restoration many years ago, and preparing for the new exhibit, our paleontology lab had acquired new tools for cleaning, one is called a microblaster. Think sandblaster, only using baking soda instead. Why baking soda? Well, if you look at the particles under a microscope, you will see they’re actually pointed and jagged – but not so abrasive as actual sand. Generally fossils we clean with the microblaster are placed in a blasting box with a filter hooked up to collect all the dust. The Triceratops skull was much too large, and too heavy, to fit inside even our largest blasting box. We had to create a makeshift shield that would collect the wayward dust, and not spread it everywhere… We succeeded, and removed the last bits of dirt (which we call matrix) from around the bone, exposing the beautiful natural chocolate color of the fossil.

The skull is so fragile and heavy, there isn’t a good way to remove it from its plaster jacket cradle. So, to display the fossil, we would have to include all the plaster and wood frame that supported it. Some of our display bases and forms were created by an exhibits company, including the metal frame that now hides below the skull, propping it up. We couldn’t just leave it like that however. Wanting to draw attention to the fossil, away from the support materials, we decided to build a fake rock wall around it. It needed to be light, yet durable, and still look like rock. This took a many-step process of measuring, creating a pattern, cutting the pieces out of foam, making sure they fit, then covering the whole thing with a sculpting epoxy. Adding difficulty to this process is the fact that the skull, now in its permanent home, was upstairs in the new gallery, and our fabrication area for building the wall was downstairs!

With the rock wall now painted and in place, the Triceratops skull looks like it is nestled in the rock outcrop it was originally excavated from. 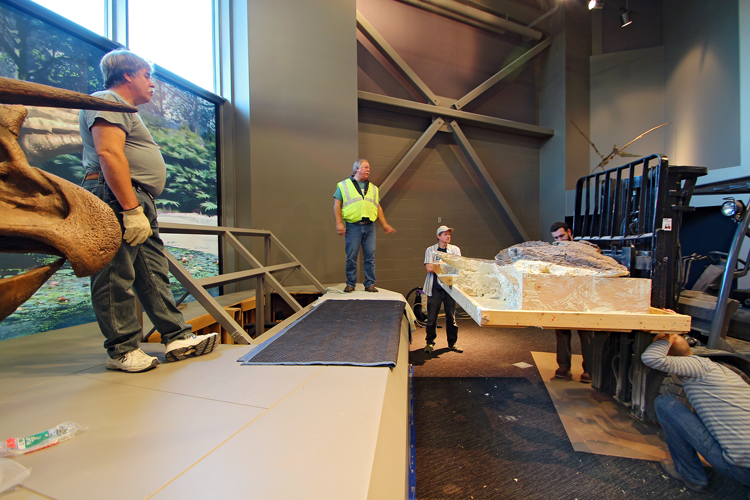 Moving the "Triceratops" skull with a forklift – people at the ready to help hold it in place. 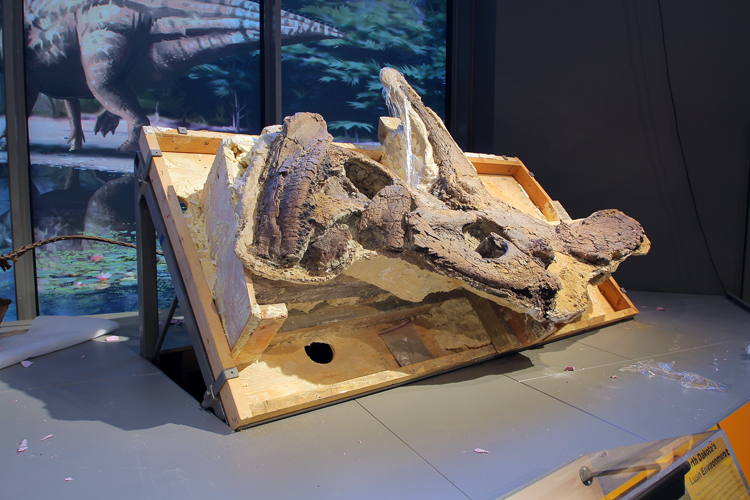 The skull is in place! This is why it needed a little faux-rock makeover. 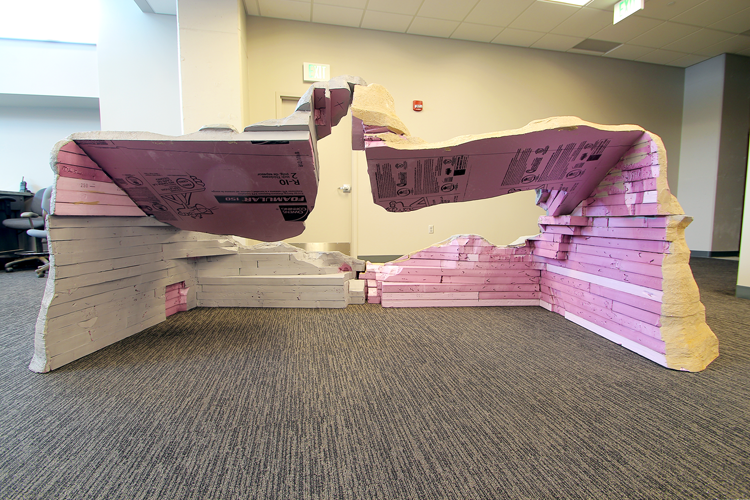 The guts of the rock wall – insulation foam, sculpting epoxy, sand, and paint. 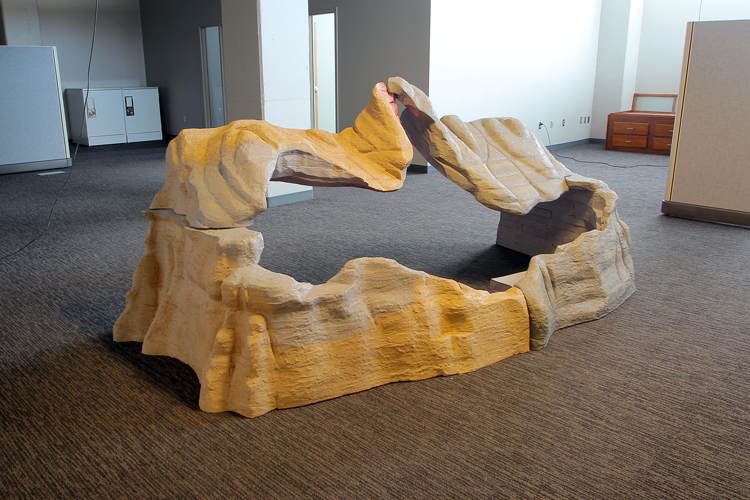 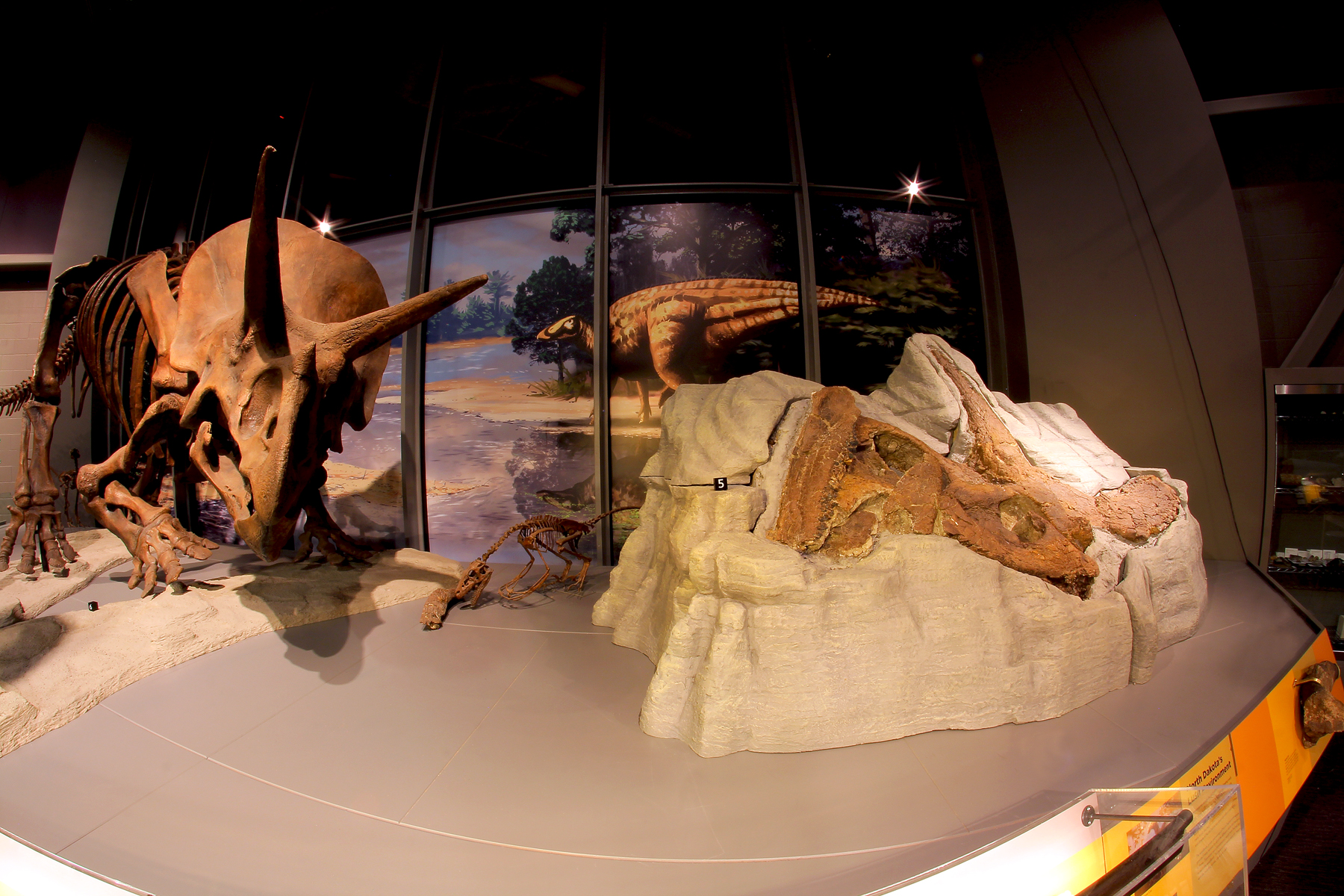