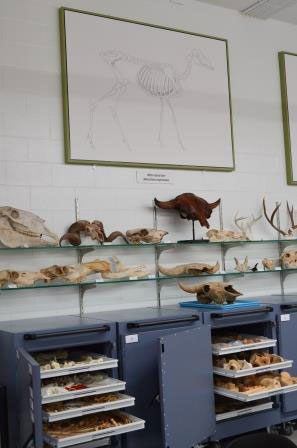 How do we acquire intact animal skeletons? Museums may purchase them from retailers specializing in processing natural skeletons and creating replicas. Or, skeletal remains may be collected and/or donated. If collected, processing and cleaning are often necessary. These tasks may be done manually but can be tedious and smelly work. A way around this is to use a dermestid beetle colony. One species of dermestid beetle, Dermestes maculatus, has been used for over 150 years by museums, universities, and taxidermists to clean skeletal material. Many museums, including the SHSND, do not maintain a colony for fear that the beetles may escape and destroy certain types of artifacts. So, we outsource the work. When the processing and cleaning are complete, the skeletal elements are added to our comparative collection.

The larvae and adults of these carrion beetles will feed on the muscle, fat, tendons, etc. and leave the bones and teeth clean of soft tissues. Cartilage may or may not be consumed by the beetles depending upon how soft the cartilage is and how hungry the beetles are. Dermestid beetles do not feed on live tissue; therefore, live larvae and adults can be handled without concern of being bitten. 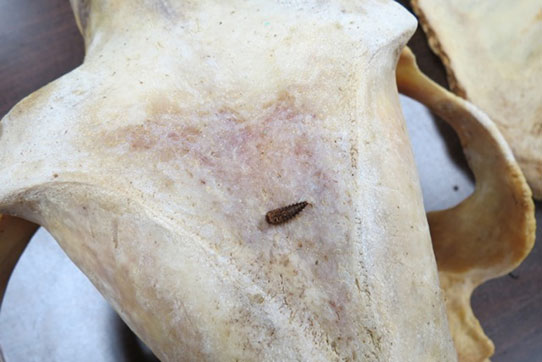 A dermestid beetle on a newly cleaned skull.

Female adult dermestid beetles lay several hundred eggs which hatch after about a week into tiny larvae. The larvae are covered externally by a relatively hard exoskeleton, and as they grow the larvae must emerge from this exoskeleton a number of times (5-11) to continue their development. Each one of these larval stages is called an instar. During this larval growth, the larvae increase in size from about 1/16 inch (1.5 mm) to about ½ inch (12 mm). The smallest instars are able to get into tiny spaces, for example, those in a mouse head, and eat the soft tissues within these areas. At the end of the last larval instar, the larvae form a pupa. After a period of time allowing for metamorphosis, an adult beetle emerges from the pupa. Adults are about 3/8 inches (8-10 mm) in length. The female will breed, lay eggs, and thus start a new generation of beetles. Adults live about 4 months.

SHSND archaeologists have partnered with a retired professor of a regional university who has access to a dermestid colony. For four decades the colony has cleaned specimens to be used for education and research. These dermestids have cleaned several specimens for us including a grizzly bear, a mountain lion, an otter, and a marten. 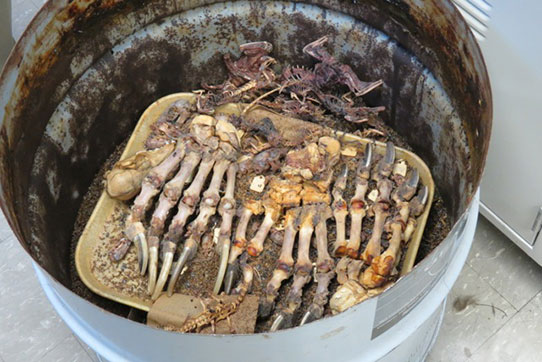 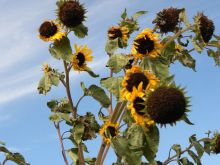 Amy Bleier is a Research Archaeologist in the Archaeology and Historic Preservation Division. One of Amy’s tasks is to assist with the production of the North Dakota Archaeology Awareness poster.