This is the second blog in a series on the Beadmaker archaeological site, a Mandan campsite dating to AD 1600-1650 near the Heart River. I previously wrote a brief background on Beadmaker, which you can find here (blog.statemuseum.nd.gov/blog/beadmaker).

Ornamental stone bead production is a fascinating aspect of life at Beadmaker. More than 120 beads in various stages of manufacture have been recovered from the site. Like other types of technology, beads were manufactured in a set of successive stages: (1) obtaining raw material, (2) initial shaping, (3) preparation for drilling and actual drilling, (4) shaping/smoothing after drilling, and (5) final shaping/rounding of bead. Mandan people might not have recognized these as distinct phases, but this type of classification helps archaeologists understand how beads were produced and the thought process behind their manufacture. At Beadmaker, stone beads come in both disc and cylindrical forms. 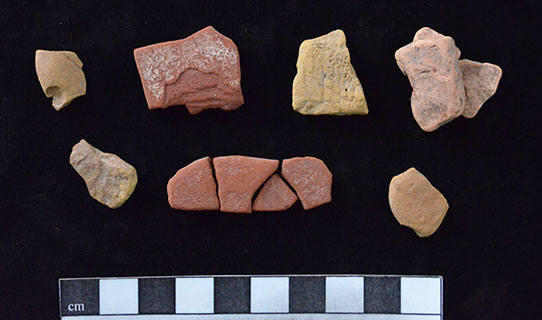 Stage 1: Obtaining raw material. These are pieces of soft siltstone or mudstone.

Beads were made on soft siltstones found locally in a variety of colors. It was fairly easy to carve or grind these stones. Think about scratching a piece of scoria road rock with your fingernail, and you’ll get a sense of how “soft” these rocks are. 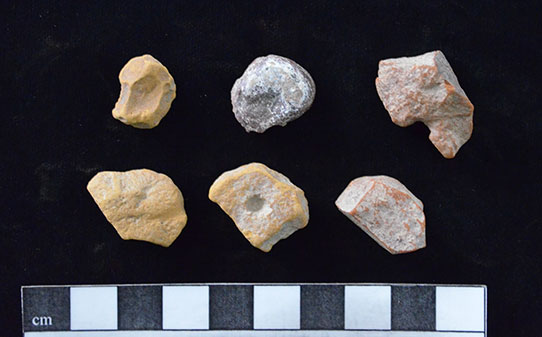 After choosing pieces of siltstone for raw material, the stoneworkers would shape the rock to create a “blank,” or a piece that begins to resemble the eventual shape of the bead. Two of these rocks show the beginning of drill marks, suggesting the initial blank shape may have been achieved or a type of pilot hole was started to give the beadmaker a sense of the center. A beadmaker had to be careful during grinding and plan ahead to the final product, because once material was removed, it could not be put back again. The softness of the material probably allowed people to modify their plans as they worked, in case they made a mistake.

Left - Stage 3: Preparation for drilling. These bead blanks have been rounded and smoothed.
Right - A very small (~1 inch) flake tool used to drill beads. This could be held between the thumb and forefinger and twisted repeatedly.

After a beadmaker attained the desired shape, beads were prepared for drilling and drilled using a small flake tool. If the bead blank broke during this process, it was either reshaped or discarded. Drilling was probably the most difficult step of manufacture; even if a blank was successfully drilled, the bead itself became more fragile with the addition of a hole. This could make further shaping after drilling risky, as the bead could snap in half. This is seen fairly regularly in the next stage of production.

Left - Stage 4: Shaping and smoothing after drilling. These beads broke either during or shortly after drilling. Note the ridged drill marks on the specimen in the top row, second from left.
Right - Two pieces of a tubular bead that refit. The center and outside are very smooth, suggesting this bead may have been finished but then accidentally stepped on or broken.

Most of these beads show drill holes that pass all the way through the center, but the beads then snapped or cracked. The two tubular pieces in the image above actually fit together, and may represent a finished bead that was accidentally trampled or crushed when people walked around their camp. 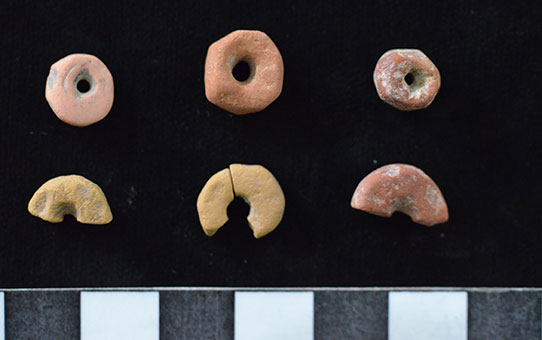 So why are there so many stone beads at Beadmaker? If the interpretation of a hunting camp is correct, it’s plausible that the men had downtime while waiting for scouts to return with a report on bison location and movement. Perhaps older men used this time to teach younger men how to craft these ornamental objects. With a seemingly endless supply of raw material on hand, the novice beadmakers could try their hand at bead manufacture without worrying about wasting stone. 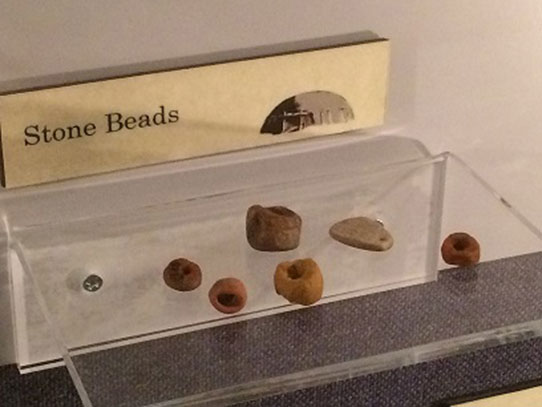 Stone beads appear at other Mandan sites, including Huff, Bagnell, and On-a-Slant Villages, indicating these were probably an important feature of decoration and group identification prior to the arrival of glass trade beads.