While working from home the past two months, collection staff in the Audience Engagement and Museum Division started a long-needed data cleanup project. While often tedious, one part of this project I am truly enjoying is researching the first names of women who we only have recorded as “Mrs. Last Name,” or “Mrs. Husband’s Name.”

The New York Times recently published a series called “The Mrs. Files” discussing the same type of project. This article articulates the tradition of using a husband’s name to refer to a married woman.

Women using “Mrs. Husband’s Name” in a social and official capacity was very common, although it seems odd looking at it from a contemporary point of view. Many of the artifact donation forms from the early days of the State Historical Society are signed this way, and this continued well into the 1980s.

I believe it is important that these women are remembered as themselves, not only by the names of their loved ones. Researching and recording these first names ensures their work and contributions to the state’s history are remembered.

In 1936, the North Dakota Federation of Women’s Clubs donated a sampler created by a Mrs. Adams from LaMoure. In this case, the artifact itself helped identify the artist, as Mrs. Adams embroidered her initials, “O.M.A.” I didn’t think many Adamses would be living in LaMoure during that period, so I looked through census records. In the 1940 census, three women with the last name Adams appeared in LaMoure County; one was Olive. To confirm this suspicion, I looked at the 1930 census, and listed below her husband Paul was “Olive M. Adams.” Digging a little further I learned Olive Marshall, born in 1879, married Paul Adams, a prominent LaMoure banker, in 1904. Looking into newspapers from the area would probably reveal even more about Olive M. Adams, but for now, her full name fills gaps in the sampler’s history. 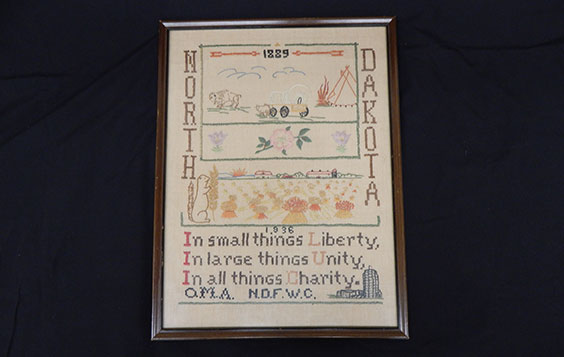 There are beautiful pieces of beadwork in the State Historical Society’s collection attributed to Mrs. William P. Zahn. Researching Mrs. Zahn was not difficult because her son, Frank B. Zahn, donated the items. Frank, a prominent North Dakota judge and historian, was easy to find. According to his obituary, Frank was the son of William P. and Kezewin Zahn.1 Kezewin was the daughter of Yanktonai chief Flying Cloud and appears in some Federal and Indian census records under the English-Christian name Mary Josephine Zahn (an assimilationist re-naming practice deserving of its own full article). I knew the State Archives had records from Frank Zahn, so I did a quick search and they have multiple photos of Kezewin and her family!

How striking is it to put not only a full name, but also a face to the woman who made this piece! 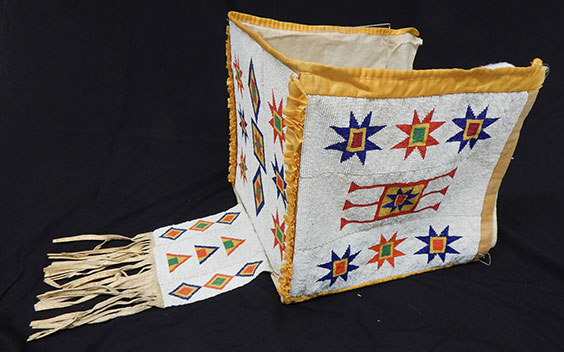 In 1956, Mrs. Otto A. Matzek donated the wedding dress of her mother, Mrs. John Kruger. This one was harder. I had two people to find. Once I found that Mrs. Matzek was Edith Kruger Matzek, finding her mother became easier. Researching Gerahdina “Dena” Detmer Kruger revealed two things. First, we had the wrong date recorded for the dress. The donor misremembered her mother’s wedding date as January 1912. The Weekly-Time Record out of Valley City announced the upcoming wedding of Miss Dena Detmer and John W. Kruger on January 15, 1913.2 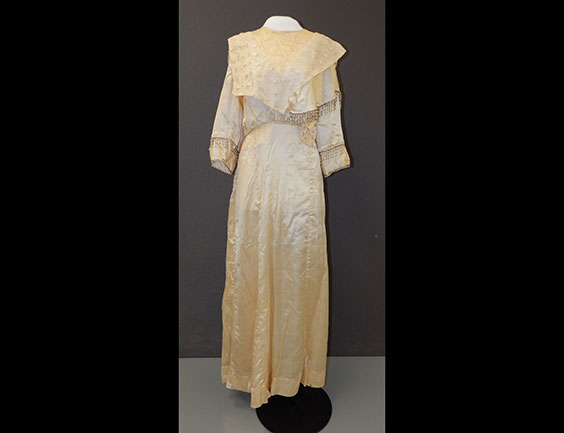 Second, it turns out that Dena Detmer was a postmaster for Lucca in Barnes County in the 1930s! How cool is that?! 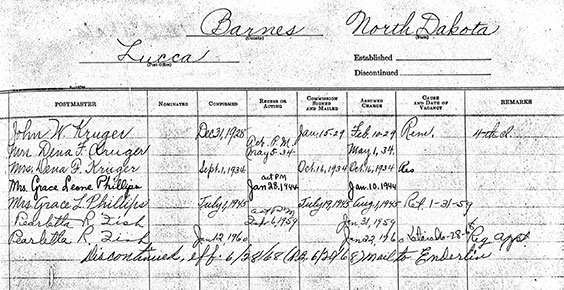 The State Historical Society has artifacts and records attributed to women around the state using their husband’s names. We don’t know if they did this simply because it was the social norm, or if that was their preferred title. Perhaps early record keepers made the decision for them. Whatever the reason, documenting the women’s full names builds a richer and more complete picture of North Dakota’s history.