As a paleontologist, I have found that there are a few misconceptions about dinosaurs. Some of them have gone by the wayside when the research has been able to penetrate the media bombardment we face every day, while others have persisted for decades for a variety of reasons. One of these seemingly undying myths is the idea that oil comes from dinosaurs. This is an interesting idea that I believe stems from a pop culture phenomenon nearly 100 years old.

Most people have a basic understanding that oil comes from dead plants/animals/organic matter. However the misconception comes when thinking about which animals and plant remains helped create that oil. I believe a great deal of this misunderstanding comes from the Sinclair Oil symbol—a small, green, sauropod dinosaur named “Dino”. The reason for this symbol has nothing to do with where the oil is coming from, but rather has a more historical story. 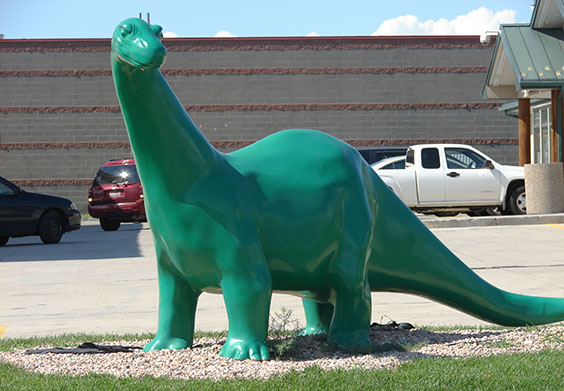 Dino, the Sinclair Oil mascot trademarked in 1932, was practically ubiquitous across the United States after WWII.

In the late 1800s and early 1900s, dinosaurs were big business. Museums across the eastern United States were scrambling to get the “best” skeleton and out-do other museums. They all wanted the biggest, most complete, fiercest, etc. This was the time of the infamous dinosaur wars. One of the prominent paleontologists at this time was Barnum Brown. He was the discoverer of Tyrannosaurus rex in 1902 (Osborn, 1905) and was a prolific fossil hunter. Some say he was the greatest dinosaur fossil collector ever. In the early 1900s, Brown had a relationship with the Sinclair Oil and Refining Corporation. He assisted in writing their promotional pamphlets and designing stamps in exchange for monetary support of his dinosaur collecting expeditions (Mitchell, 1998). 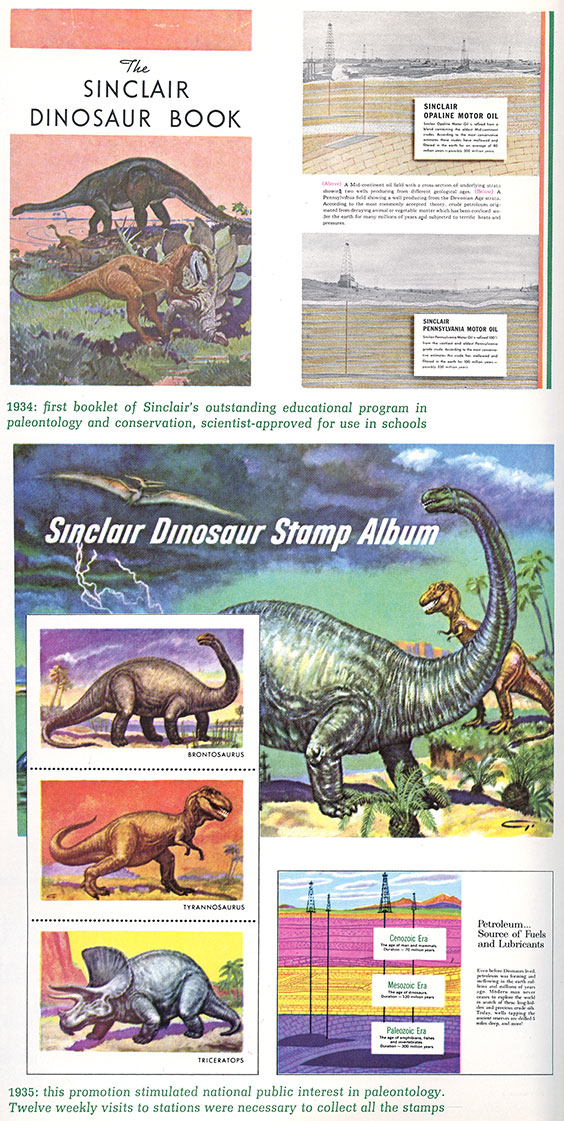 Images of Sinclair’s promotional and educational booklets handed out in the 1930s (Spence, 1966).

“To give better academic stature to its promotions, Sinclair financed for several years the dinosaur fossil search expeditions of Dr. Barnum Brown, then curator of fossil reptiles at the American Museum of Natural History,” (Spence, 1966). 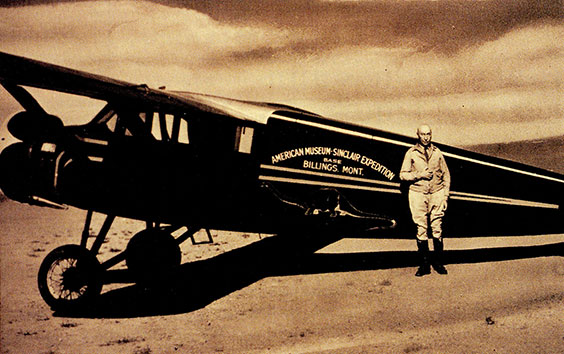 Barnum Brown of the American Museum of Natural History, ready to depart on a bone hunting expedition in 1934 (Spence, 1966).

To capitalize on the popularity of dinosaurs, “Dino” was created as a marketing tool aimed at getting customers to believe that better oil came from older rocks. One of their marketing signs claimed it was “mellowed 80 million years” (Spence, 1966). The public equated Dino with power, endurance, and stamina (Spence, 1966). I’m sure those were qualities that Sinclair was happy to be branded with. Although the pamphlets and stamp books made reference to how oil was formed even before the dinosaurs existed, it seems the association of Dino and oil was too difficult to separate. 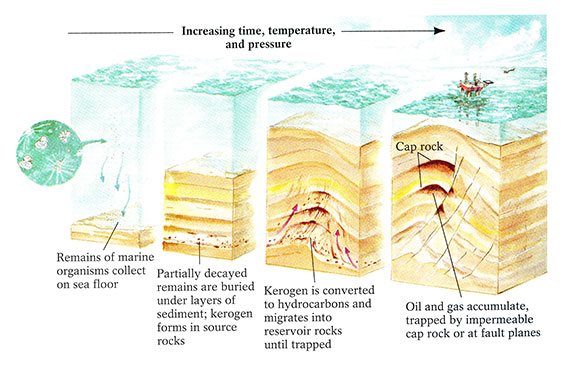 How oil actually forms:
When plants and animals living in the world’s oceans die, they sink to the ocean floor where their remains are eventually buried by sediment. Over time, as more of this organic matter is accumulated and buried deeper and deeper, it begins to change. Once certain pressures and temperatures are reached underground, the organic material changes into a substance called kerogen. As kerogen is buried even deeper, the increasing temperature and pressure transform it into hydrocarbons – the main constituents of crude oil and gas . The hydrocarbons will migrate through the pore spaces in rocks and accumulate in natural traps and pool together. It is these traps and pools that oil companies are searching for when they drill oil wells. It was this same process that occurred in North Dakota and formed the Bakken crude being drilled today (Nordeng, 2014).