Archaeologists have a solid understanding of Mandan lifeways at Huff Indian Village State Historic Site, primarily as a result of extensive excavations in 1960 as part of the Smithsonian Institution River Basin Surveys1 and additional geophysical and archaeological testing in 19992. But Huff Village was known to archaeologists prior to this time—in fact, it was first recorded as early as 1904 by Ernst R. Steinbrueck, who worked as a field officer for the State Historical Society. Under the direction of Orin G. Libby, Steinbrueck created a list of sites and produced location maps for villages along the Missouri River. One such map in the archaeology collections is dated December 22, 1906, and titled “Map showing approximate location of the ancient Indian village sites found since 1902” (Figure 1). Some familiar sites appear on this map. On the east side of the river, Double Ditch (No. 40) is visible. Fort Lincoln (No. 2) can be seen on the west side of the river. What we now call “Huff Village” was known by Steinbrueck and his contemporaries as “Arikara Fort,” and is No. 19 on this map. 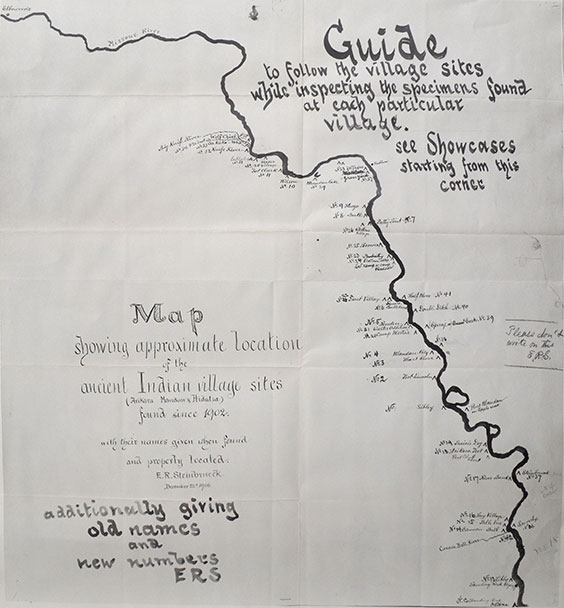 Archaeological knowledge changes over time, and in Steinbrueck’s era, archaeologists thought they had identified an Arikara village enclosed by a fortification wall—hence, Arikara Fort. We’ve known for some time that Huff is in fact a Mandan village, based on ceramics and other artifacts. But that isn’t the only thing that has changed: in 1908, Steinbrueck drew a map of “Arikara Fort” with 182 lodges inside the fortification ditch (Figure 2). Eleven of the houses are rectangular, and the rest are circular. Compare that map with one drawn by archaeologist W. Raymond Wood in 1960 (Figure 3). This map shows 102 houses, 101 of which are rectangular. On Wood’s map, there is only one square lodge with rounded corners, which could be interpreted as a circular lodge. 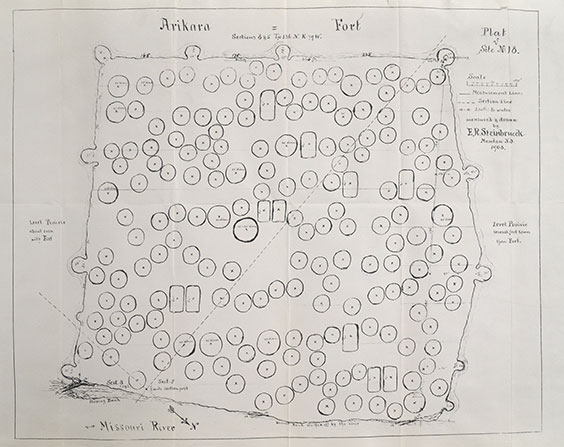 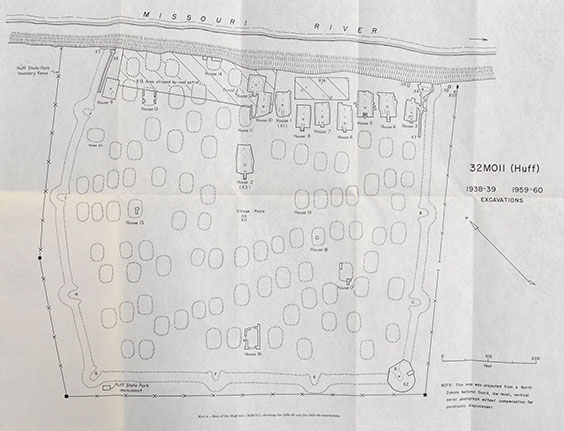 Wood assembled published and unpublished maps of Huff Village to show the variations in village interpretation over time (Figure 4). We now know that among the Mandan, long-rectangular houses preceded round earthlodges. This is evident at Huff, which dates to about AD 1450: the single round lodge shows that people were experimenting with a new form of housing. 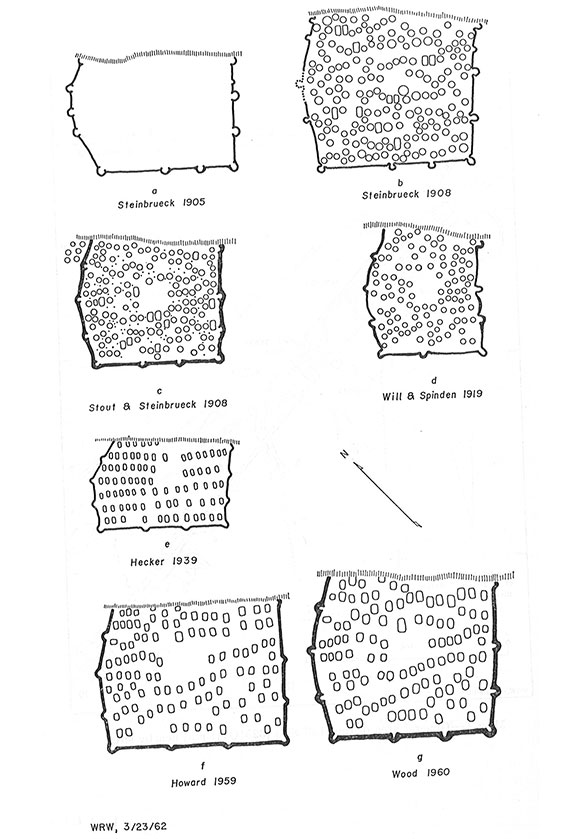 So why did early maps of Huff Village show circular lodges? Wood (1967:28) offers the following explanation:

This resume of the history of Huff cartography is particularly interesting in revealing the extent to which preconceptions effect the perception of field data. The first long-rectangular house excavated in North Dakota was House 5 at Huff, dug by Thad. Hecker in 1938-39. Prior to that time there was no hint in the literature of villages composed solely of long-rectangular houses. The local historic earth lodges were circular and, despite the large number of sites available of long-rectangular houses, field workers persisted in “seeing” the circular houses they expected to find.

In other words, people were familiar with the round earthlodges used historically by Mandan Indians and anticipated finding evidence of similar lodges in the archaeological record. This is a form of confirmation bias, or finding results that uphold your existing beliefs. It’s something that archaeologists—and all scientists—must be aware of in their research. The variation in the number of recorded lodges suggests some of the earliest drawings were impressionistic and not created using survey equipment. Improvement in mapping technology has allowed for extensive geophysical survey (including magnetic and electrical resistance surveys) to be performed at Huff. This helps archaeologists “see” underground and pinpoint individual features for excavation (Figure 5). 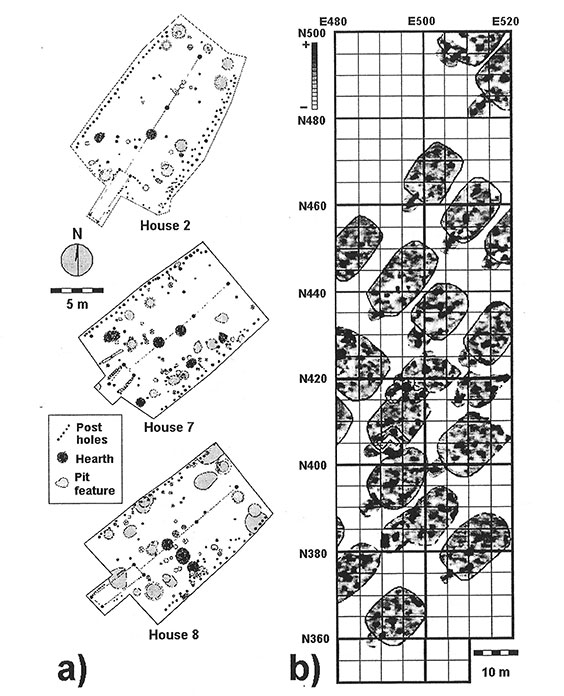 So what comes next in this second century of research at Huff? Researchers from the University of Texas at Dallas Geospatial Analytics and Innovative Applications Research Lab are using drone technology to take aerial photographs that can be georeferenced down to a centimeter. This precise form of mapping will improve our perception of microtopography (or small landscape features), as well as provide state-of-the-art figures for publication and outreach. There’s still much to learn from this exceptionally-preserved site. Take some time to visit Huff this fall, and observe the lodges and fortification ditch yourself.