Projectile points are attached to spears, arrows, and darts and have been used for hunting and warfare. They vary in size, shape, as well as workmanship and are made of a variety of materials, including stone, bone, antler, and metal. Most projectile points were attached to shafts. Spear shafts were thrown by hand or with a spear-thrower (atlatl). Projectile points are time-diagnostic artifacts. Their style or type is useful in estimating the age of a particular site and assigning a regional cultural tradition.

In December 2020 the State Historical Society’s Archaeology and Historic Preservation Department received a collection consisting of 47 projectile stone points and fragments and one flake tool from a donor. This collection is from the Max site (32ML1350) located in McLean County, North Dakota. Archaeologists assigned the Max site projectile points to the Cody cultural complex. (In archaeology, a complex is a grouping of related and/or associated traits, features, and artifacts, which comprise a complete process, activity, or cultural unit with known spatial and temporal dimensions.)

The Cody complex derives its name from Cody, Wyoming, where Eden and Scottsbluff projectile points were recovered in a good geological context. The co-occurrence of Eden and Scottsbluff points and Cody knives are the main markers of the complex. The points were made and used by early Holocene hunter-gatherers to hunt bison and other animals. In addition to the Eden and Scottsbluff points and Cody knives, the typical Cody site may consist of Alberta projectile points and other tools with dates generally ranging between 8,700 and 11,600 calibrated years before the present (Knell and Muñiz 2013, 13). This makes the Cody complex one of the longest Paleoindian cultural complexes in the prehistory of North America. The Cody material culture also covered a wide geographic region extending from Texas to the Canadian plains and from the Great Basin to the St. Lawrence River (Knell and Muñiz 2013, 3). 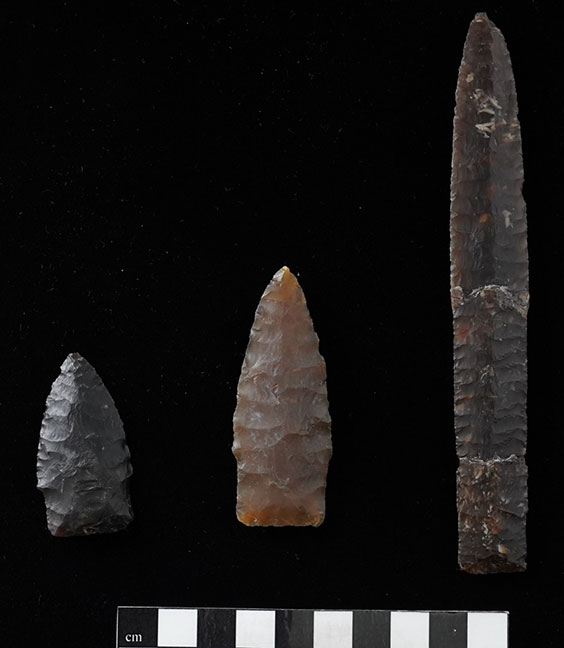 Examples of complete and refitted projectile points from the Max site include (from left) Scottsbluff, Alberta, and Eden points. While Knife River Flint is the raw material for the Scottsbluff and Eden points, the Alberta point is made from brown translucent chert. SHSND AHP 2020A.3.41, 2020A.3.42, and 2020.3.47. Photo by David Nix and Meagan Schoenfelder

The Alberta points are generally regarded as the earliest projectile point type in the Cody complex chronology and are commonly found in the prairies of Alberta and Saskatchewan and into the northern Plains of the United States. While the Eden points are named after the Eden Valley in southwestern Wyoming, the Scottsbluff points get their name from the Scottsbluff Bison Quarry in Nebraska (Frison and Todd 1987). In terms of style, Eden points are slender, have a marked medial ridge creating a diamond-shaped cross section, and often have a short, narrow stem. On the other hand, Scottsbluff points are thinner in cross section, have wider faces, and are more triangular than Eden points. Alberta points are broadly similar to the Scottsbluff point types, yet the Alberta types are often larger in total size and have a longer stem (Fogle-Hatch 2015). 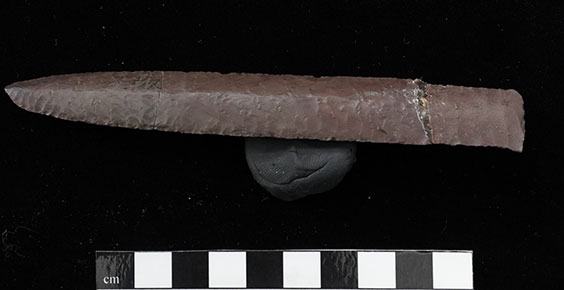 Red porcellanite Eden projectile point from the Max site. The marked medial ridge is a typical feature of Eden points. SHSND AHP 2020A.3.46. Photo by David Nix and Meagan Schoenfelder

More than 95% of the Max projectile points (45 out of 47) are grouped in the Cody complex: 30 are Eden points, 12 are Scottsbluff, and three are Alberta. The presence of Alberta, Eden, and Scottsbluff points at the Max site make it one of the typical Cody sites in the northern Plains region. Yet, save for the two pictured above, all the Scottsbluff and Alberta points from the Max site are fragments.

In terms of raw material type, the majority of the Max site projectile points (25 points or 56%) are Knife River Flint (KRF), 14 (31%) are porcellanite, and three (7%) are silicified wood. The presence of projectile points and their breaks indicate the points were found at the kill site or butchery location. Although we do not have a direct archaeological date for the Max site points, they might be contemporaneous with the Benz site (32DU452) artifacts, another Cody complex site located in the KRF quarry area in western North Dakota. The Cody complex artifacts from the Benz site, in Dunn County to the southwest of the Max site, date from 9,500 to 11,000 calibrated years before the present (Knell and Muñiz 2013, 8; Root, Knell, and Taylor 2013, 127-128). 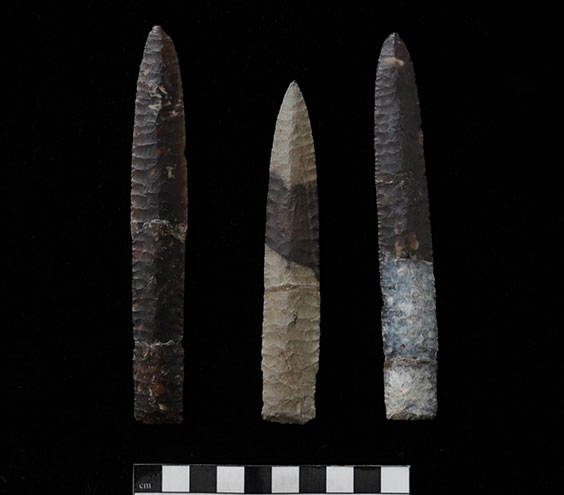 Eden projectile points from the Max site. While the points to the left and right are made from Knife River Flint, the one in the center is porcellanite. SHSND AHP 2020A.3.47, 2020A.3.44, and 2020A.3.45. Photo by David Nix and Meagan Schoenfelder 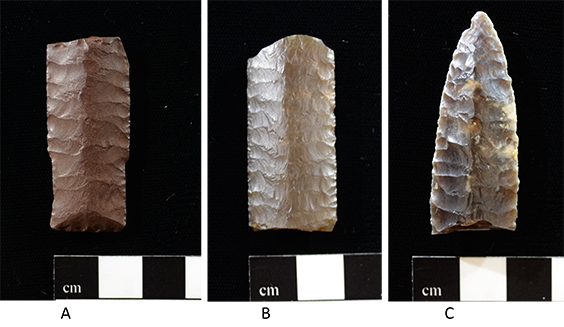