Earlier this year while doing some routine collections work we ran across a very small, nearly microscopic fossil. After a bit of research we identified it as a fragment of jaw from an early bat (NDGS 1691). 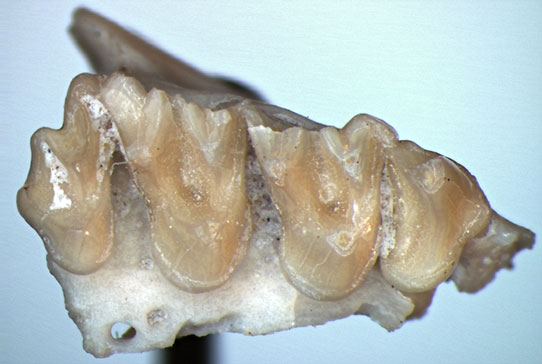 Due to the nature of powered flight, bats are pretty fragile animals. One needs to be relatively lightweight to be a successful flier, therefore most bats are relatively small and delicate creatures. As you can imagine, animals that are fragile and airborne have a relatively low chance of fossilizing. Adding to this, bats also tend to live and roost in caves and trees which are areas that are not very conducive for fossilization. Due to these factors, fossil bats are pretty rare, so this was a pretty cool discovery.

What makes this discovery even more exciting is the information about how old the bat was. The fossil record of bats contains many large gaps where no known fossils have been recovered. Some of these gaps might be as few as four million years or as many as 15 million years. Considering that for most fossil animals we have a nearly continuous record of evolution from its first appearance to its extinction or to modern times, these are large gaps. Some paleontologists argue that the fossil record of bats is the least known of all fossil animals. Using a system called biostratigraphy, we identified the associated animals found with the bat fossil and determined that this bat fossil was approximately 33 million years old. This age happens to be right in the middle of one of those large gaps where only one other bat fossil is known. That specimen, located at another museum, has since been lost to science, so this specimen is now the only existing bat fossil from this time period. We filled in a large hole in the fossil record of bats! Some might say a missing link had been found.

This bat will most likely be a new species of animal previously unknown to science. It helps us to understand the early evolution of bats and will be studied for years to come. The two other North Dakota Geological Survey paleontologists and I visit the site where this fossil was found every summer and hope to find more. This locality is one of our more productive sites. Who knows, maybe next summer we will find another bat or some other animal to fill in another gap.