1. Hollywood, as always, gets it wrong.
This may come as a surprise to our faithful readers, but movies do not accurately reflect real life — especially when it comes to museum work. Our dinosaurs and dioramas do not come alive at night and terrorize the security guards. Well, maybe they do, but the security guards aren’t telling. The archaeologists do not get to take epic adventures in which they both defeat Nazis and recover priceless artifacts, but I’m sure they wish they could when they’re filling out yet another site form.

2. Fashionable socks are a must.
There are a surprising number of times when you go shoeless working at a museum. Exhibits need regular attention such as changing a light bulb, dusting, placing an object, or removing a candy wrapper that someone threw in. Often this means physically climbing into a display space, but to safeguard the objects and keep from tracking in debris, the shoes have to come off. And you don’t want to be the person with mismatched socks.

3. Some days it’s just gross.
One day an agencywide email was sent that said, roughly, “Whose thawed bison head is in the freezer!?” We have a chest freezer for keeping specimens for the collections or killing bugs that sometimes hitch a ride on artifacts. The frozen bison head would have been okay. Except the freezer broke. 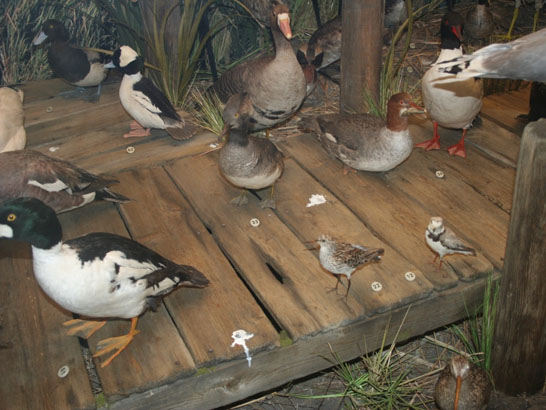 4. We use skills we never knew we needed.
Just a few of the stranger jobs the exhibit team has been tasked with include: assembling a windmill indoors, assessing the accuracy of fake bird poop, changing the tire on a Ford Model T, moving an entire mastodon skeleton 500 feet, debating the level of gore acceptable in a digital dinosaur battle, and researching where to purchase buffalo scent.

5. We get to work with AMAZING things.
Taken as a whole, museum collections are impressive —their size, scope, and age —and to some extent it becomes routine, working with these objects daily. However, there are pieces that give goosebumps — like one of the original Folios of Shakespeare’s plays, a thousands-of- years-old Phoenician tablet, or the broken gun carried by a follower of Sitting Bull — and it’s these that make you think, “I am SO lucky to work in a museum.”

Even when there’s an oozing bison skull in the freezer.