Another series of bones are being slowly added to the State Fossil collection. Concordia College in Moorhead, MN, held one of the largest collections of Edmontosaurus (“duck-billed” dinosaur – same kind of animal as “Dakota the Dinomummy”) bones in the country. Dr. Ron Nellermoe, who recently retired from a position of teaching biology and geology at the school, worked on a quarry of Edmontosaurus in South Dakota for over ten years. During that time, thousands of fossils were collected, many with beautiful preservation. This collection of fossils is where I got my start – my real start – in paleontology.

I had spent the last five years preparing Green River Formation fossil fish from Wyoming, so I wasn’t totally new to the time and patience needed for fossils. It was the spring of 1998; my grandmother had spotted an ad in the local paper about a “communiversity” course being offered on dinosaurs and fossils. I wanted to jump at the chance, but I had already watched one opportunity vanish. Two years prior, my aunt let me know about a dig in Wyoming – BUT – you had to be 15 to go. I waited a year, only to find out the dig had shut down. Now at 16, I wanted more than anything to go on this dig, but we weren’t sure if they would allow a high school student along.

My family contacted the school, and thus Dr. Nellermoe. He wasn’t thrilled about the idea of a 16-year-old girl going along. -Somehow they convinced him and assured him that an adult would accompany me on site. I was in! The spring was spent volunteering in the paleontology lab, learning how to clean and identify bones, and reading every paleontological reference book I could. Summer finally hit, and I dove into digging. I pulled my weight, probably asked way too many questions, kept a journal, and soaked up as much as I could. Meanwhile my Mom painted the local landscape. 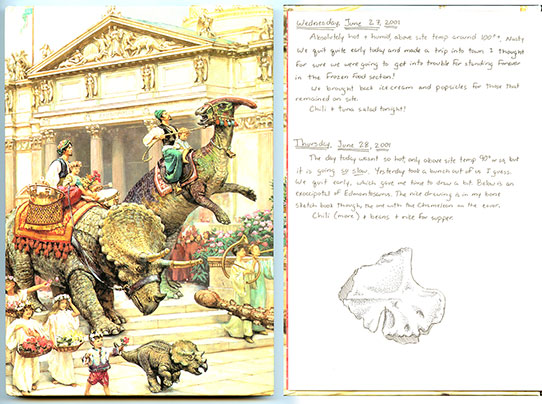 Pages from the first field journals Becky took at the Concordia Edmontosaurus quarry.

Fall hit – I was back volunteering in the lab. This kept up for the next two years until I finally could officially enroll at Concordia College. By this point, I transitioned my volunteering to work study and obtained one of my favorite job descriptions ever: bone technician. 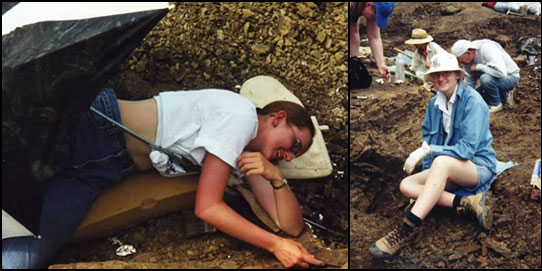 Becky hiding from the summer sun. OR A young Becky on site. OR both.

After Concordia, I continued my schooling at NDSU, using the Edmontosaurus collection as the basis for my Master’s degree. Eventually graduating and moving to Bismarck, I had to wave a fond farewell to the collection and professors that played such a large part in getting me to where I was. Then a few years later – a phone call. The science buildings at Concordia were undergoing a massive renovation, and there would be no room for bones. Would the State Fossil collection in Bismarck make a good home?

Long story short, we’re in the process of transferring the collection – I get the chance to continue working with the bones that started me on my way. 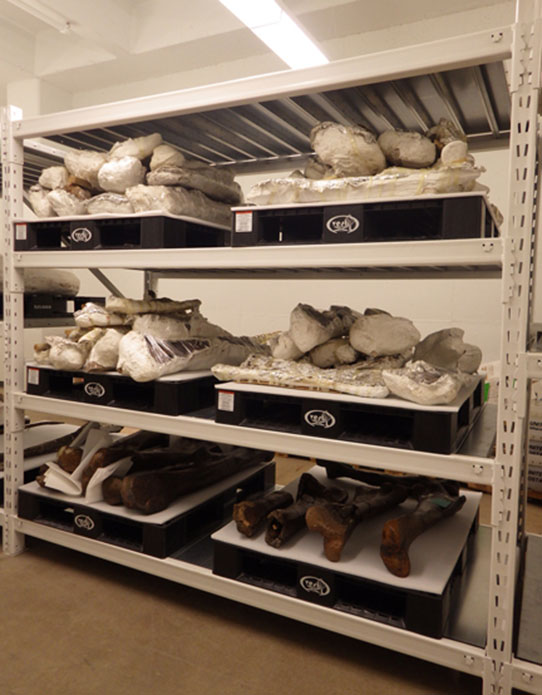 Plastered and finished bones moved to the State Fossil collection so far.