I’ll start by wishing you a very happy 2015! I hope that you had a marvelous time at the November 2, 2014, grand opening. If you missed it, plan on stopping by the North Dakota Heritage Center very soon because the exhibits are choice, the food is excellent, it’s warm, and there is ample available parking. 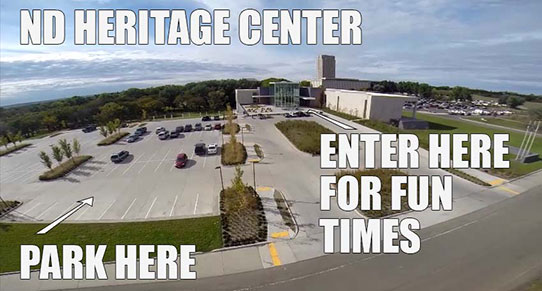 The start of a new year means we can get into full mode making more short film episodes, some about paleontology in collaboration with the North Dakota Geologic Survey team. So far, we’ve made videos about a public dig where a crocodile skeleton was excavated, digs at Pembina and Medora, and the cannonball concretions and petrified tree which can be found on the plaza.

Videos have a lot of competition these days, often in the form of cats doing anything online. In the olden days, making an educational video was easy. You recorded a narrator, stuck in a few shots of old pictures, then edited and covered the gaps with a piano piece. The whole affair took about 20 minutes over a cup of coffee.

So what, you may be wondering, do we all do to make it happen?

As one example, we filmed sixteen large boulders (called Cannonball concretions) being moved to specific areas on the Pembina River Plaza at the east entrance to the North Dakota Heritage Center & State Museum. Behind the scenes, someone had to coordinate with a construction company and find some large machinery to use for a couple of days. Then someone had to locate two moving crews from south of Fargo and get them out to Lake Hammond, near Mandan. Three paleontologists were involved in the move, and someone had to coordinate a video camera. While all this was going on, I was filming, tethered between being in the way and not falling over. 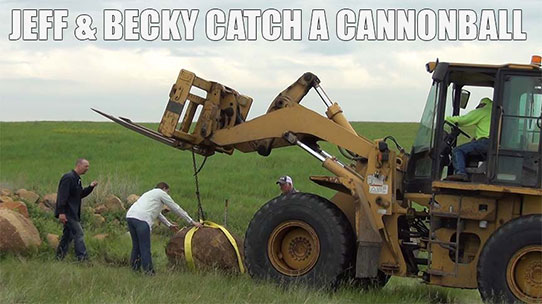 After the filming, I wrote the script. If that seems a bit backwards to write the script last instead of first, that’s because it is. But it sometimes works better to write after you’ve witnessed everything that happens to put an event in place.

A lot of people ask if these video episodes are set up. I promise you, here and now, they are not. We have stood in rainstorms, destroyed knees, driven into worlds far from any idea of roads, fallen off of large boulders with a camera in hand, and we don’t pull over for anything except fuel. We tend to take filming fairly seriously.

But not half as seriously as what it takes to edit all the clips, the audio, make the sound effects, create the arty segments, and find music for a show from start to finish. My goal is to show a high amount of science and “cool” within a relatively low budget. That’s the main reason why our channel’s videos don’t look like any other paleontological videos out there. Everybody works so amazingly hard to make something great.

Ultimately the fossil digging season is over, all production is completed, we read through the script to make sure it’s not all in Dutch, and Paleontologist Becky Barnes fixes any errors. In the normal world, the credits at the end of a program roll for about five seconds, whereas the ones we place at the end of our paleontology episodes make you feel as though you’ve been watching Ben-Hur (1959).  The lengthy list of people either involved behind the scenes or on camera is often on an epic level. We finish editing the last snippets of footage in the Heritage Center space that we’ve made into a studio. And that would be the part where every normal human being would go home and relax. So, of course, that is when we start planning for next season’s films.

I love the volume of caffeine we go through and the stamina out on the fossil digs. And I love the energy of people who ask what the next episode will be and the way people positively react when shown the films we worked so hard to make. Good luck getting that sort of creative buzz watching a cat play the piano! 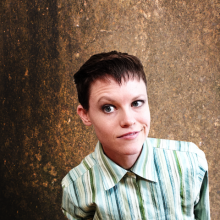 Jessica Rockeman is a New Media Specialist for the State Historical Society of North Dakota. Her duties include web, graphics, print, ND Studies materials, film and photography. She can often be spotted at the museum with a camera.