The common perception of the fur trade frontier from the 18th century to the mid-19th century may be one of a vast and harsh wilderness, where traders and indigenous people had to constantly battle the elements. In reality, the people who participated in the fur trade had at their disposal many of the comforts of a growing global trade network. The traders were responsible for exporting the furs used to make hats and fine clothing to the European market as well as importing luxuries from foreign markets to the prairie to exchange for those furs. Indigenous people participated in this economy by demanding and purchasing goods of the highest quality in exchange for the furs they acquired. Some of these items are on exhibit at the Pembina State Museum. There are original pipes, metal utensils and dishes, as well as shards of original stoneware and china on display. These items tell a tale of globe-spanning importance. 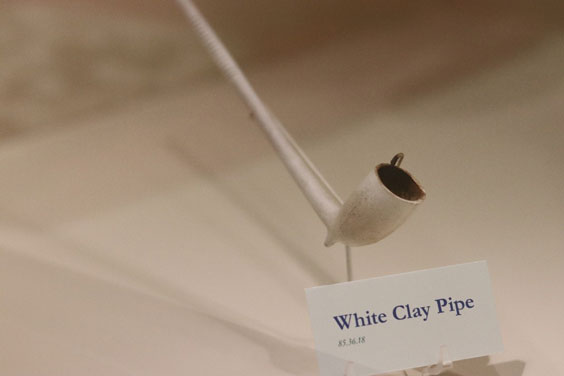 This 15-inch, long-stemmed clay pipe at Pembina State Museum is an example of a type of pipe popular from the late 17th century to the late 19th century. SHSND 85.36.18

One of the most popular luxuries was tobacco. Traded by both French voyageurs and the British Hudson’s Bay Company, tobacco was a highly demanded consumable commodity. An especially prized variety was Brazilian tobacco, which the Hudson’s Bay Co. imported from Portugal. Because of the Navigation Acts, which required all trade to be routed through London, the cost of foreign tobacco was high, as much as three times the cost of British tobacco. The Hudson’s Bay Co. sought to reduce the cost of shipping tobacco to Rupert’s Land, which encompassed all the land that drained into Hudson’s Bay, including Pembina and the Red River Valley. They accomplished this by importing tobacco from Virginia, then an English colony. However, they quickly discovered that their Native customers had developed a taste for Brazilian tobacco while trading with the French and would not buy their inferior product. To keep their customers happy, the Hudson’s Bay Co. switched back to importing the Brazilian variety at a premium price and even purchased tobacco from French and Dutch merchants in Europe when no other supply could be found.

Along with the tobacco, pipes, like the one in the museum gallery pictured above, were a common trade good. These clay pipes were manufactured in England and shipped in mass quantities to North America, not just to Rupert’s Land but to the Thirteen Colonies as well. These pipes were considered disposable, with the stem broken off after each use until only a stub remained. Both long and short-stemmed pipes were common. In Europe long-stemmed pipes were used by the upper class while workers preferred short-stemmed pipes which were easier to grip between their teeth, leaving their hands available for work. In Rupert’s Land the long-stemmed pipe was more common and used recreationally. By the mid-19th century, pipe stems could range from 18-to-24 inches long. 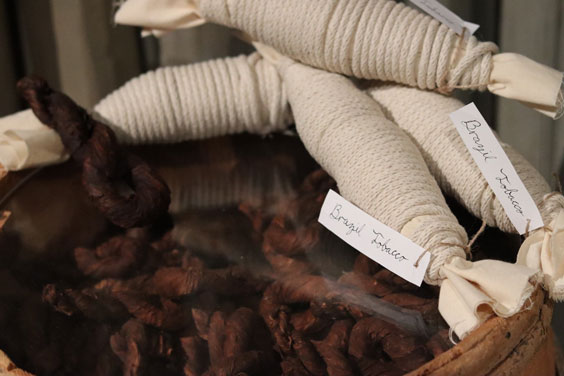 Tobacco was shipped in many forms. Tobacco carrots, the pieces wrapped in cloth and twine, were preferred for their ease of packing and the protection they provided against the elements on long canoe voyages. These examples pictured above are reproductions that visitors may interact with when they visit the Pembina State Museum.

Ceramics were another luxury imported by the Hudson’s Bay Co. in large quantities. At first these products were meant to be used by company employees at the trading posts and were not for exchange. But as the Métis, indigenous people descended from European fur traders and their Native wives, and other independent traders established themselves, the demand for these products increased. Primarily of English origin, by the 19th century, ceramics were popular with a rising middle class seeking ways to display its wealth to others. To satisfy demand, the Hudson’s Bay Co. would import as many as 3,600 pieces of pottery in a year from a single supplier in England. According to its shipping manifests, the most popular color was Royal Saxon blue. The patterns printed in this color were inspired by the oriental patterns of the fine china Europeans had imported since the late 15th century. European potters would subsequently incorporate other colors and patterns inspired by Italian Renaissance paintings and English flora. 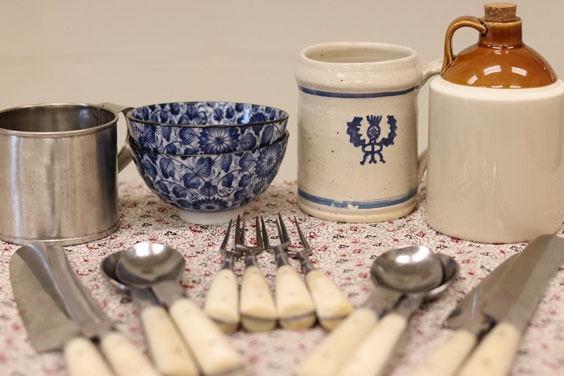 Ceramics and other fine pottery were a key luxury imported by the Hudson’s Bay Company. These replicas are part of the new “Red River Rendezvous” interpretive program which explores the process of exchange and material culture of the fur trade era, circa 1800.

In addition to fine pottery, trading companies also imported glass, stoneware, and metal dishes of pewter and tin. Other luxuries imported by the Hudson’s Bay Co. included ivory in the form of combs, alcohol, and sugar. Brandy was the preferred beverage of choice during the 18th century. The Hudson’s Bay Co. also imported rum from the Caribbean. They imported molasses from the Caribbean to make rum locally in Rupert’s Land as well, though rum was never as profitable as brandy. Sugar was not usually traded for furs but rather imported by the company from the Caribbean to keep its employees happy in their frontier posts. 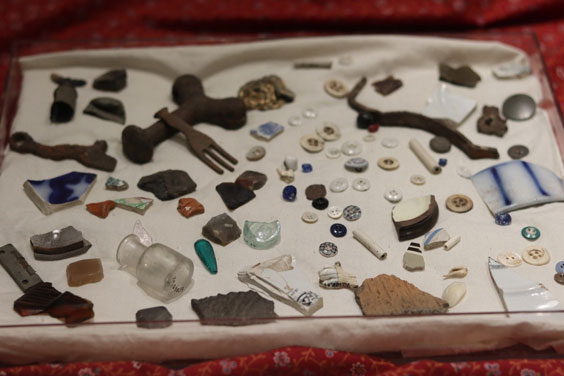 These broken bits on display in the Pembina State Museum were once valuable global commodities. The blue pieces are examples of the Royal Saxon blue color that was popular with Hudson’s Bay Company employees. Also shown here are remnants of pipe stems, glass beads and bottles, buttons, and metal utensils. SHSND 90.288.1-90.288.92

Today what remains of the network of trade that linked many different people together in the 18th and 19th centuries are broken pieces of items discarded long ago. These pieces, found at trading sites like Fort Pembina built by the confluence of the Red and Pembina rivers in 1801 or at the Gingras or Kittson trading posts constructed near St. Joseph’s (modern Walhalla) in the 1840s, represent what their owners likely would have considered to be garbage. Still, an interpreter can use these items to shed light on the nature of a globally linked economy and how local people participated in and influenced that economy. Despite its frontier location, Pembina and the rest of what would become northeast North Dakota represented a key spoke in the wheel of global trade.