At the beginning of May, the U.S. Army Corps of Engineers (Omaha office) hosted a three-day training at the North Dakota Heritage Center & State Museum on investigating and assessing damage to archaeology sites and other cultural resources. I was excited to receive this training, but expected it to be a bit of a slog, as many trainings tend to be—stuffy room, uncomfortable chairs, and text-heavy Powerpoint presentations. I could not have been more wrong.

So why did we attend this training? The primary objective underlining the Archaeology & Historic Preservation Division’s many responsibilities is to preserve North Dakota’s cultural resources. “Cultural resources” is an umbrella term for all types of sites that have historical or cultural significance. This includes (but is not limited to) archaeological sites, historical sites, architectural sites, and cultural heritage sites. There are various federal and state laws that were written to protect these resources. For example, the Archaeological Resources Protection Act (ARPA), passed in 1979, states:

It also prohibits the sale, exchange, transport, or receipt of (or offer to sell, purchase, or exchange) cultural resources if the resource was excavated or removed from public lands or Indian lands in violation of federal law.

ARPA applies to federal and Indian lands, but you may not know that North Dakota’s state laws protecting cultural resources are quite robust compared to those of other U.S. states. (I was well aware of the state laws that protect cultural resources on state lands, but I had no idea how far ahead of other states we are in this regard.) The North Dakota Century Code (55-03 Protection of Prehistoric Sites and Deposits) requires individuals to have a state-issued permit to investigate or evaluate cultural resources on state land. In this context, “cultural resources” include prehistoric or historic archaeological sites, burial mounds, and unregistered graves. Violations of this law are punishable by fine, imprisonment, or both. 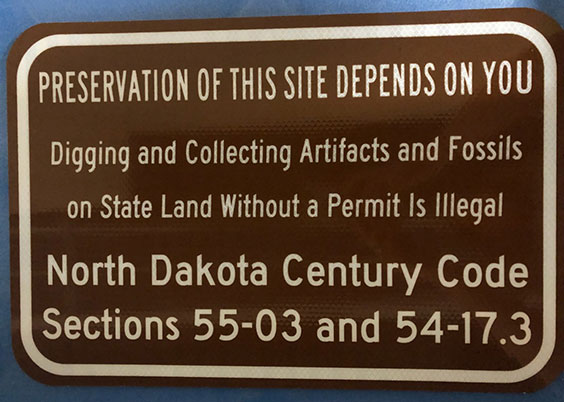 I don’t have the space to go into great detail about the training, but here are a few highlights:

1) I can’t say enough good things about the instructors. They were from Northland Research, Inc., a contract firm in Arizona. The instructors are trained archaeologists and investigators who work in Northland’s Heritage Protection and Emergency Management division. Specializing in cultural resource protection, these are the folks who travel all over the country to investigate crimes relating to archaeological and other cultural resource sites. They record sites, work closely with law enforcement (since a damaged site is also a crime scene), write archaeological damage assessment reports, and act as expert witnesses in courtroom trials. Their slides were of actual work they have done—hardly the mind-numbing Powerpoints I expected!

2) The class was huge (45 people!) and represented nine U.S. states. And it wasn’t just archaeologists. Other students included natural resource specialists, representatives from tribal historic preservation offices, police officers, assistant U.S. attorneys, historic site managers, and park rangers. One of my favorite aspects of the class was hearing other students’ questions; each one spoke to that person’s expertise  and the unique role he or she plays in the investigation of a cultural resource violation.

3) There was a field component (a sure way to make any archaeologist happy!). For one afternoon, the instructors created ten “mock” crime scenes at fabricated archaeological sites near one of our off-site storage facilities. They divided us into teams, each of which had a law enforcement officer as the head investigator. The “site” had holes dug into it and artifacts scattered across it (the artifacts were borrowed from the Archaeology & Historic Preservation Division’s educational collections). We had to use what we had learned in the class to document the damage and collect evidence. I really appreciated the fact that all of the documents we had to create (site map, evidence log, photo log, field notes, etc.) were critiqued after—it helped us to take the exercise seriously and ask a lot of questions about proper protocols. 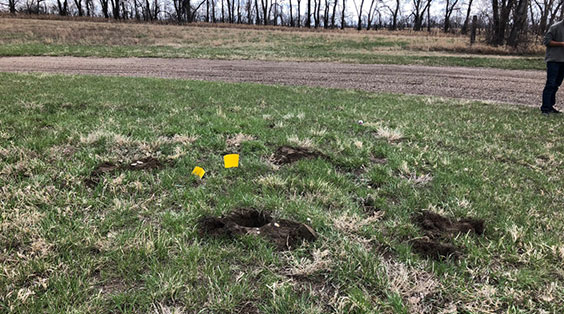 The “staged” crime scene, which included disturbed areas, scattered artifacts, footprints, and modern trash. The yellow flags were placed by our team to mark different pieces of evidence.

4) Forensic sedimentology! Forensic sedimentology is based on the fact that soils in different areas (even very limited areas) are mineralogically and chemically unique. By using X-ray fluorescence and other analysis methods, the mineral and chemical composition of soils from a looted site can be quantified and compared with the particles of soil on the shoes, equipment, and artifacts confiscated from the accused. Scientists can use this evidence to determine with astounding accuracy whether the suspect was actually at the site, or whether the object in question came from that site. The “where” of these cases is important, because different cultural resource protection laws regulate different jurisdictions (i.e., federal land, state land, etc.).

5) We learned how to create a plaster cast of a footprint! The instructors were kind enough to leave multiple bootprints in the soil of each of our test sites so that we could practice. Another important piece of evidence for the prosecution. 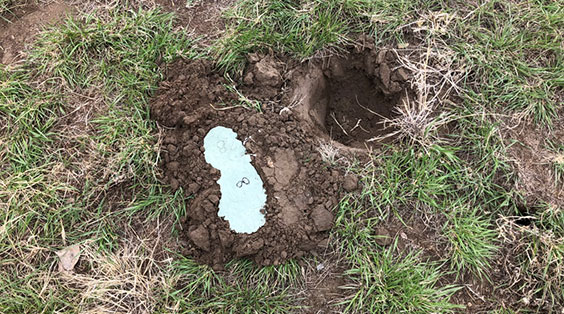 Plaster was poured into footprints in the dirt. After left to dry for about 30 minutes, they could be removed and brought back to the lab for analysis. 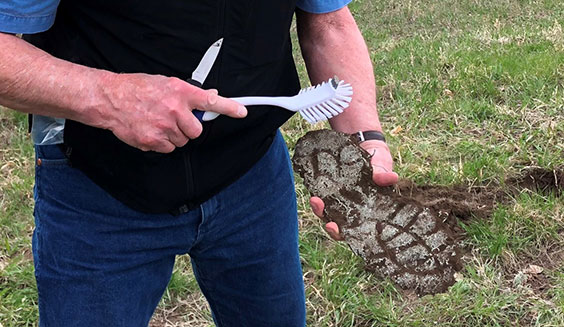 A completed plaster cast of footprints left at the mock crime scene.

6) The participation of the assistant U.S. attorneys was unexpected and really beneficial for the rest of us in the class. They value cultural resources enough to spend three days in this training, and it was important to understand the kind of evidence they need to build a case against potential looters and vandals.

As a collections manager who does most of her archaeological work indoors, it was also important for collections staff to be reminded of their role in these contexts. For example, if confiscated artifacts were ever stored here while a case was pending, we would need to be careful about meticulously documenting chain of custody and restricting access to the artifacts. When people come in with artifacts to donate, it is important for us to know whether they were legally obtained. When someone is assessing the cost of the resource damage, we can provide information on curation requirements and costs. We all have a role to play in protecting these resources, and I welcome any training that helps me do that better.

Many thanks to the U.S. Army Corps-Omaha for hosting the training, and to Martin McAllister, Brent Krober, and David Griffel of Northland Research, Inc., and to all participants for a productive and enlightening three days!