Visitors often ask what my favorite thing about the Former Governors’ Mansion State Historic Site is, and my answer usually draws a look of confusion from them. They’re expecting me to say something grand, like the staircase or the massive pocket doors. My answer is something small, but not insignificant--nails.

I love nails! Nails can tell you so much about when something was built. When I see a square cut iron nail sticking out of a piece of trim, I don’t say, “I need to pound that back in.” I get excited because that nail just verified that the trim was installed before 1895. 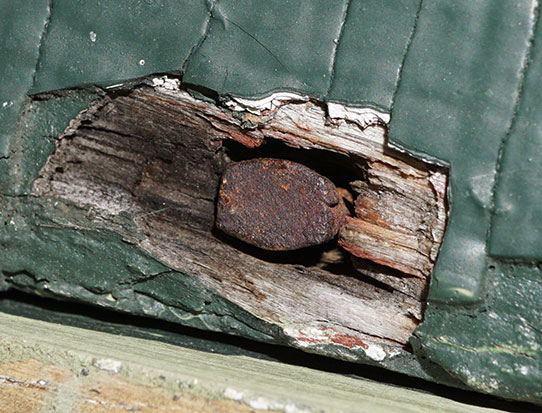 Square cut nail in an exterior door frame that has pushed out over time from seasonal contraction and expansion. Many layers of paint can be identified, with just a hint of the original 1884 brick red color showing. This nail was pounded in more than 130 years ago.

When the mansion was built in 1884, the steel wire nail we know so well today was in its technological infancy, with only about 10% of all nails produced being small steel wire nails. By the early 1890s the steel wire nail had begun to replace the square cut iron nail. By 1895 mass produced stocks of cut nails had been depleted, making it rare to find buildings constructed with them. 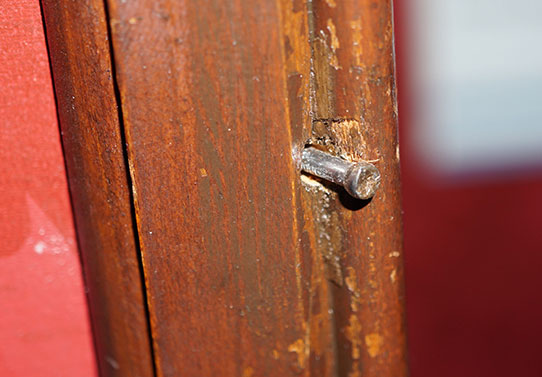 Steel wire nail protruding from an early, but not original trim piece in the parlor of the mansion. The manufacturing tool marks on this nail indicate that it could have been pounded in any time after World War II.

Knowing this little piece of history, I can look at a nail sticking out of a board--be it interior trim, framing wood or siding on the mansion-- and roughly determine when it was installed. Combine that with the type of finishes, thickness of the wood and written/oral histories, and we can nail down approximate dates on mansion remodels.

A great example is the mansion attic playroom’s built-in toy boxes. Oral history suggests that Governor Langer had the attic finished into a playroom in the 1930s for his children. Examination of the toy boxes shows they were built with steel wire nails, and the wood was modern dimension lumber, which became the standard around 1900. These two clues seem to corroborate the 1930s construction date for the toy boxes. But while examining the toy boxes to find out what kind of nails were used, a third clue was found; the signature of Governor White’s young son Edwin.

Governor White was in office from 1901 to 1905, which was a perfect time frame for the use of steel wire nails and modern dimension lumber to be combined in the construction of the toy boxes. Good bet that the toy boxes were built during Governor White’s occupancy of the mansion rather than Governor Langer’s!

Next time you are walking through a historic building, trying to puzzle out when something was remodeled, go find some nails. For something so simple, they can tell you a lot.