When most people think of finding fossils, I bet the image that is conjured in their heads is a lone paleontologist wandering through the badlands, stopping once in a while to examine a fragment of rock or bone. Admittedly this is true in most cases. Some of the techniques used to find and collect fossils in the field are over 100 years old and have changed very little. However, with the advent of new technology comes the testing of new techniques.

Finding a large fossil is one thing. Finding a large fossil and being able to see it from space; well, that is something else entirely. A few years ago a visitor came to the North Dakota Heritage Center with tales of a fossil tree so large you could see it with Google Earth. I will admit that at first I was doubtful, but after very quickly navigating to the location on the computer and seeing photos he had taken from the ground, it did indeed turn out to be a fossil tree. 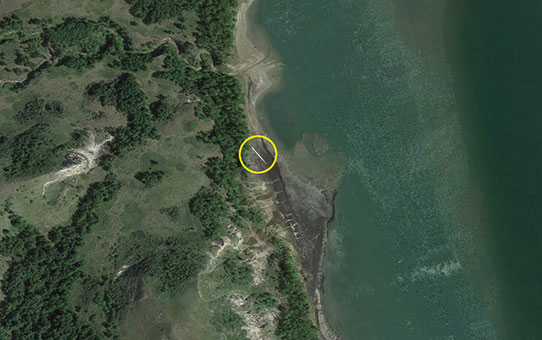 Image captured from Google Earth. The object in the yellow circle is a fossil tree trunk measuring over 100 feet long.

After some quick calculations, we determined the tree to be well over 100 ft. in length. It is broken along its length into 4-6 foot chunks, some of them likely weighing several hundred pounds each.

I study small mammals. Some of the mammals I study are classified as microfossils (fossils smaller than about 1 cm). Some of these microfossil teeth can be less than 1 mm in length! 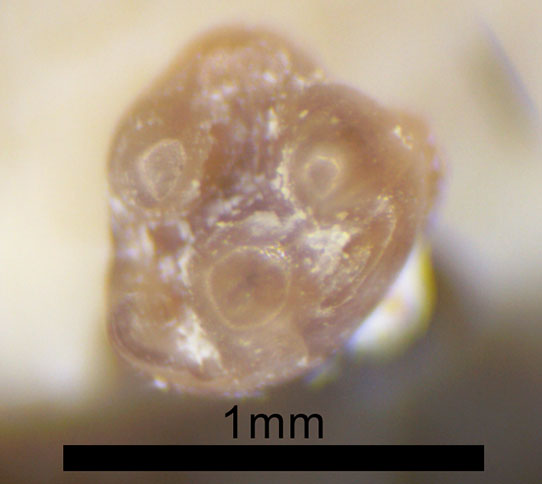 One fossil tooth from the Brule Formation of North Dakota. This image was captured with a microscope camera. The scale bar represents one millimeter in length.

As you can imagine, finding fossils that small is no easy task. Finding these microfossils starts with a process called screenwashing. This process involves washing collected rock and dirt through wooden boxes with brass screen making up the bottom of the box. The screen openings are smaller than the openings found on most window screens. What remains on the screen after the washing process is dried. Normally it is at this point that the dried material would be picked under a microscope looking for fossils. However, we have added an additional step to the process. Some fossils from certain rock formations will glow under the application of ultraviolet light. The Oligocene age Brule Formation found in North Dakota is one such rock layer. The fossil bone from the Brule Formation glows a bright white, and the teeth from the Brule Formation actually glow a bright orange. Fortunately nothing else found in this formation reacts to the ultraviolet light, just the fossils. This makes finding microfossils from the Brule Formation very easy. Before the washed and dried material is picked under a microscope using white light, we spread the material out on a dark surface and use ultraviolet flashlights to find the teeth.

Washed and dried Brule Formation matrix spread out and ready for picking. The left image was captured under normal, white light. The right image is the exact same spot, under ultraviolet light. Note the brightly glowing tooth in the right image. Can you spot that same tooth in the left image?