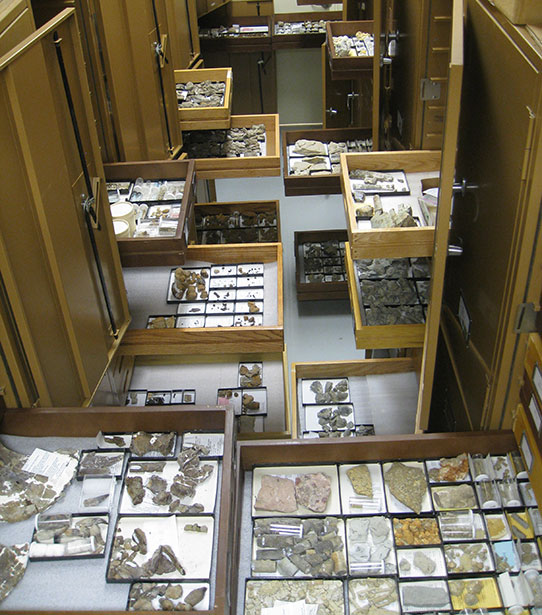 This image shows only a small variety of fossils found in the North Dakota State Fossil Collection.

North Dakota Geological Survey (NDGS) geologists had been picking up fossils during the course of their fieldwork since the inception of the Survey in 1895. Those specimens were typically incorporated into the geology department collection. Prior to 1981, the only fossil collections in North Dakota were teaching and research collections at the universities made by faculty, students, and amateur collectors. However, in 1981 Dr. John Hoganson was hired by the NDGS. At that time the NDGS began what is now referred to as the Fossil Resource Management Program, and the recovery of fossils by the NDGS began in earnest. Although not yet officially the “State Fossil Collection,” between 1981 and 1989 North Dakota’s “fossil collection” grew to a small accumulation (a few hundred specimens) of fossil vertebrates and invertebrates. When the main office of the Geological Survey was moved from Grand Forks to Bismarck in 1989, this small collection only required a few cabinets for storage space.

Over the last 20 years, the State Fossil Collection has grown exponentially and now contains approximately 6,100 cataloged specimens (with more being added all the time) and 3,800 fossil localities. It is difficult to give even a rough estimate of how many cataloged and uncataloged specimens are in the State Fossil Collection at this time. The collection now contains plant, invertebrate and vertebrate fossils, and also contains a large rock and mineral collection. After nearly 10 years in the Johnsrud Paleontology Laboratory under the auditorium, it was obvious that we had again outgrown our space. In 2009 the state legislators saw the need to expand the North Dakota Heritage Center and signed a bill allocating money to put a new addition on the current building. Over the years the collection has moved from Grand Forks to Bismarck, and then within Bismarck it has moved twice. With each move the storage space for collections has nearly tripled in size (fig. 2).

Although the state collection is very young (some of the older collections in the United States have been around for more than 100 years), we have a very important representation of Cretaceous, Paleocene, and Oligocene fossils not found in very many other museums across the country. This is something we are trying to expand on during every field season. Although many don’t know it, as you walk through the new Adaptation Gallery: Geologic Time, there are great riches just below your feet.