In a quiet corner of Walhalla, tucked among some trees on the south end of town just beyond the local Lutheran church, sits an old log cabin. This structure, known as the Kittson cabin, is about 170 years old, and it looks like it. The walls are slouching outwards, the roof is sagging, and the front door is so bowed it appears it may be the only thing still holding the cabin up. Thankfully, the site will soon become louder as workers begin the process of dismantling the cabin to examine the logs and reclaim what they can in preparation for its reconstruction next year. 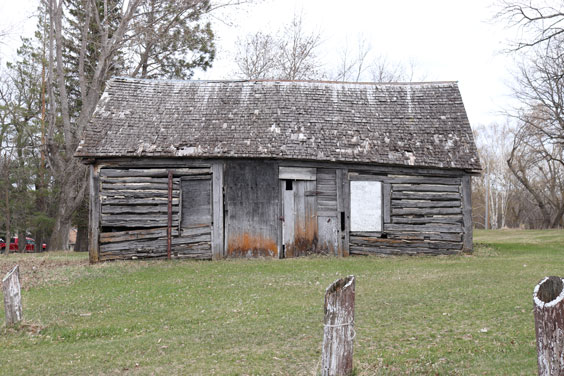 The Kittson cabin will soon be restored to a like-new state while preserving as much of the original material as possible.

A lot has been happening at the state’s historic sites in Walhalla the past few years, though it may not seem like it at first glance. At the Gingras Trading Post State Historic Site and now at the Walhalla State Historic Site, where the aforementioned Kittson cabin stands, restoration work has been progressing steadily. Several rotten logs and the roof shakes at the Gingras Trading Post were replaced in 2020. The following year the Gingras house had its roof replaced with fresh cedar shingles. In early September work began to replace the timber siding and windowsills of the house. The next step in the long process of restoring these sites is the dismantling, examination, and reconstruction of the Kittson cabin, which is set to begin in the coming weeks. 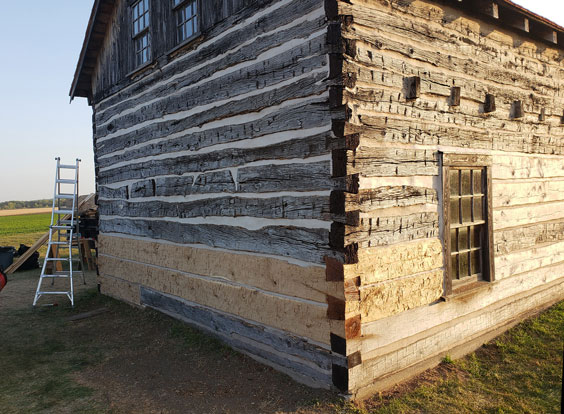 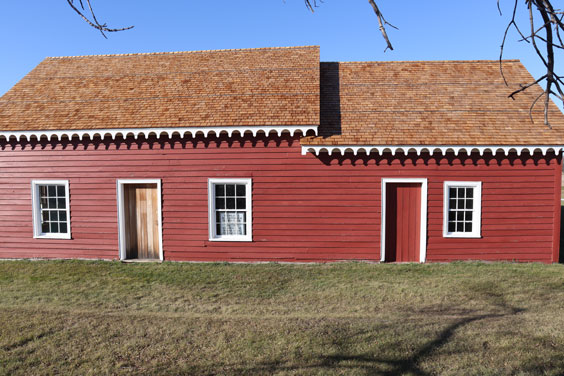 The Gingras house with a new set of cedar shingles after their installation in late 2021. A year later, the shingles have weathered to a light gray color and look as if they have always been there. 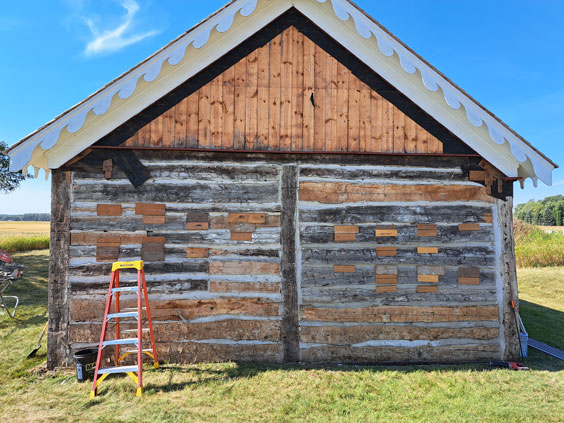 Kobiela Brothers Construction is at work restoring rotten and weather-damaged wooden siding on the Gingras house. With the siding removed, the tenon-and-groove log construction elements are visible. Observe the newer looking logs from the 1974 reconstruction. The siding has done its job in preserving the covered material.

But what makes these cabins so important compared to others in the area? These cabins are among the last remaining buildings from the fur trade era in northeastern North Dakota representative of Red River Frame, a construction style unique to this region. Only four of these buildings still exist. They are the Kittson cabin, soon to be rebuilt, the Gingras Trading Post and house, and the Dease-Martineau House. All of these buildings can be found in Pembina County, located just a few miles from each other.

Red River Frame style is a synthesis of different architectural elements developed by the Métis, a culture born from the descendants of fur traders and their Native wives. Author and archaeologist David Burley, who has studied the origins and expressions of Métis culture in depth, noted in a 2000 Historical Archaeology article that “the ethnogenesis of Métis peoples ... involved a creolizing process in which cultural traits from many different groups were adopted. An analysis of Métis vernacular log architecture ... illustrates this clearly with individual building components derived from a number of different sources.”

Immediately noticeable about this style is that the exterior is built to maintain a level of symmetry. This element is taken from Georgian architecture, which was popular from 1714 to 1830, during the reigns of the British Kings George I, George II, George III, and George IV. 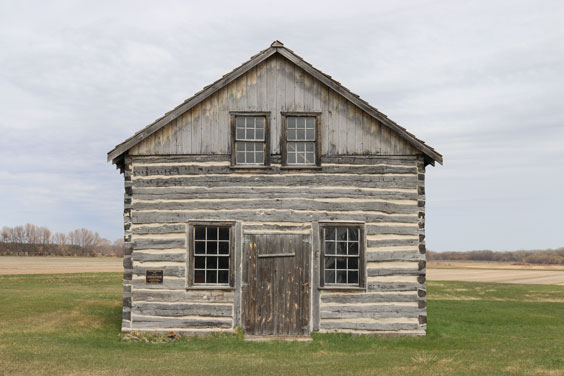 The side of the Gingras Trading Post that leads into the storage area displays characteristic Georgian symmetry.

Underneath the Georgian facade, Red River Frame combines elements of different log cabin construction, including both dovetailed corners and tenon-and-groove assembly around windows and doors. The French called these styles pièce-sur-pièce and pièce-sur-sole, respectively. French influences are strong in Métis culture, and their architecture is no exception. 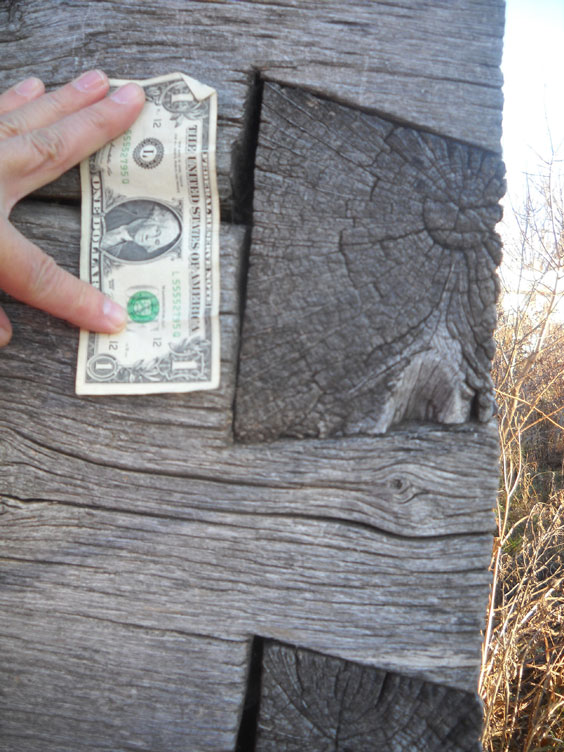 At the corners of the Dease-Martineau House, you can see how the dovetailed notches of the pièce-sur-pièce style are slanted in two directions, which prevents the logs from slipping in any direction but toward each other, effectively locking the structure together and ensuring its stability. The dollar is included for scale purposes. Courtesy Steve Martens

Another unique characteristic of this style is found in the way windows, doors, and additions are made to fit Red River Frame buildings. Upright beams are attached to horizontal logs with the use of wooden pegs or are set directly into the earth. Slots are cut along the length of the upright beams. Tenons are cut into the ends of the horizontal logs, which are fitted into these slots. This feature is adapted from the pièce-sure-sole style, which had the benefit of allowing buildings to be constructed with few, if any, iron nails. Such buildings could also be disassembled and reassembled with relative ease, much like the Métis’ other famous wooden construction: the Red River ox cart. 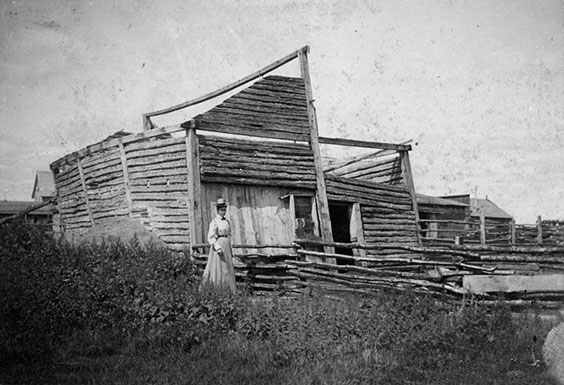 This circa 1890 image of the Kittson Trading Post, then located in central Walhalla, shows the upright beams with horizontal logs stacked in between. Each of these horizontal logs has a narrow tenon that is fitted into the uprights. The Kittson cabin stands behind and to the right of the fallen structure in the foreground. SHSND SA C1602-00001

This amalgam of different construction methods developed in the 19th century along the Red River of the North is found nowhere else in the United States, which makes the preservation of these cabins important to local, regional, and state heritage. As such, the restoration process will be meticulous. Every piece of wood and every detail of the design will be recorded as the work progresses. When the Gingras site was restored in 1974, the buildings were first disassembled, and each design aspect as well as the state of the existing material was recorded. Then, new material was acquired, and the building was reassembled on the original location. 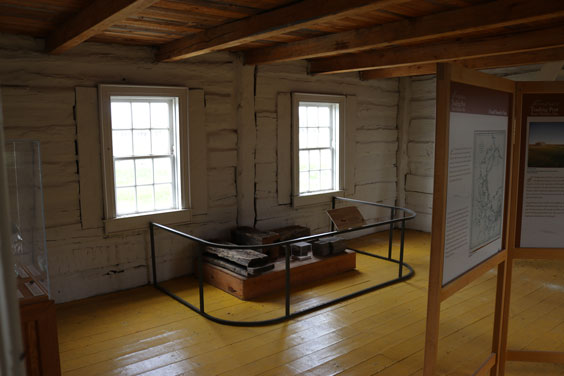 In this interior view of the Gingras house, the walls display the same tenon-and-groove construction as the Kittson Trading Post. Notice the original logs on display from the 1974 restoration of the house. 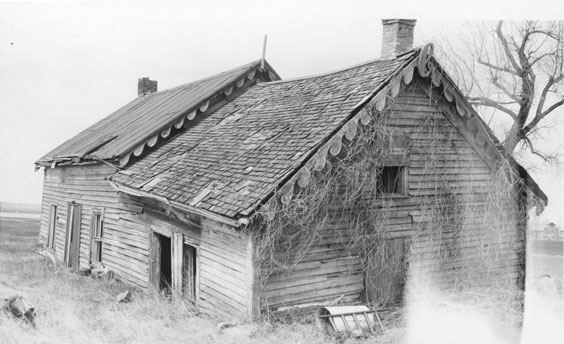 The same careful process will begin this month at Walhalla State Historic Site, where the Kittson cabin will soon be disassembled and its parts put into storage. The site will stand empty for the winter as the old material is assessed and salvaged and new materials are acquired. In spring 2023, the cabin will be reassembled at the same location with new materials to replace whatever cannot be recovered. Kobiela Brothers, the contractors responsible for the restoration, expect the project to be completed by the end of June 2023. When the dust of construction settles, a cabin that is 170 years old will have been preserved for another century so that people can study and enjoy this unique piece of history.