One of the most important artifact types found in archaeological sites are ground stone tools. These include tools such as stone axes, manos, metates, pestles, abraders, figurines, and hammerstones. Most ground stone artifacts were created by pecking, grinding, and polishing. Additionally, drilling was used to create holes in scarcer ground stone artifacts such as smoking pipes, stone gorgets, and stone pendants. In contrast, artifacts like manos, metates, and hammerstones could be selected from natural cobbles and slabs and used with little or no modifications. While manos, metate, mortars, and pestles are often used to process substances (e.g., plant and animal products, pigments, clay, and tempers), hammerstone, abraders, and polishers are mainly used to manufacture and shape tools (Adams 2014; Morrow 2016).

Stone hammerheads, called grooved mauls, are common ground stone artifacts found in North Dakota. Grooved mauls are hafted percussion tools, and the maul head represents the stone part of the tool. In July 2021, a landowner donated a uniquely shaped grooved maul to the State Historical Society’s Archaeology and Historic Preservation Department. This grooved maul measures 8.6 inches (22 cm) in length, 10.6 inches (27 cm) at its widest circumference, and weighs 7 pounds (3.2 kg). According to the donor, the maul head was found in Stutsman County, south of Plow Lake.

The longitudinally arranged channels, or flutes, pecked into the surface of the maul and extending from the handle groove to the working end make this one of the most unique mauls ever found in North Dakota. The handle groove goes almost all the way around the maul. The parallel flutes are common to grooved axes, and they are less likely to occur with grooved mauls. 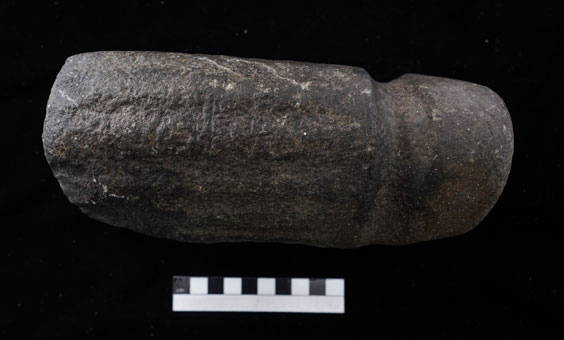 Grooved mauls were essentially the sledgehammers of their day; they could be used for any activity requiring impact force (Adams 2002; Morrow 2016, 324). They were used for food preparation tasks, including breaking bison bones to extract marrow, as well as pounding dried meats and chokecherries (Fedyniak and Giering 2016). Additionally, they could be used for hammering stakes into the ground, driving wedges through wood, and even killing small animals (Adams 2014). According to Highsmith (1985, 69), the rarity of fluted ground stone artifacts may suggest their special function in a non-utilitarian context. Fedyniak and Giering (2016, 77) have described the use of stone mauls in healing ceremonies. Experimental studies and use-wear analyses can provide insights regarding the possible functions of grooved mauls. 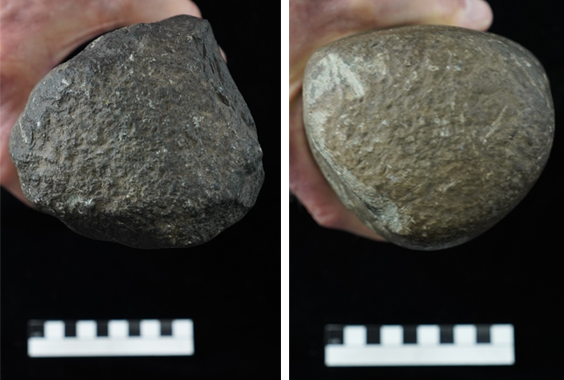 Distal, left, and proximal ends of the grooved maul. Evidence of use-wear is more visible in the working, battered distal end of the maul head. SHSND AHP Educational Collection

Moreover, grooved mauls could be used/reused for a longer time—hundreds and possibly thousands of years—and this makes it difficult to accurately date them (Fedyniak and Giering 2016). In the case of the maul head from Stutsman County, we do not know its archaeological context. In general, grooved mauls appear to be associated with the later part of the Native American occupation of North Dakota, but they could be also found in the earliest time periods; a temporal range of Early Woodland to Historic times seems most likely (Deaver, Deaver, and Bergstrom 1989; Morrow 2016, 324). For example, a grooved maul recovered from the Bull Ring site (32ME166) may date back to the Early Plains Woodland Tradition (circa 400 B.C. to 100 B.C. in North Dakota). On the other hand, South Cannonball (32SI19) grooved mauls temporally may represent the Extended Middle Missouri Plains Village occupation, dating roughly from A.D. 1200 to 1400 (Griffin 1984, 95; Johnson 2007). Grooved mauls were recovered from controlled excavations at the South Cannonball site, where 15 massive grooved mauls were found (Griffin 1984, 59). The presence of a large number of grooved mauls in the northern Plains may indicate the importance of this artifact in the day-to-day activities of the Native people. 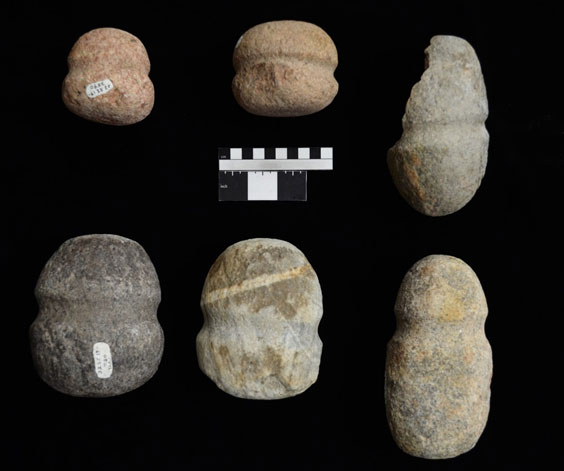 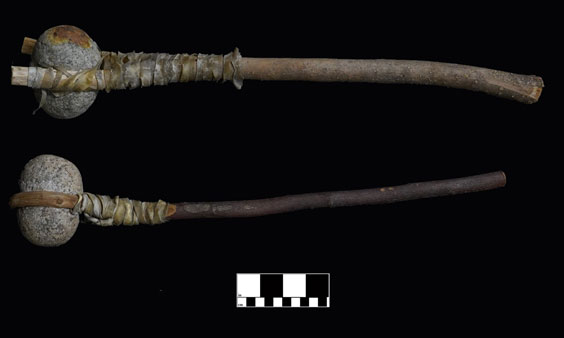 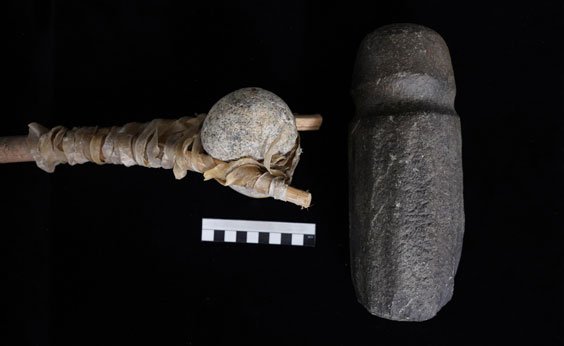 Size comparison of the grooved maul head from Stutsman County, right, with one of the replicas. SHSND AHP Educational Collection