Since Halloween is just around the corner, I thought I’d share three mysterious—and a little bit creepy folktales that have been shared about the Former Governors' Mansion State Historic Site, which housed 20 chief executives between 1893 and 1960. Folktales are one of those things that both confound and delight historic house interpreters when their visitors engage them with a statement or question that they believe with all their heart to be true.

1. Buried in the basement?
Having a group of 4th graders ask you “Who was the little girl who is buried in the mansion basement?” can be rather off-putting the first time it is asked, but having multiple groups of 4th graders from different schools, and over the course of years, ask is downright confounding. The easy answer is to tell them the truth – no one is buried in the basement, and then we move on. The harder part is to research and find the source, and give the next group of children asking the question a historically accurate answer.

A little research into the deaths of governors’ children turns up the most likely explanation of how this question formed. Governor Briggs’ daughter Estella died of tuberculosis on his inauguration day in 1898. She is definitely not buried in the basement, but in Howard Lake, Minnesota. After I started explaining to the groups what the basis of this folklore likely was, the question of the little girl buried in the basement stopped being asked after a couple years. Sometimes the truth isn’t as engaging as a juicy rumor, but we try to interpret history as accurately as possible.

2. Murder at the Mansion?
Last spring a new bit of folklore popped up at the mansion. A number of children starting asking about how many governors had been killed while living in the mansion. The answer was, of course, none. Two governors died while in office, but murder was not the culprit.

I asked one young boy where he heard that. Like most folklore stories, he heard it from a friend who heard it from a friend. After pondering this for a while it occurred to me that I was the likely source of the tale. In fall of 2016 Marilyn Snyder with the Bismarck Historical Society supplied me with a copy of the Bismarck Police Log from May 9, 1927, which described a “shooting” at the mansion. Certainly an interesting historical tidbit, and it solved a riddle about what appeared to be a bullet hole in an inner pane of glass in the south parlor of the mansion. How did the story go from being an obscure historical tidbit to becoming folklore? I shared the police record on Facebook. Not long after, friends were telling friends about the murder in the mansion. It will be interesting to see how long this bit of folklore stays around. 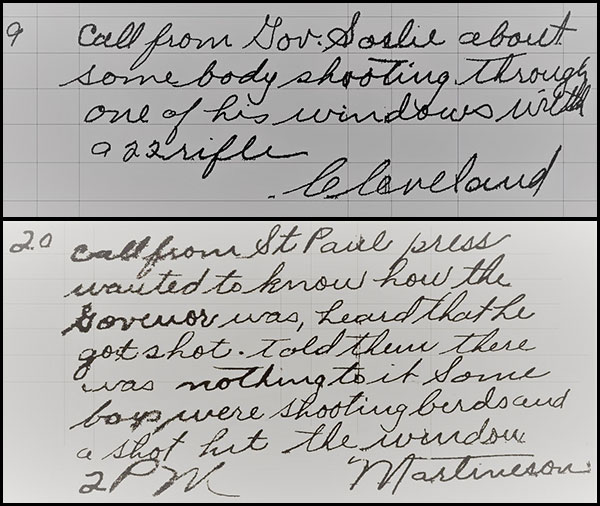 3. Paranormal activity in the parlor?
A variety of ghost stories and paranormal activities are commonly talked about by visitors at the mansion. Quite a few historic homes have similar stories. From curtains moving to footsteps on the stairs to doors mysteriously closing by themselves, these mansion stories have been publicized locally and on national websites. Over the years numerous paranormal groups have tested the mansion for paranormal activity at night and for the most part all have found nothing, except for one group that detected an electromagnetic signature that traveled at a slow walking pace back and forth from the piano in the parlor to the back entry. Searching in the basement turned up no plumbing, electrical lines, or other item that could produce such a phenomenon, and later attempts to locate it all failed.

There are of course, many additional folktales concerning the mansion--some come up on a regular basis, and some only get mentioned during a certain spooky holiday. Most of the stories have some basis in fact, but that fact is often less intriguing than the folktale. Whether true or not, these types of myths and folklore help spark curiosity and create interesting research and learning opportunities for both the visitor and for me.