When visitors come to one of our museums or interpretive centers, the exhibits on display are the end product of a long process. Depending on the size and complexity of the exhibit, it may take months or years and involve just a few or dozens of people. But all exhibits start with an idea, a concept, a whisper of possibility, and often with the phrase, “Wouldn’t it be cool if we could…”. Here are just a few of the places where we find exhibit inspiration.

Collections
Objects are continually being accepted into the collections of the State Historical Society. Sometimes there are a large number of related items from a single donor that can form the basis of an exhibit. A 2002 donation of more than 60 objects related to horticulturist Oscar H. Will became the basis for How Does Your Garden Grow?, our award-winning exhibit. Similarly, related objects can slowly come into the collection over years. Going on display this spring at the Pembina State Museum is The Art of Einar Olstad; SHSND acquired its first Olstad original painting in 1943 and its most recent in 2006. 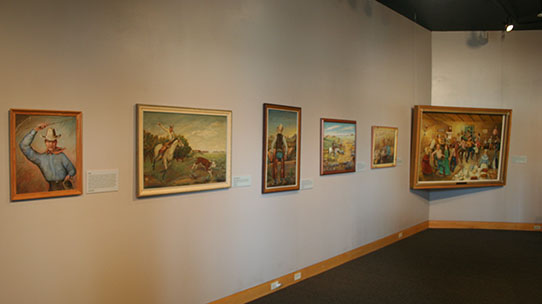 Commemorations
The passage of time does not always give an object or occurrence more significance, but marking the anniversary of certain events can be an important way to encourage remembrance and reflection. We currently have two exhibits in planning that were prompted by upcoming anniversaries. In 2016 we’ll celebrate the 50th anniversary of the National Historic Preservation Act, and in 2017, along with museums nationwide, will commemorate the centennial of the United States entry into World War I.

Site Specific
Many of the historic sites managed by the State Historical Society feature exhibits. Each site has a unique and rich history which can be tapped to create new exhibits. Topics have been as varied as Buffalo Soldiers, the Cold War, and 19th-century French aristocracy.

Inspiration has also come from visitor feedback. There are a few perennial favorite topics, including quilts, immigrant culture, and Native American art.

What has been your favorite exhibit or what would you like to see?