In the Chinese calendar, this is the Year of the Monkey. If Paleontology had a calendar, it would be the Year of the Plesiosaur! Northeastern North Dakota is well known for its underwater fauna. Mosasaurs (giant marine reptiles) swam alongside Archelon (giant sea turtles), Hesperornis (flightless birds), as well as plenty of fish and squid. Another type of marine reptile lived here that many people identify with the Loch Ness Monster (Nessie) – a plesiosaur.

Brief science lesson: plesiosaurs are a group of marine reptiles that contain a number of divisions. One group, the Pliosauroidea, had large heads and short necks. The other group, Plesiosauroidea, in general had small heads and long necks. Prior to their descriptions in 1824, they were grouped together with other marine reptiles, and sometimes even fish. Since then many shapes and sizes have been found – but few from North Dakota.

As of 2015, the State Fossil Collection had two elasmosaurid (reaaaallly long neck) vertebrae. One is on display in the Adaptation Gallery: Geologic Time of the North Dakota Heritage Center, and the other is on display in Icelandic State Park. During the National Fossil Day event last October, a private citizen turned in another vertebra found south of Bismarck. In spring 2016, paleontologists Clint Boyd and Jeff Person made a road trip down to the Pioneer Trails Regional Museum in Bowman. Behold – more! Not just one vertebra, but 15 articulated neck bones, plus bits of a partial skeleton! Then, icing on the cake – During our Pembina Gorge dig, a local brought in some bones to have them identified – yet another plesiosaur vertebra, this time from the body. The creatures were coming out of the woodwork from all across the state – it was amazing. 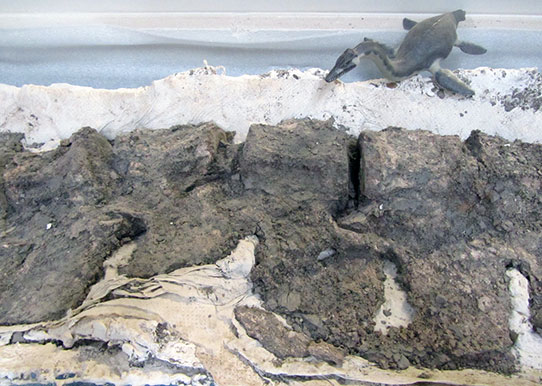 Vertebrae from the articulated neck of a plesiosaur. Fifteen were collected; one neck had around 70 vertebrae.

The next steps will be to fully prepare the material found, and then identify who it belongs to. Saying “plesiosaur” is like saying “dog.” It’s a general term that gets a basic body shape in mind (notice the lower-case letter and non-italics). What we want to know are the specifics. Saying “Elasmosaurus” or “Styxosaurus” would be like saying German Shepherd and Scottish Terrier – a narrower description (also uppercase first letter and italics).

It is important to note – plesiosaurs are not dinosaurs. They are marine reptiles. For example, if we take a dog (land mammal), and a dolphin (water mammal) – both are mammals, both can coexist, but they are not closely related. It is the same with a plesiosaur (water reptile), and a dinosaur (land reptile).