How I became the ND Heritage Center’s “Lucky Man”

The year 2015 was career changing for me. My wife spotted a want ad for a person needed to work weekends at the visitor information desk of the North Dakota Heritage Center & State Museum. As a native North Dakotan, I thought a job at the state’s primary museum sounded appealing and applied. It wasn’t long before I was invited for an interview and met with Beth Campbell, visitor services coordinator, and then-Event Coordinator Toni Reinbold. After the required interview questions, we had a nice get-to-know-you chat. I liked them and the place right away. 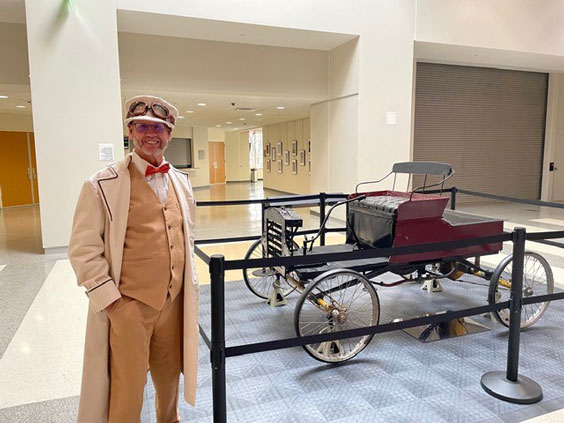 Who wouldn’t love a job where you get to wear snazzy threads like these to work?

A couple weeks later I started the new job. Any free time at work I spent going through the galleries, trying to learn as much as I could to help our guests. One of the things I was excited about was meeting people from all walks of life as well as from different parts of the country and world. One minute I would be talking with a family from Washburn, then a couple of minutes later I’d be chatting with a family from China. I realized I was learning just as much as I was sharing. Right when you think you know a subject, you meet a visitor with a whole different perspective that you hadn’t considered.

At first, Saturdays and Sundays I was behind the information desk from 10 a.m. to 5 p.m. This was a nice change from my weekday work. I did this for about two years, getting to know my fellow agency employees, including the security officers who one day told me they were looking for someone to work in the control room during the weekend overnight shift. I’m motivated by “fun,” and this sounded like it fit the bill!

Only a short time later I was in the “cage,” one of the affectionate terms used to refer to the control room. Besides watching the ND Heritage Center & State Museum, I also kept an eye on historic sites around the state. 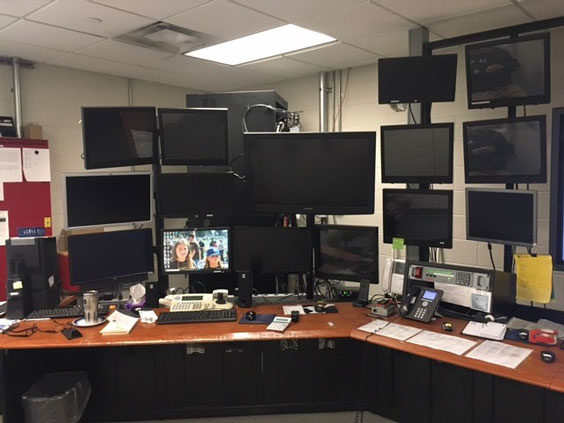 One of the places I’ve worked in the agency is the security control room or “cage,” as it is affectionately known.

I enjoyed the work, and I was learning about the agency from the inside out. When an alarm would ring at one of our statewide historic sites, I would call the site manager to check out the issue and found it exciting to be helping protect all of our museums and historic sites from my chair in a Bismarck control room. You might even say (tongue firmly in cheek) that I was the North Dakota version of Agatha Christie’s famous Belgian detective Hercule Poirot! Ha. But I digress.

Though I loved the work, my old man body could not maintain that pace more than a year. As chance would have it, around that time, Erik Holland, our curator of education, was looking for a State Museum gallery guide. I inquired about the position and was hired.

The gallery guide position is my main job at the moment, but I still help at the visitor information desk during the week as needed. For the past two years as part of my work I’ve been delivering pop-up history programs to visitors—researching and delivering short talks on topics related to the exhibits at the ND Heritage Center & State Museum. My programs aim to give visitors a peek into different eras or historical events. As a Grand Forks native, I enjoy talking about the Nickel Trophy and its relationship to the historical rivalry between the University of North Dakota and North Dakota State University football teams.

Recently I’ve added yet another aspect to my job. Last year we opened our newest exhibition in the Governors Gallery, Fashion & Function: North Dakota Style. After seeing the wonderful displays, I thought to myself, “Wouldn’t it be fun to have a live model walking the galleries in different period costumes?” I mentioned this to Erik, and he looked at me and said, “Hmm, who can we get to do that?” Turns out it was me. Soon after, we got in contact with local costumer Michele Renner to dress me in historically correct outfits. Looking like I just stepped out of a bandbox in the Fashion & Function: North Dakota Style exhibition at the State Museum.

Within a couple months, some pretty impressive attire began to arrive. One of the first outfits depicted a gentleman from around 1804, about the time Lewis and Clark were headed this way on their famous expedition.

Other period clothing pieces I’ve had the pleasure of “modeling” have included a Hudson’s Bay capote coat—something a hunter/trapper would have worn in the 1800s, an early 1900s motoring outfit, and a 1950s suit. But hands down my favorites are from the 1970s. You haven’t lived until you’ve seen me in a baby blue leisure suit!

I invite you to come check out my different outfits. Swing by the State Museum on Tuesdays and Thursdays from about 10 a.m. to 2 p.m. when I appear in costume. I get a kick out of visitors’ reactions. Their responses sometimes include a double take but always feature a lot of really good questions. 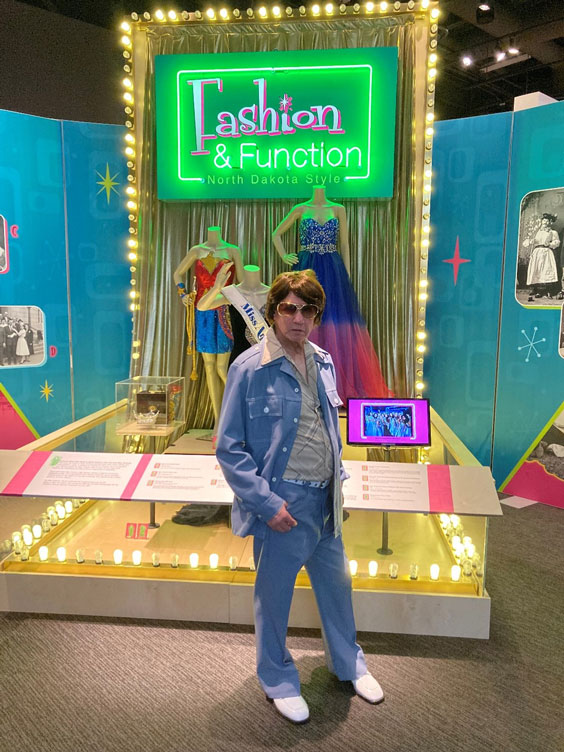 For a groovy time, come on over to the State Museum and say hello.

In the 1970s, the rock band Emerson, Lake & Palmer had a super hit called “Lucky Man.” The song resonates since I feel it could have been written about me. I’m that lucky man to be able to do this work.

Next time you are at the ND Heritage Center, stop and say “hi.” I won’t sing, but we can take a look at some fascinating exhibits that tell the story of our great state.

March is Women’s History Month. What better way to celebrate than to explore the State Archives’ collections on the prominent women connected to North Dakota. These collections include journalists, pioneer settlers, and trailblazers in the political history of the state, as well as the records of organizations devoted to women. All make the State Archives a great resource for researching women’s history, especially for students considering a possible National History Day project.

One of the eminent women with North Dakota ties who has a collection of materials housed in the Archives is Era Bell Thompson. Thompson grew up in Driscoll, where her family was the only African American family in the small community. She attended the University of North Dakota and Morningside College in Iowa, later becoming an editor at Ebony, the magazine devoted to Black culture and issues. 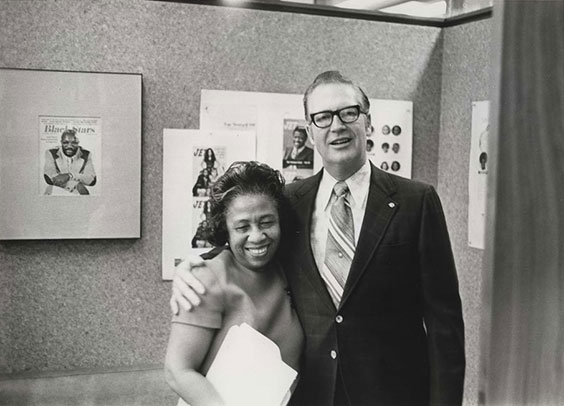 The Era Bell Thompson Papers (MSS 11118) at the Archives contain one foot of material related to Thompson’s life and work. Correspondence, family-related materials, some photographs, as well as tribute items, clippings, and published articles showcase a life well lived. Among her accolades, she received the Theodore Roosevelt Rough Rider Award in 1976.

Another great resource for women’s history is the Alice Kennedy Dahners Papers (MSS 11083). This collection was Dahners’ contribution to the North Dakota Federation of Women’s Clubs Pioneer Mother Biographies project. The project chronicled the stories of married women who lived in North Dakota prior to 1889 through handwritten or typed biographies. This material enriches our understanding of women’s lives during the territorial and early statehood period as well as the struggles these pioneers faced.

Women who have participated in the North Dakota political scene are also represented in the Archives’ holdings. One example is the Nielson Family Papers (MSS 10107), which contain the papers of Minnie J. Nielson, who served as state superintendent of public instruction from 1919-1927. Nielson’s election to that office was remarkable, given that she was the only candidate not supported by the Nonpartisan League (NPL) to win when the NPL swept all other statewide elections in 1918. Her rise to the position is significant because it came at a time when women were mostly shut out from positions of leadership in American politics. 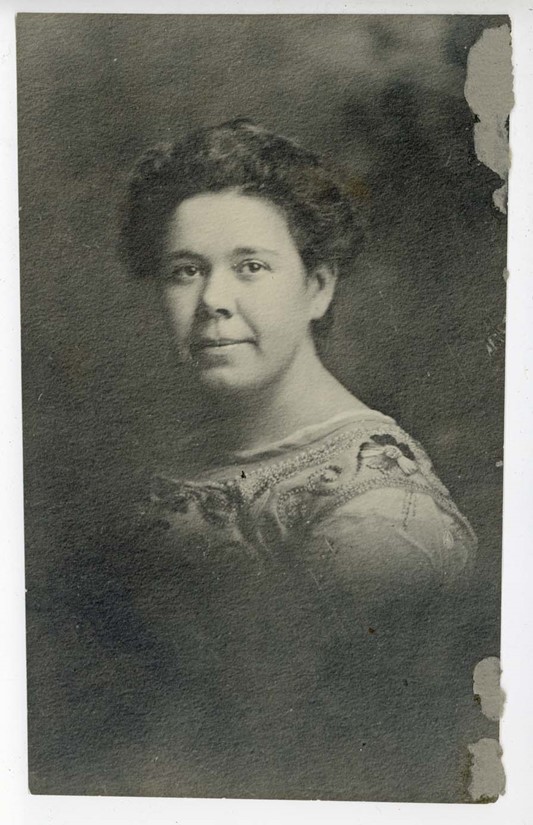 Minnie and her sister, Hazel, were both involved in their community, serving with the North Dakota Department of Public Instruction, as well as being active in several organizations, including the American Legion Auxiliary, the North Dakota Federation of Women’s Clubs, and Delta Kappa Gamma, a society for women educators. The collection contains materials related to Minnie’s service with the Public Instruction Department and her later work with the Teachers’ Insurance and Retirement Fund, which also makes it a great resource for people researching education in North Dakota.

Organizations for women are another important focus of our collections. Researchers can access several organizational record collections in our holdings on women’s groups. One of these is the Women’s Christian Temperance Union of North Dakota Records (MSS 10133). The Women’s Christian Temperance Union (WCTU) is a major organization devoted to abstinence from alcohol and was one of the groups involved in the passage of the 18th Amendment, which ushered in Prohibition in the United States.

The WCTU collection includes records related to annual conventions, local chapters, promotional materials, scrapbooks, audiovisual materials, and other items pertaining to its activities in North Dakota. One item in the collection, shown below, is an August 12, 1892, letter written by Frances Willard, national president of the WCTU. In the letter, penned shortly after the death of her mother, Mary, Willard expresses her gratitude to members for the assistance they provided during a difficult time. 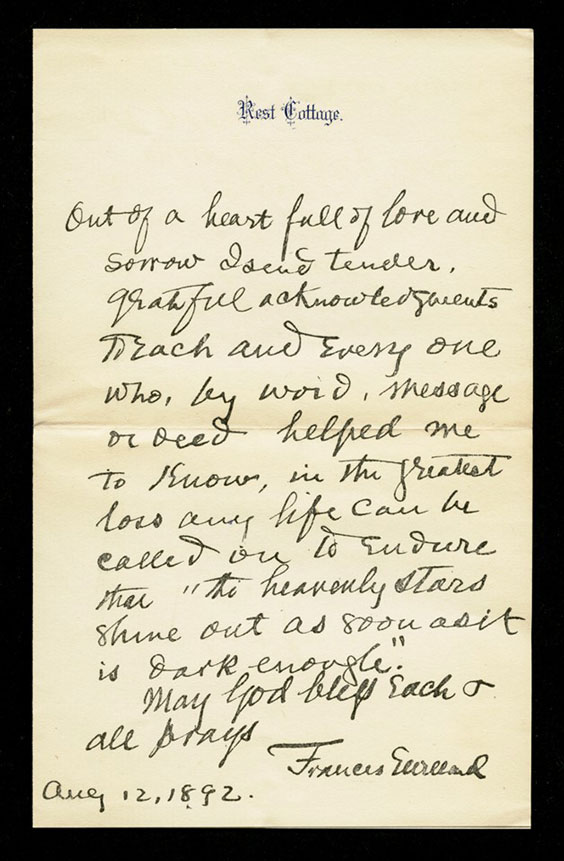 As you can see, all of these diverse collections are wonderful resources for learning about and researching women’s history in the State Archives. If you are a student, or know a student interested in women’s history and looking for a National History Day project, consider having them check out our holdings and drop by to do some research. With Women’s History Month upon us, let us use this time to reflect on the contributions women have made to the history of our state and nation.