At this time of year, I often get asked about what I do since the majority of the state historic sites I oversee are closed. One of the best parts of working with sites is that no two days are ever the same. I know that sounds a bit cliché, but there is a lot of truth in the statement. During the offseason, I find myself working on various projects for different sites. Each project offers new and unique challenges and allows me to work with our excellent site staff.

One of the projects nearing completion is an upgrade to the playground equipment at Writing Rock State Historic Site, which we undertook in partnership with the Divide County Job Development Authority. You might wonder why we have a playground at a historic site. The playground equipment was installed at the site when it was initially created as a state park in 1936. The State Historical Society of North Dakota operated both state parks and historic sites until the mid-1960s when parks were moved to a separate agency.

The original equipment at Writing Rock was outdated and no longer safe to use. Playground equipment has a lifespan of 20 years. Grondahl Construction installed the new equipment in November. All I have left to do on the project is finish up some grant reporting and install a sign recognizing the contributions of all involved. I have never worked on a project like this before, and it allowed for some great learning opportunities. Plus, I can now amaze my friends with my knowledge of the cost of playground equipment.

Another project on my plate this offseason is writing interpretive panels for Fort Dilts State Historic Site. Fort Dilts has long been on our list of sites that need interpretive panels. After its inclusion in the North Dakota Passport, we felt it was time to move it to the top of the list. For the past month, I have been researching the history surrounding the site and have begun to write the panels. 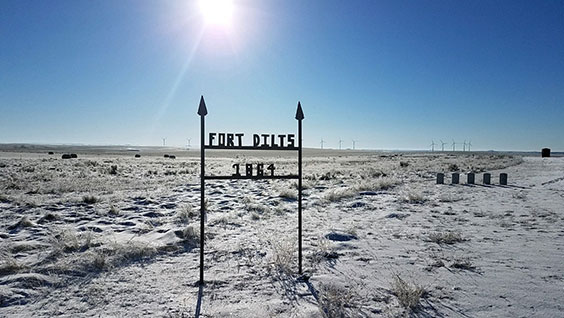 One project that has been on my list for a long time is creating a video tour of the upstairs of the Chateau de Morès in Medora. Currently, guests who cannot climb the interior staircase have no way of experiencing the Chateau’s upstairs. This past fall, Assistant Site Supervisor Ed Sahlstrom and I recorded a tour of the upstairs. I am currently editing the video, and hopefully, it will be available at the site this summer for guests. 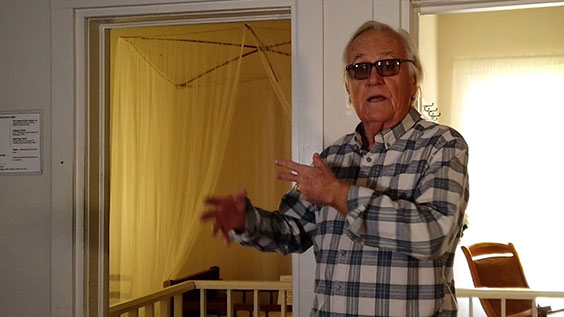 If you are a regular blog reader, you may have seen my post about the Ask-an-Expert program. We continue to work on that program, but we are also expanding our virtual offerings in other ways. We are working with several of our sites to develop virtual tours. We are doing test tours and looking at lighting and sound quality. We are also trying to work with our site staff to make the tour fit within a 45-minute time limit. I am excited for our site staff to share these tours with schools, civics groups, and other museums. 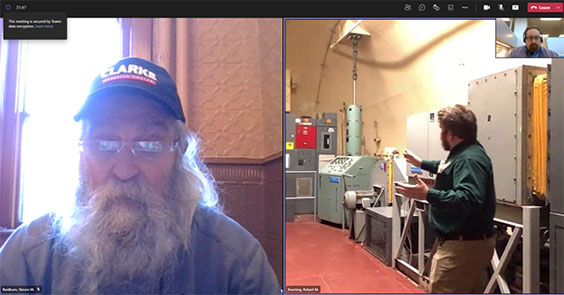 In addition to offseason projects, I often help answer questions for the general public about sites. Sometimes these questions require research. For example, a gentleman from the Twin Cities recently contacted me with questions about sites related to the 1863 punitive campaign led by Brig. Gen. Henry H. Sibley against the Dakota for the 1862 uprising. He wanted to know the exact location of several of the campsites. Thanks to some help from the friendly folks up in the State Archives, I was able to answer his questions. 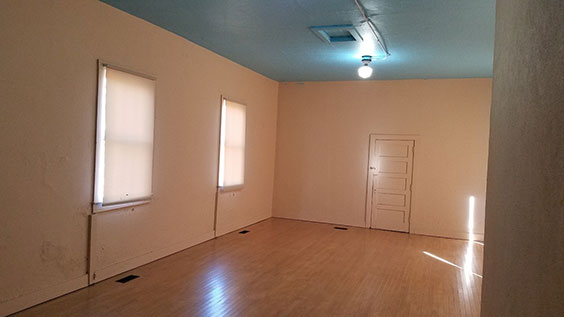 The north wing of the hospital building at Fort Totten State Historic Site will eventually house a hands-on exhibition geared toward children.

The projects listed above are a small taste of all of the ones I am currently working on this winter. I could go on about other projects like the children’s exhibit for the north wing of the hospital building at Fort Totten State Historic Site, getting replacement signs made for various historic sites, or making some slight updates to site cards. Then there are all of the other responsibilities that come with being a manager—budgeting, staff development, and hiring. As much as others might think that winter is my quiet time, it can be one of the busiest times of the year. But that said, I enjoy working on all of these projects, making every day different and enjoyable.

A Capone in North Dakota

I love stories about the Depression-era gangsters, bootleggers, and crime bosses of Chicago and New York City, but they are rarely something I get to research at the State Historical Society of North Dakota.

Imagine my surprise when I was shown this photo below of James Vincenzo Capone, eldest brother of infamous gangsters Al, Frank, and Ralph Capone, in our Frank Fiske photograph collection. Taken at Fort Yates, North Dakota, it shows James Capone, who by then was known as Richard James “Two Gun” Hart, surrounded by confiscated liquor stills. Immediately I had questions: How did a Capone brother end up in North Dakota as a Prohibition agent? And how did this photo come to be taken by the early 20th-century photographer Frank Fiske? I began searching through our newspaper holdings as well as the vital records available on Ancestry.com to learn more. 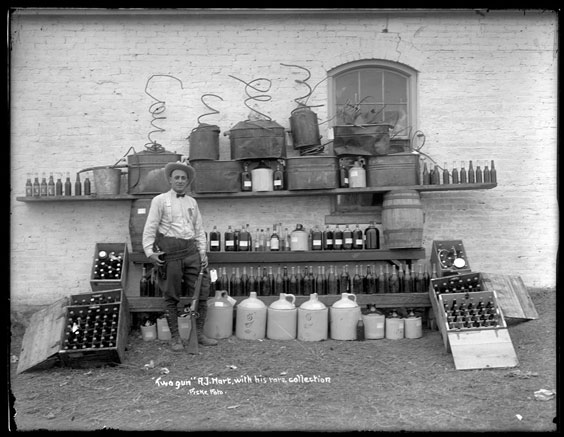 I soon found out that this Capone had immigrated in 1893 with his parents to the United States where the rest of his eight siblings were born. At age 16 James left New York to make his life out West, choosing to distance himself from his Italian heritage by eventually changing his name to Richard James Hart. He married Kathleen Winch in 1919 and worked as a Prohibition agent in the western Plains states.

Meanwhile, Frank Fiske was born in 1883 at Fort Bennett, Dakota Territory, and grew up around Fort Yates. He learned photography from S.T. Fansler at Fort Yates and though still a teenager took over the studio after Fansler left town in 1900. Fiske would continue to work out of Fort Yates, save for a few brief periods, until his death in 1952. While Fiske was best known for his portraits of Native Americans, the true relevance of his photographs comes from his documentation of everyday life at Fort Yates and the Standing Rock Indian Reservation. 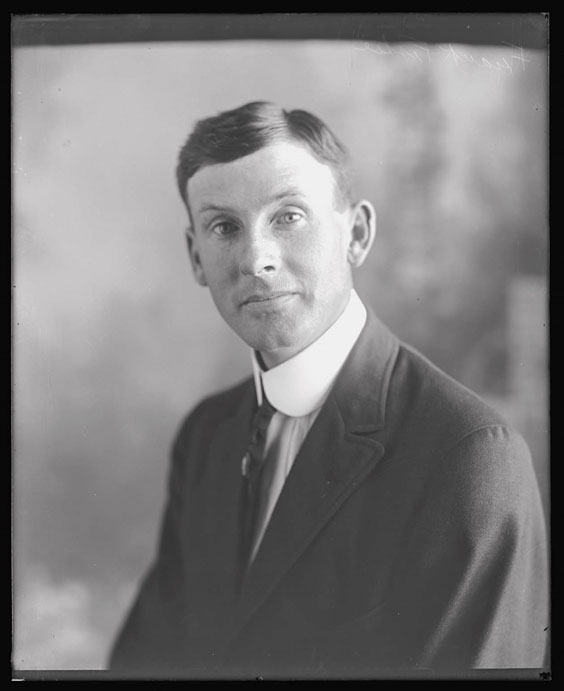 As former Photo Archivist Sharon Silengo has noted of his legacy: “Fiske produced pictures of the life that the Sioux of the Standing Rock Reservation really lived—they were involved in celebrations when allowed by the government agent, they competed in rodeos with other cowboys, they performed in bands on instruments that they were taught to play in their boarding schools, and they married in the white way including wearing the garb of a fancy wedding dress and dress suit, not their traditional dress that would have been worn in the past. These are photographs of the reality of life for Indians.” 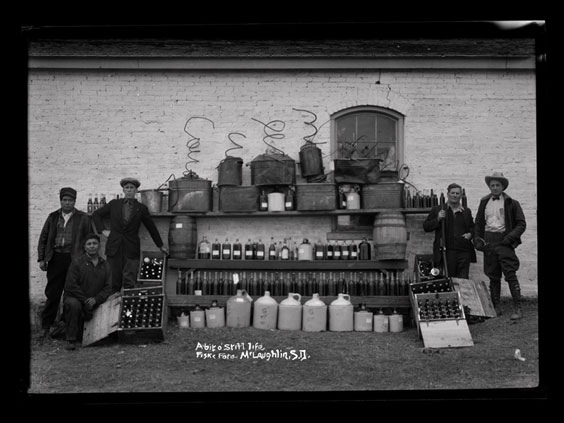 While we don’t know much about their relationship, Fiske and Hart’s paths crossed when Hart was a special agent for the Bureau of Indian Affairs, working alongside Fort Yates Superintendent Eugene D. Mossman to confiscate illegal stills and liquor in the Standing Rock Indian Reservation and surrounding areas. In January 1926, the Sioux County Pioneer reported that a series of raids on the reservation conducted by Mossman netted “many victims besides a lot of evidence and other paraphernalia.” Hart and officer Jersey Grey Bear picked up farmer Frank Slawa and “confiscated a five gallon jug of moonshine.” One of these raids was reported to have resulted in the removal of 25 gallons of alcohol from the reservation. Due to his skills, Hart was described by the paper as “a most crafty enforcement officer.” Fiske’s photographs make it clear just how much was confiscated in such a short period of time.

The photographs taken of the raid spoils and officers also shed light on one facet of the reservation life that Fiske would spend his life documenting. The photos preserved these events and speak to the impact Prohibition had on the Standing Rock Indian Reservation. Interestingly, according to records in Fiske’s business ledger, Hart purchased 12 postcards of these photographs of him for a total of $5.00. 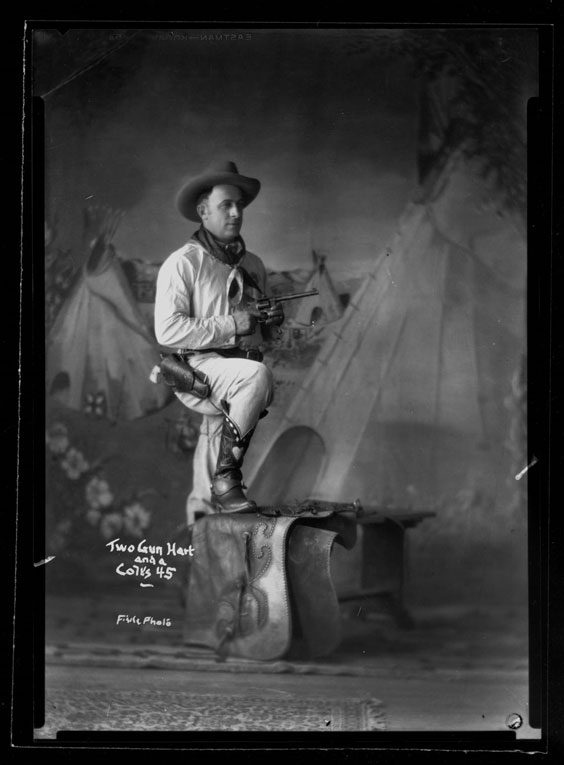 As for Hart’s efforts to keep his identity under wraps, a year before his death in 1952 his secret as a Capone was revealed to the nation when he was subpoenaed to appear before a jury in his brother Ralph’s tax evasion case. Fiske also passed away in 1952, and one can’t help but wonder what he might have thought about the revelation or if he already knew?