Working with archives collections, that is, with books, papers, photos, and other two-dimensional records, is a gift unto itself. These are the actual documents interacted with by people of the past and are a part of our history! We learn cool facts as we process and use these collections. We also often see items of interest. Whether that means uncovering a surprising historical event or discovering something unexpected, our memorable finds fuel conversations and entertain us. However, these finds also provide us with a more personal insight into the history we are working with and the people who used these records.

Below you’ll find some unforgettable items our staff has come upon over the years while working in archives and libraries. 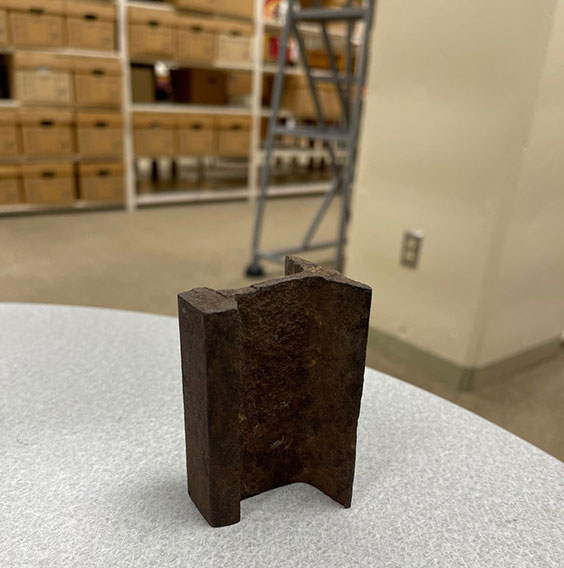 The most memorable thing I have found was in the Great Northern Railway Company, Minot Division, Engineering Department Records (MSS 10104). The collection consists of field notebooks, which I rehoused. During this process, I discovered what looked like a piece of railroad track being used as a spacer to keep notebooks upright in a box. I worked with this collection prior to being hired on full-time, so I also consider this item a neat memory of my days as a volunteer.

Hidden Behind the Frame

The most memorable finds in collections for me have been risqué photos. I have happened upon these several times, hidden behind framed photos or just loose among papers. I wonder about the circumstances that led to these materials being left in a collection donated to a public institution. Whether to keep these items as part of the collection sparks lively debate among our staff, harking back to our ethics lessons in school; that is a topic for another blog post. 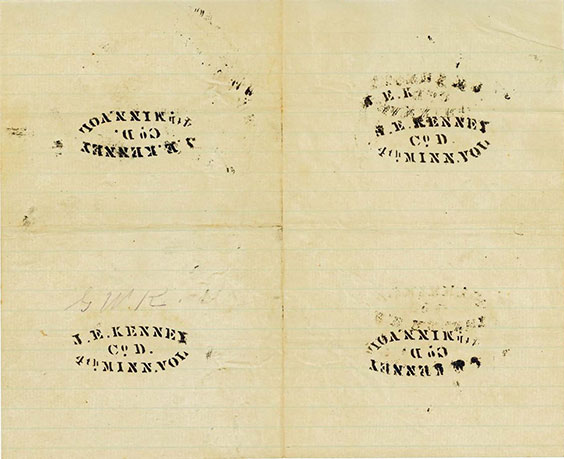 One find that stands out for me is an example of a personal stamp used by Joseph Edwin Kenney, a soldier in the 4th Minnesota Infantry Regiment during the Civil War. The impression, as shown in this image, is part of the Kenney Family Papers (MSS 11371) at the State Archives. The stamp itself is not part of the collection. I have worked with manuscripts of Civil War soldiers for years as part of my academic research, and I have never encountered something of this nature. Possible uses for the stamp include marking his clothing, equipment, and personal items. Joseph gave his life in defense of the Union during the Vicksburg campaign in May 1863.

We received some urine sample collection holders from a state agency as part of a human resources termination case. The State Archives was not supposed to receive the containers, and they were returned for proper disposal. One wonders why the containers were kept once the proceedings were over. Thankfully, they were empty!

A North Dakota Connection to a Film Set in Africa 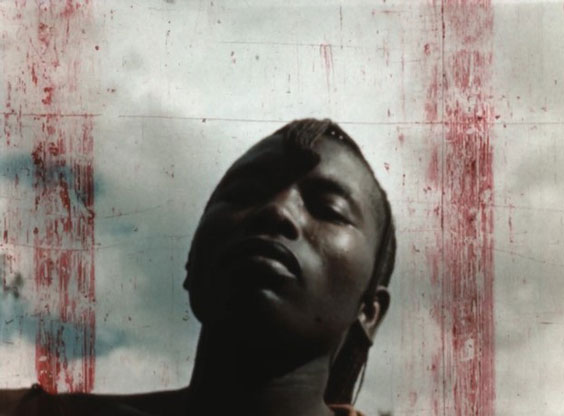 The most memorable item I have discovered at the State Archives is an unfinished, unreleased film entitled “Alice in Africa” (MSS 10782, Bill Snyder Films Collection) produced and directed by Arch Oboler. North Dakota filmmaker Bill Snyder worked for Oboler in Africa during the late 1940s, which is how the film made its way from the continent to North Dakota. “Alice in Africa” centers on a white American woman (played by Oboler’s wife, Eleanor Oboler) who travels through Kenya, Uganda, and the Congo. While the film, which depicts activities and ceremonies of the Maasai, Kamba, and Tutsi tribes, does portray East Africa and its peoples from a white, colonial perspective, it is nonetheless a visually stunning work and an important piece of motion picture history. It represents an early example of a Kodachrome color reversal film of East Africa shot by Westerners.

It’s hard to pin down just one memorable find. However, I would be remiss if I did not mention a recent surprise. While researching a collection, I discovered folders full of copies of fingerprints! Not a lot of paperwork accompanied them, but it was cool to see some old-school sleuthing kept in our Archives. 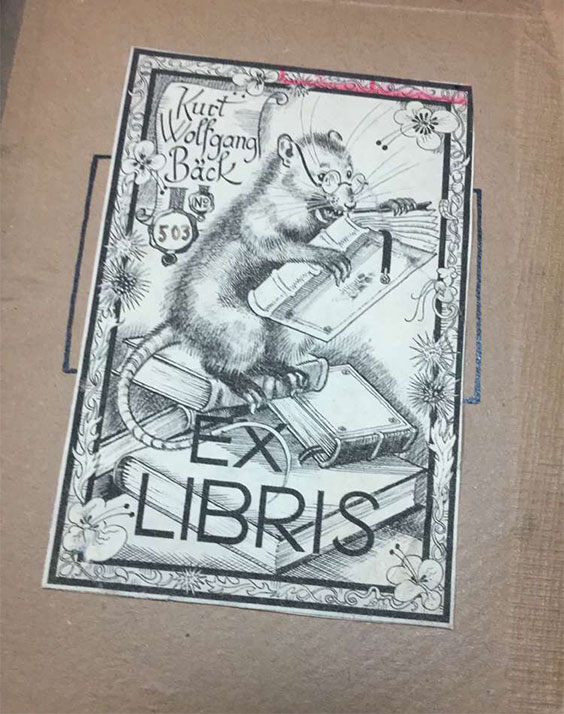 Some of the most memorable things I have found come from my time processing new book acquisitions at a previous job in the Department of Special Collections at the University of Wisconsin-Madison Libraries. My favorite part was checking to see if the book had a bookplate. A bookplate is a decorative label inside the front cover of a book showing who owns it. While printing your name would suffice, why wouldn’t you choose to design a bookplate that reflects your unique personal style and interests? Above is one of my favorites. I hope to find more weird and wonderful bookplates here at the State Archives. 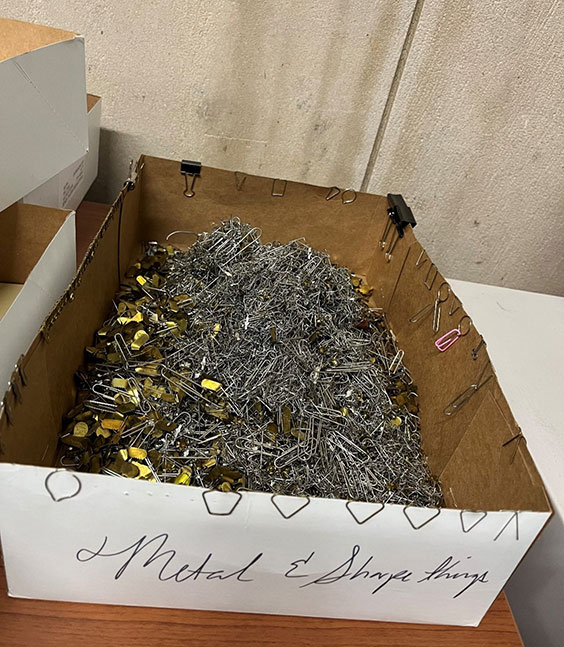 This is the reason why archivists need up-to-date tetanus shots! I keep this box of paperclips (usually of the sharp or questionable variety) beside my desk and, as you can see, use it regularly to collect the many varied things used as fasteners I find while going through collections.

Admittedly, the best part of my job is the opportunity to organize and create exhibitions. I love the creative forces involved in producing an exhibition—discovering new stories, collaborating on storylines, and working with our team to devise original ways to interpret exhibition themes. Then there is the “stuff” of exhibits, the wonderful objects from which the stories spring. I have long enjoyed working with objects and exploring the “chatter” and relationships that exist between them. It is also deeply gratifying to see how gallery visitors respond to and move through an exhibition. Once you open the gallery doors, exhibitions take on a life of their own.

The care and maintenance of an exhibition’s life cycle is also an important component of my job. We often revisit an installation, adjusting elements that need additional attention. This may include switching out an interpretive panel that is problematic or simply correcting a typo. It can mean adjusting an audiovisual component, refocusing a light, replacing a video monitor that is acting up, or even something as simple as lubricating a squeaky hinge.

The exhibition’s life can also entail adding new components. At the State Museum in Bismarck, just one of about a dozen of our exhibition areas across the state, we are currently working on an upgrade to the Industry & Energy section of the North Dakota story in the Inspiration Gallery: Yesterday and Today.

Two display fixtures donated by Continental Resources will be used to expand the narrative about the role of core samples within the petroleum industry. This involves reconceptualizing the exhibition space as well as developing new interpretive text and selecting accompanying photographs. Fortunately, we were able to draw from a series of photographs of the Williston Basin produced by Susan Tadewald for the State Historical Society of North Dakota Foundation. 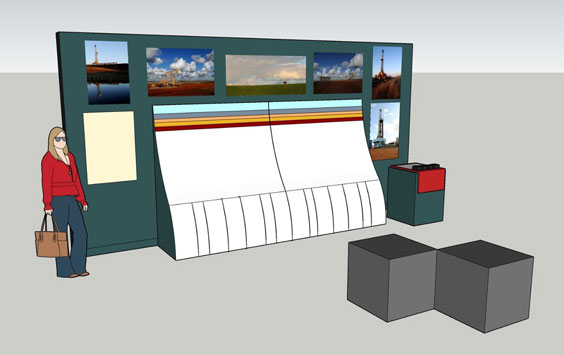 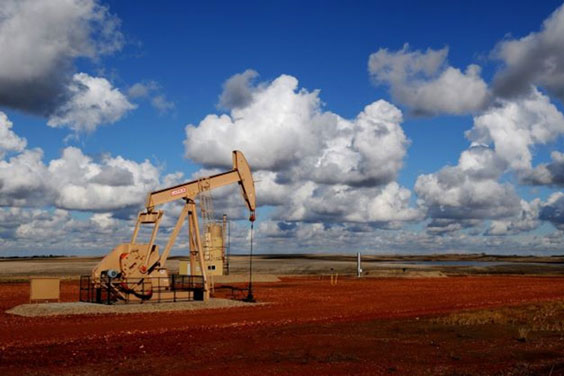 The addition to the energy display also allows us to repurpose an existing interactive station and expand the current footprint of the display.

This project piqued my interest as it ties into my background. My late father was a geophysicist who worked in the petroleum industry and part of his job entailed interpreting seismic records and core samples. Indeed, core samples even served as decorative objects around my childhood homes. Later in my professional life, I encountered a custom-made dining table with a topographic map etched into its glass surface, supported on an undulating pedestal base made of core samples.

Maintenance issues relating to the physical structure of the ND Heritage Center have also triggered several recent exhibition projects. We are currently undergoing an extensive upgrade to the security system that monitors both the exhibition galleries and the public spaces. The upgrade involves removing the cables and cameras for the current system and installing the new system’s components. Contractors are running cables throughout the building, which necessitated the temporary removal of exhibition elements in a couple of galleries to ensure the safety of the museum objects.

Work in the James E. Sperry Gallery required completely deinstalling the exhibition The Prairie Post Office. Accessing the existing security cables meant opening several walls and a portion of the ceiling. Once the work was finished, crews installed and painted new walls and the existing carpet was replaced. When the new carpet, paint, and adhesives cure and off-gas, we will reinstall the exhibition. 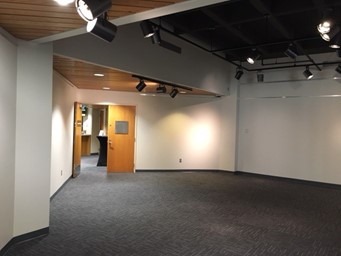 The refreshed Sperry Gallery awaits the return of The Prairie Post Office.

A similar situation occurred in the Governors Gallery. A portion of Fashion & Function: North Dakota Style was deinstalled to allow contractors to pull cables in that space. The Wedding March section was temporarily removed to protect the objects and allow contractors to move a power lift into the space to access the ceiling. As soon as we get the “all-clear” from the contractors, we will reinstall the platforms and wedding gowns.

Eventually these gallery disruptions will result in an improved exhibition environment. A feature of the new security system is that it generates a heat record for each gallery based on the amount of time gallery visitors linger at any feature, allowing us to see how gallery visitors interact with a space. Hot spots will identify popular areas, and cooler zones may indicate the need to rework a component or reconsider the objects or storyline being interpreted.

Sometimes nature impacts the exhibition’s life. Some of you may recall the flooding that occurred last fall in the Adaptation Gallery: Geologic Time, resulting in part of the gallery’s temporary closure. The flooding was due to the combination of a flat roof, heavy rain, and a failed drain. As part of an effort to mitigate future flooding, the tail section of the Triceratops was recently deinstalled to allow access to the drainage pipes above that portion of the gallery. Connections were tightened and the drain and pipes tested to ensure there won’t be any additional leakage in the future, and the Triceratops got its tail back. So all is good! 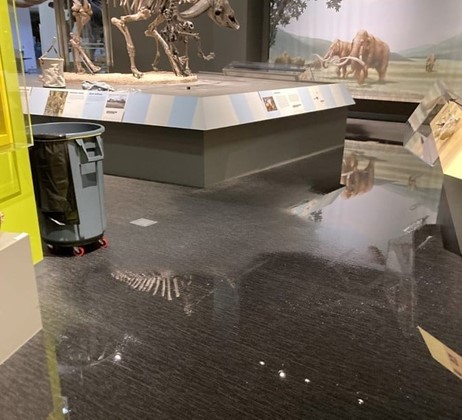 Exhibition maintenance is a constant and occupies a remarkable amount of time and resources. The Treehouse interactive and learning space on the upper level above the Missouri River Event Center requires almost daily maintenance. We often marvel at how the “unbreakable” gets broken and how even steel bolts are sheared in half. But then we remember the “unsinkable” RMS Titanic and remind ourselves we must always temper our expectations against reality.

In addition to ongoing maintenance projects, we are also working on upcoming exhibitions. On the Edge of the Wind: Native Storytellers and the Land premiers in late April 2023 in the Governors Gallery. The planning and preparation for the new exhibition is well underway. To date, it has already been a two-year production partnership between the State Historical Society and the North Dakota Council on the Arts, with State Folklorist Troyd Geist conducting fieldwork for the project for more than eight years. On the Edge of the Wind will see a complete reinstallation of the Governors Gallery. 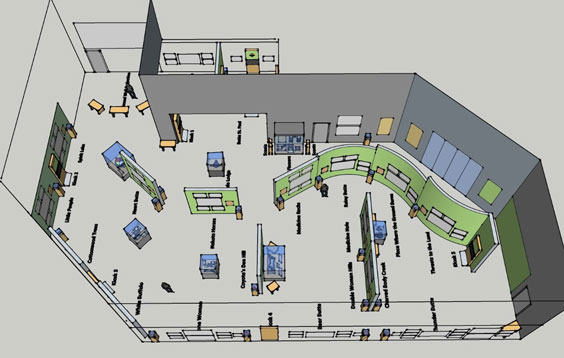 Governors Gallery layout for On the Edge of the Wind, which will open in spring 2023.

With all this planning and maintenance, life is never dull. It may be a bit frantic at times, but it is never dull!