I have the coolest job ever! As a curator at the State Museum, I get to work with and protect artifacts that run the gamut of “cool,” from moon rocks to antique cars. The reason I get so excited about what I do is that I am a tactile person. For me it’s one thing to read about the Battle of Little Big Horn in a high school history book and a completely different thing to hold in my hand an actual bullet that was fired at the battle. That bullet was there. It was a witness to, even a participant in history. It gives an abstract idea a physical form. That is exactly why we use artifacts in our galleries—to provide that connection for people and get them excited about North Dakota’s history.

As you’re walking around any museum, you’ll probably see at least one sign that says, “Please Do Not Touch.” I understand the temptation to touch. People see something in the gallery, and maybe it provides the connection for them that it does for me, so they reach over a barrier and touch it. When you touch an artifact, it doesn’t crumble away into dust and gives no immediate reaction. However, given enough time, 5-10 seconds of contact can cause a surprising amount of damage.

When handling artifacts, museum staff uses gloves. The main reason is that we all—myself included—have oil, sweat, dirt and other residues on our hands, even after washing them. Given enough time and contact, those residues build up. That is especially true for museum artifacts, because cleaning them requires a great deal of care and should rarely be done. The cornerstone you see below has been on display in our main gallery for many years, but that brown residue you see along the top edge wasn’t there when the stone went on display. It is oil, sweat and dirt that have built up from decades worth of touches. 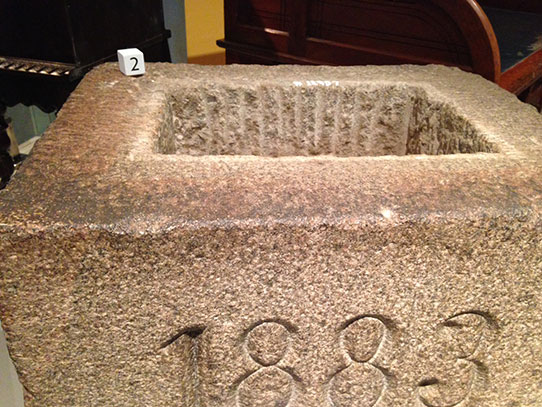 The brown residue you see along the top edge of the cornerstone is the built-up dirt, oil, and sweat from decades worth of touches while it has been on display. It is the cornerstone of North Dakota’s first state capitol building, which burned in 1930.

Some materials react to the oils found on the skin. Notice the fingerprint on this piece of copper seen below. It has caused corrosion on the surface of the metal that is very difficult, if not impossible, to remove, meaning someone’s fingerprint will probably be etched into the surface forever. 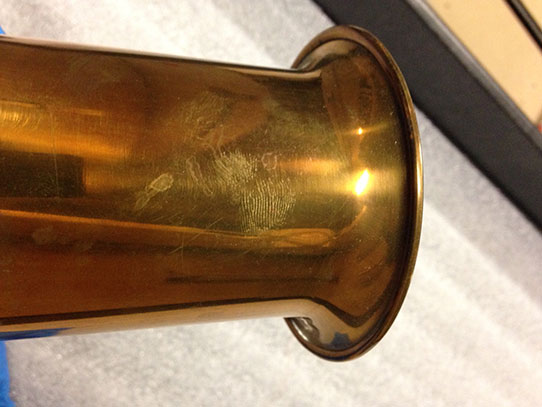 You can see the fingerprint on the side of this copper artifact. The oils in your skin can react with some metals and given enough time, can permanently oxidize a fingerprint onto the surface.

Some artifacts are dangerous to touch. Many older taxidermy mounts were prepared using arsenic, because it kills insects that might otherwise feed on the specimen. Arsenic is also quite poisonous to humans, and some mounts in our collection have tested positive for arsenic contamination. You should never touch a taxidermy specimen that you see in a museum, because you may get a little more than you bargained for. 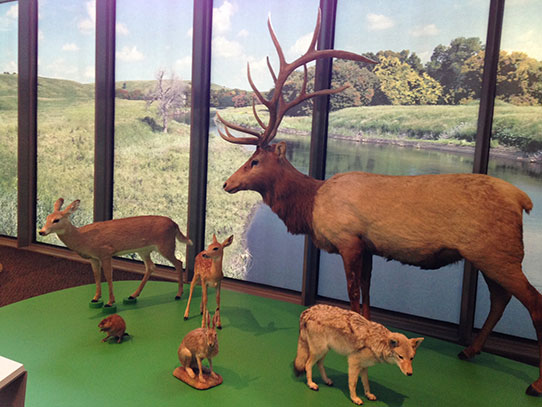 Arsenic was used as a preservative in many older taxidermy mounts, because it kills insects that might otherwise try to eat the mount. Some of the specimens in the state museum’s collection have tested positive for arsenic and many others show signs of contamination. That is a very good reason to never touch taxidermy specimens in museums and take care when handling any mounts in private collections.

On the leg of this elk, which you can see in our Early Peoples museum gallery, an area of fur and skin has been worn away by people rubbing the fur. Unfortunately, some of them probably took home a bit of arsenic. 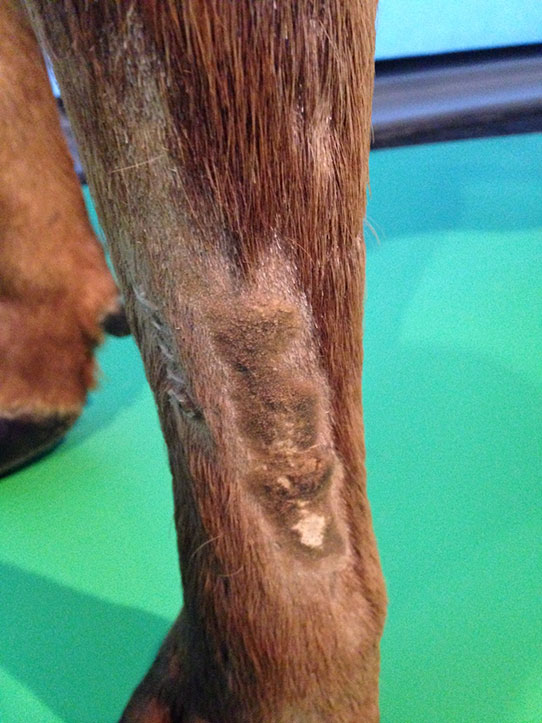 The image above shows the leg of the elk mount from the previous photo. We know he was on display for many years, and visitors apparently enjoyed touching his leg! The fur and even some of the skin are worn away. You can really see the damage that can happen with enough time and enough contact.

When you resist the temptation to touch an artifact, you are helping us to preserve it for future generations to see and enjoy, and you may be keeping yourself safe as well!

Why We Save Them

As a Historic Sites Manager for the State Historical Society, it is easy for me to recognize why historic buildings are worth saving. I appreciate all of the historic sites we have in North Dakota, but I have a certain soft spot for the Stutsman County Courthouse State Historic Site in Jamestown. The courthouse, while certainly beautiful and filled with the ornate details that make people fall in love with old buildings, has captured my heart for a completely different reason.

This is the story of a building…

In 1883, the Stutsman County Courthouse was completed in what was set to be the capital of North Dakota. Built atop the tallest hill in Jamestown, she is three stories high with one large courtroom flanked by two circular stained glass windows. It is a building meant to inspire and impress.

When I was hired to manage this site (among others), I dove headlong into its history. The courthouse was operational for almost a century, housing not only the courtroom, but the county auditor, school superintendent, and treasurer’s offices. But no historical building exists without strife. Since the birth of architecture, as long as a building stands, there also stands someone who wants to tear it down. In 1983, a new courthouse was completed for Stutsman County and the 1883 building was abandoned. At this time, Stutsman County commissioners voted to demolish the historic courthouse in favor of a parking lot to accommodate the new building.

In the years that followed, the city of Jamestown was divided, and the battle for the courthouse played out in the media. During this contentious time, a group of local citizens, known as the 1883 Courthouse Committee, vowed to save the historic building. Due to their heroic efforts, the building was placed on the National Register of Historic Places by the State Historical Society of North Dakota. Since the courthouse was state property, the North Dakota Century Code required approval of the State Historical Board prior to destroying historically significant state property. The board did not approve the demolition of the courthouse.

But the wrecking ball still loomed. Shortly afterwards, the county challenged the board’s ruling and the case ultimately reached the State Supreme Court. After a lengthy court battle, the Supreme Court ruled in favor of the Board and the courthouse was saved. We acquired the building in 1985 and immediately got to work.

What work, you may be asking? Well, imagine what would happen if you left your home standing for a four-year period—the length of time it took the courts to decide the building’s fate. During that time, it stood unheated as pigeons gained access through broken windows, rain gutters remained clogged, and water carried down the walls of the building, causing further degradation of the soft brick and mortar. 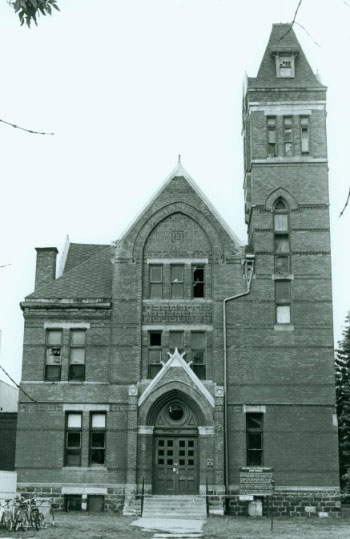 The Stutsman County Courthouse was left vacant for several years, while a court battle decided her fate. During this time the building deteriorated greatly.

In the years that followed, we began to implement a rehabilitation plan for the building, and the Courthouse Committee began an ambitious fundraising campaign.

In the 1990s almost one million dollars were raised to repair the exterior of the courthouse. In recent years, we have invested $400,000 into the interior rehabilitation. The project is nearing completion. Still left to complete are plumbing and electrical upgrades—crucial elements to a working, usable building. 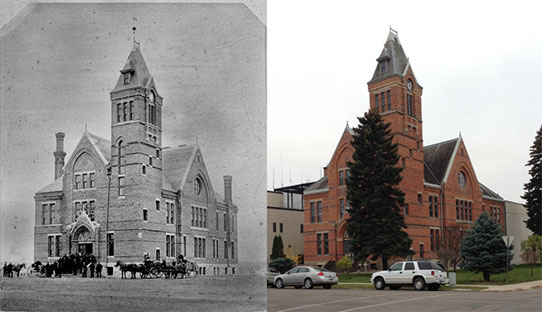 The courthouse stands today as it was built in 1883. (Image courtesy of the State Historical Society of North Dakota Archives, 1005-0002)

So why did we save it?

The Stutsman County Courthouse has great historical significance. It is not only the oldest courthouse in North Dakota—it is the oldest public building in North and South Dakota. Meetings were held there in preparation for the creation of the state of North Dakota. The courthouse truly is the birthplace of statehood.

Once restored, the courthouse will be a beautiful addition to the city of Jamestown and state of North Dakota. It will operate as a historic site, educational facility and community center. As a historic site, it will tell the story of Dakota Territory, local government and how courthouses play an integral role in communities and families. As a community center, it will house weddings, concerts, meetings, and area events. 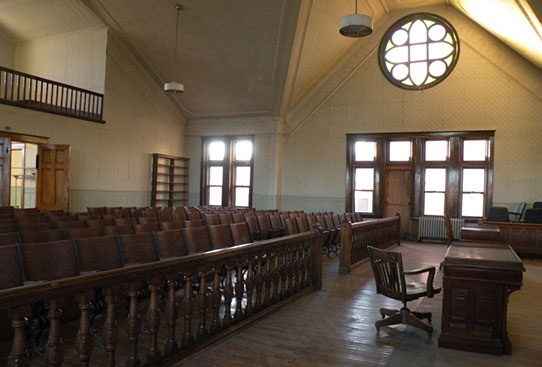 The courtroom of the Historic Stutsman County Courthouse will be a great location for community events.

It is our heritage.

Walking into this building, it feels like 1883. The walls are tin, the old wood floors are scuffed and the stair treads worn. One can feel the presence of early North Dakotans—and the significant decisions that were made within those walls. More importantly, you can feel a connection to a building that has fought to stay relevant in a world that wants to tear it down. 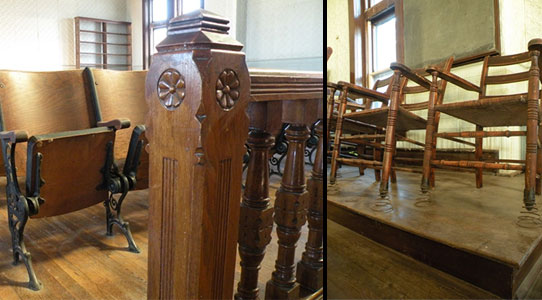 Left: Much of the hand carved wood remains at the historic courthouse.
Right: The original jury chairs in the courtroom—note the springs on the front two legs.

In September 2014, we held an open house to invite the community of Jamestown back to the courthouse.   The 1883 Courthouse Committee and State Historical Society ambitiously planned for 200 people. At the end of the day, over 1,000 people came through the doors in just four hours. We were completely overwhelmed and surprised by the community’s support for the old building. People told us stories of adopting their children in the courtroom, obtaining their marriage and driver’s licenses there, and shared with us a plethora of other great memories. Most people had never set foot inside the building, while for several others, it had been at least three decades.

There is much work yet to be done. It will take time and many hands. For 30 years, the Stutsman County Courthouse has waited. She will soon have her day.